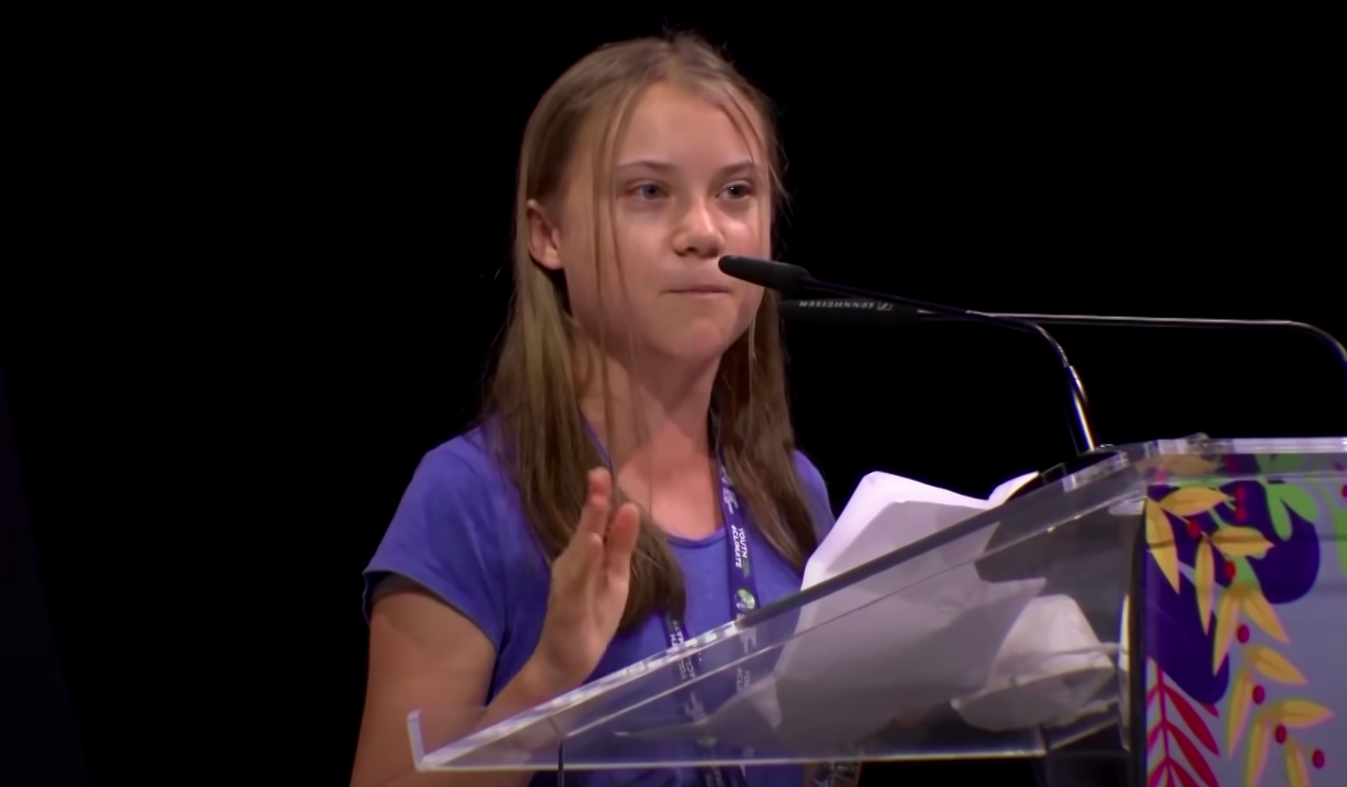 Swedish climate activist Greta Thunberg speaks at the Youth4Climate event in Milan, Italy, on Tuesday ahead of the COP26 climate talks. Screenshot from video
Previous story
Next story

For a moment, Greta Thunberg sounded like a different activist than the one the world was used to seeing.

"Climate change is not only a threat. It is, above all, an opportunity to create a healthier, cleaner and greener planet which will benefit all of us," the Swedish climate activist said with a bright smile while speaking at the opening session of Youth4Climate event in Milan, Italy, on Tuesday.

Thunberg's uncharacteristically corporate-sounding lines, it turned out, were meant to show the emptiness behind politicians and business leaders' slogans when they speak about climate change.

"Thirty years of blah, blah, blah," Thunberg said acerbically. "Net zero by 2025. By 2050! This is all we hear from our leaders. Words that sound great, but so far have led to no action. Our hopes and dreams drowned in their empty words and promises. Over 50 per cent of all our CO2 emissions have occurred since 1990, and a third since 2005."

Thunberg slammed global leaders for not backing their slogans and speeches with concrete action, and said tackling climate change would not be as simple as creating new green jobs, but that the deeper social roots of environmental destruction had to be addressed.

"Climate crisis is only the symptom of a much larger crisis... of inequality that dates back to colonialism and beyond. A crisis based on the idea that some people are worth more than others, and therefore have the right to exploit and steal other people's lands and resources. It is very naive to believe we can solve this crisis without confronting the roots of it," she continued.

She said the time to let politicians decide what is "politically possible" has long passed, and suggested a popular movement is needed to force governments to make the drastic changes needed to avert catastrophic impacts of a warming climate.

"We can no longer let the people in power decide what hope is," she said. "Hope is not passive. Hope is not blah, blah, blah. Hope is telling the truth. Hope is taking action. Hope always comes from the people. We want real climate action and we want climate justice."

Watch the full speech below.

"Thirty years of blah, blah, blah... Our hopes and dreams drowned in their empty words and promises," Greta Thunberg said Tuesday in a #Youth4Climate speech ahead of #COP26. #ClimateCrisis

“We can no longer let the people in power decide what hope is. Hope is not passive. Hope is not blah blah blah. Hope is telling the truth. Hope is taking action”
My speech at #Youth4Climate #PreCOP26 in Milan. pic.twitter.com/BA62GpST2O

are you listening j. t.? are

are you listening j. t.? are you willing ti di anything meaningful wilkinson?

I guess she doesn't do

I guess she doesn't do backpats.

There really is a lot going on - installation of renewable electricity generation is on an exponential upswing, 2020 was generally bad for production, with "only" the same 6GW of windfarms installed as in 2019. But 2021 is picking up the slack with DOUBLE that going in this year, 12GW.

The larger world really is responding to the crisis, even if so-called "leaders" are still mostly doing empty messaging, as they do with most problems.

We cannot deceive ourselves

We cannot deceive ourselves here!! Searching through the mountains of information produced by organizations that examine exhaustively what's going on behind said "leaders'" spew reveals some terrible truths! Sure, some easy cosmetic activities have taken place, BUT none is even remotely close to what is needed!!
For example, now that it's out about the truth behind the Trudeau government's actions in court against Indigenous children, which has been going on for many years, it's easy to see how these processes work - the government's mandate is to spend AS LITTLE AS POSSIBLE on whatever service it is to deliver! Of course this invariably costs much more in the long run! How's THAT for conscientious spending of public funds?!!