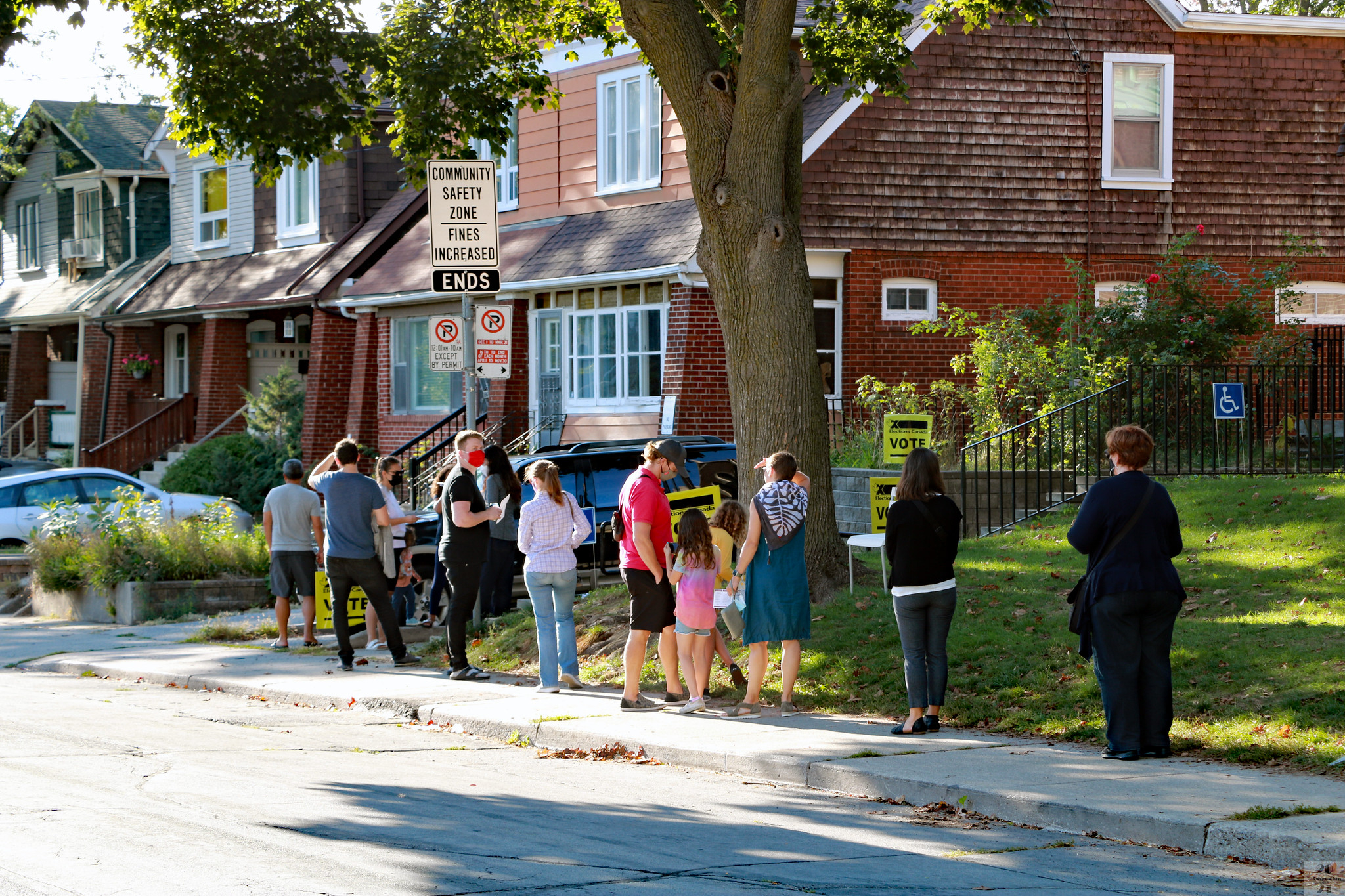 Voters line up to cast their ballots in an election that produced second minority government in as many years. Photo by flickr (CC BY-NC 2.0)
Previous story

And why not? After all, the Liberal minority government had not yet reached the two-year mark, and faced no significant roadblocks in implementing its progressive policy agenda in Parliament.

While the election produced a nearly identical result in the House of Commons, it did signal a more profound development: the dawn of an era in which minority Parliaments have become the norm — not the exception. Since I reached voting age in 2004, five of the past seven federal elections have resulted in minority Parliaments.

Although Canada has enjoyed 13 minority governments since its inception, prior to 2004, they were a relatively rare occurrence. For example, between 1980 and 2004, Canadians elected six consecutive majority governments spanning the prime ministerships of Pierre Trudeau, Brian Mulroney, and Jean Chretien.

There are several factors that explain the prevalence of minority governments since 2004, but chief among them is the dominance of the sovereigntist Bloc Quebecois in Quebec. More than three decades after its founding, the Bloc’s unremitting ability to win anywhere between 30 and 50 Quebec seats in the vast majority of elections make it difficult for either the Liberal or Conservative parties to form majority governments.

On balance, minority Parliaments lead to far more cross-party collaboration; they are also arguably more responsive to the democratic will of the majority when they operate in good faith.

As an impressionable 18-year old, I worked as a House of Commons page in the 2004-05 minority Parliament — the first in 25 years. What I witnessed standing on the floor of the House of Commons day after day was toxic partisanship, procedural manoeuvring from all parties designed for political gain, and the official Opposition’s unrelenting mission to derail the Paul Martin government’s legislative agenda.

On balance, minority Parliaments lead to far more cross-party collaboration; they are also arguably more responsive to the democratic will of the majority when they operate in good faith, writes @andrewaperez #cdnpoli #elxn44

To the surprise of many, Jack Layton’s NDP teamed up with the Conservatives and Bloc Quebecois to defeat Martin’s government in November 2005, thwarting the implementation of two seminal legislative accomplishments that had resulted from that minority Parliament: a national child-care program and the Kelowna Accord.

The three minority Parliaments that have ensued since my experience as a page have fared only marginally better. While former prime minister Stephen Harper headed up two successive minority governments over a five-year period, those Parliaments were also characterized by lethal partisanship and incessant procedural tactics. In addition, neither of the minority Parliaments under Harper’s watch reached the three-year mark.

Harper’s first minority government (2006-08) spanned two years and 208 days, while his second minority government (2008-11) clocked in at just 16 more days, lasting for two years and 224 days. Throughout the Harper era, the responsibility for Parliament’s dysfunction was equally laid at the feet of both the government and opposition parties. In 2008, Harper failed to respect his own fixed election law and triggered an early election, while in 2011, the opposition parties united to vote non-confidence in the government.

If there were ever a credible case to be made for a minority Parliament to remain in place for a full four-year mandate, it would surely apply to the minority Parliament elected on Oct. 21, 2019. Even before the pandemic struck in March 2020, Justin Trudeau could rely on NDP Leader Jagmeet Singh’s caucus to help shepherd his left-leaning legislative agenda through the Commons.

The pandemic’s unprecedented economic and public health repercussions underlined the critical role of activist government overnight. This new reality played to the NDP’s strengths and allowed the party to exert meaningful influence in Parliament while serving as a dance partner for Trudeau’s government as it swiftly implemented a $137-billion pandemic rescue package designed to support individuals, families, and businesses withstand the severe impacts of the pandemic.

Had Trudeau not triggered an election on Aug. 15, it’s likely the last Parliament could have remained in place for another year, if not longer. Given the identical electoral result, and the loss of four female cabinet ministers, it’s likely the prime minister and his brain trust are seriously reflecting on just what the Sept. 20 election accomplished for their government in political terms.

Although one must look back several decades, there are minority governments in Canada that have enjoyed immense political success through the introduction of seminal policies that have since become integral to our country’s identity and fabric. Throughout his five years in office (1963-68), former prime minister Lester Pearson was unable to win a majority government, but nevertheless managed to legitimately transform Canada.

As a result of working closely with the NDP in two minority Parliaments, the Pearson government was introduced a universal public health-care system, the Canada Pension Plan, and the Canada Student Loans Plan. In this period, Pearson was also instrumental in bringing Quebec into the Liberal fold, promoting bilingualism and biculturalism, and perhaps most memorably, instituting a new national flag: the Maple leaf.

Four years after Pearson left office, Pierre Trudeau found himself leading a razor-thin minority government that had won only two more seats than Robert Stanfield’s PCs in the 1972 federal election. In the two years that followed, Trudeau relied heavily on David Lewis’s NDP to pass his legislative agenda. Trudeau notably moved the Liberal Party to the political left during this period, creating the Crown corporation Petro-Canada, due in large part to strong support from the NDP. In 1974, Trudeau’s Liberals were rewarded for their cross-party collaboration, winning a large majority government.

These political precedents demonstrate that minority Parliaments can not only accomplish much by way of formative public policy, but they can also act as a boon for the governing party. These precedents are relevant to today’s political context where Justin Trudeau’s minority government will presumably rely on support from the NDP to further implement its legislative agenda over the coming years.

The minority Parliament elected on Sept. 20 has the potential to make historic advances for Canadians. If that is to materialize, politicians, pundits, and journalists must refrain from regurgitating the tired, old talking point that minority Parliaments cannot reasonably be expected to exceed 18 to 24 months.

This destructive talking point has proven immensely effective in creating an illusion — in the mainstream media and among the public — that minority Parliaments are futile. That they are inherently toxic and destructive at their core; that only majority governments can deliver political stability. As a result, over the past 17 years, the political and media classes have normalized the notion that minority governments cannot govern beyond a short period of time.

Fortunately, the minority Parliament that will convene later this fall shows great promise. Spooked by his early election call that failed to produce a majority government, it’s likely Trudeau will plan to govern for at least three years. Perhaps more than ever before, opposition party leaders will not want to be seen precipitating an early election in this unique political context.

These are promising signs, but if minority governments are truly here to stay for the foreseeable future, it will be incumbent upon our politicians to work collaboratively over the coming years to ensure this minority Parliament spans a full mandate and delivers concrete results for Canadians.

Party leaders and their MPs must also cease the permanent political campaign that minority governments typically reinforce. Instead, they should focus on working across party lines to deliver good government while respecting voters’ desire for a minority Parliament where no party enjoys a blank cheque.

As citizens, we should demand no less.