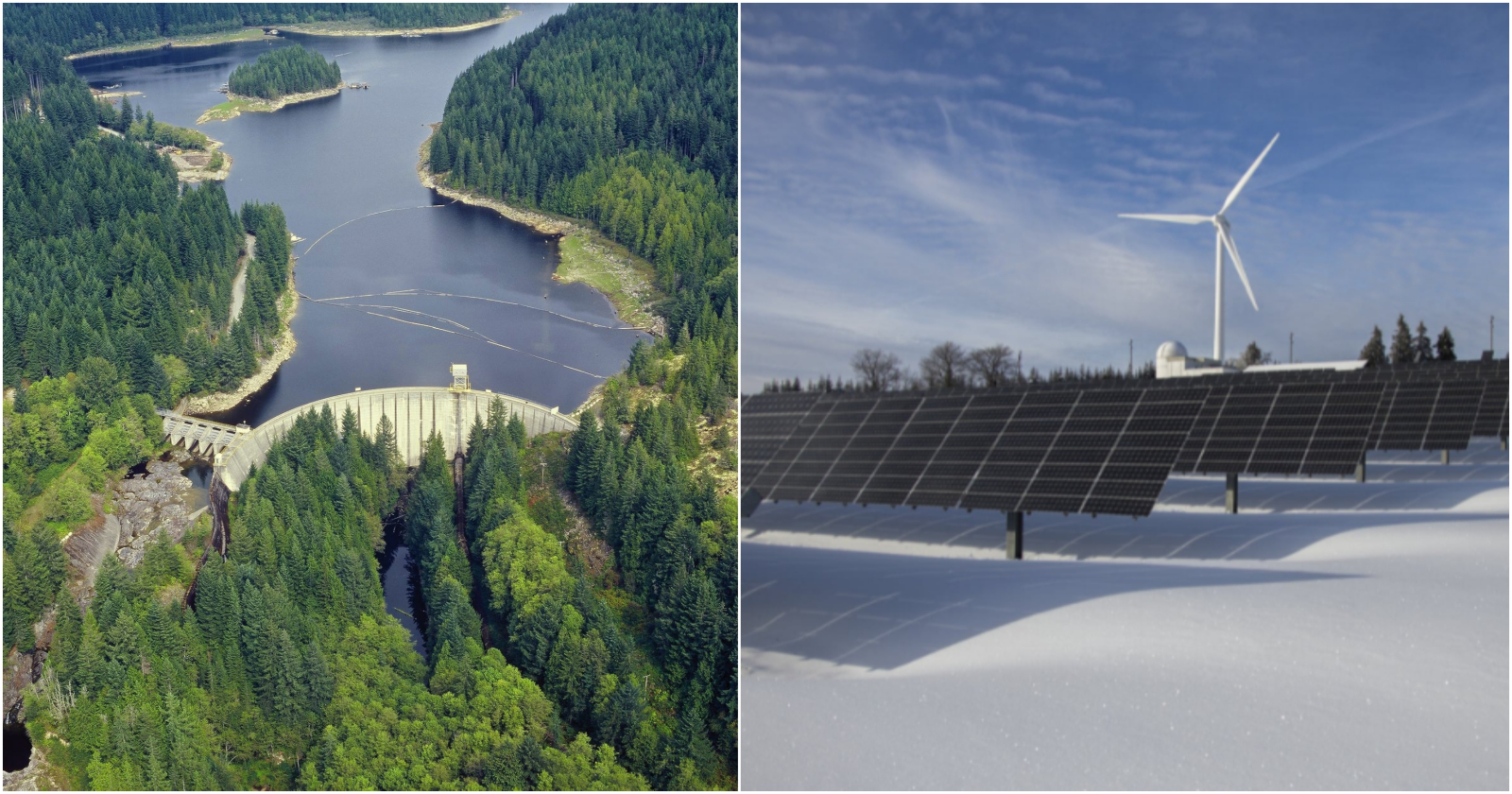 As the UN climate talks draw near, Canada has enormous work left to do to reach its goals of reducing greenhouse gas emissions. Collectively, Canadians have to cut overall greenhouse-gas emissions by 40 to 45 per cent below 2005 levels by 2030 and achieve net-zero emissions across the economy by 2050.

And whereas countries like the U.K. have dramatically slashed their emissions levels, Canada's one of the few nations where emissions keep skyrocketing, and where fossil fuel extraction keeps increasing every year despite our climate targets.

Given its track record, how will Canada achieve its goal of getting to net-zero by 2050?

Getting to net-zero grid through renewable electricity

“If we wanted to be powered by 100 per cent renewable electricity, Canada is one of the countries where this is actually possible,” said Audouin.

She says for that to happen, it would take a slate of clean energy providers working together to fill the gaps, rather than competing for market dominance.

“You couldn't power Canada just with wind and solar, even with batteries. That being said, renewables happen to work very well together ” she said. “Hydropower already makes up more than 90 per cent of Canada’s renewable generation and 60 per cent of the country’s total electricity needs are currently met thanks to this flexible, dispatchable, abundant source of baseload renewable electricity. It isn’t a stretch of the imagination to envision hydropower and wind and solar working increasingly together to clean up our grid. In fact, hydropower already backs up and allows intermittent renewable energies like wind and solar onto the grid.”

She noted that while hydropower alone won't be the solution, its long history and indisputable suite of attributes — hydroelectricity has been in Canada since the 1890s — will make it a key part of the clean energy transition required to replace coal, natural gas and oil, which still make up around 20 per cent of Canada's power sources.

Canada's vast access to water, wind, biomass, solar, geothermal, and ocean energy, and a federal government that has committed to climate goals, makes us well-positioned to lead the way to a net-zero future and eventually the electrification of our economy. So, what's holding the country back?

The new reality for renewables

According to Clean Energy Canada, it's possible to grow the clean energy sector, but only if businesses invest massively in renewables and governments give guidance and oversight.

A recent modelling study from Clean Energy Canada and Navius Research exploring the energy picture here in Canada over the next decade shows our clean energy sector is expected to grow by about 50 per cent by 2030 to around 640,000 people. Already, the clean energy industry provides 430,500 jobs — more than the entire real estate sector — and that growth is expected to accelerate as our dependence on oil and gas decreases. In fact, clean energy jobs in Alberta are predicted to jump 164 per cent over the next decade.

Currently, provinces with the most hydropower generation are also the ones with the lowest electricity rates. Wind and solar are now on par, or even more competitive, than natural gas, and that could have big implications for other major sectors of the economy. Grocery giant Loblaws (which owns brands including President's Choice, Joe Fresh, and Asian grocery chain T&T) deployed its fleet of fully electric delivery trucks in recent years, and Hydro-Québec just signed a $20-billion agreement to help power and decarbonize the state of New York over the next 25 years.

In The New Reality, Smith writes that many carbon-intensive industries, such as the mining sector, could also potentially benefit from the increased demand for certain natural resources — like lithium and nickel — as the world switches to electric vehicles and clean power.

“Oil and gas may have dominated Canada’s energy past, but it’s Canada’s clean energy sector that will define its new reality,” Smith emphasized.

Despite its vast potential to be one of the world's clean energy leaders, Canada has a long way to getting on the path to net zero. Even though the country is home to some of the world's leading cleantech companies, such as B.C.-based hydrogen fuel cell providers Ballard Power and Loop Energy and Nova Scotia-based carbon utilization company CarbonCure, the country continues to expand fossil fuel extraction to the point that emissions are projected to jump to around 1,500 MtCO2 worth by 2030.

“We still are a resource-based economy, and one of the largest emitting countries of greenhouse gases per capita in the world,” Audouin said. “Climate targets are one thing. But we now have the right environment, we have the right policies... Everybody's getting on board the climate bus. What we need now is strong action to propel renewables centre stage.”

Join Canada’s National Observer on Oct. 21 to discuss how Canada will get to net-zero emissions by 2050. Register here.

Is there a path to net zero without nuclear power?

According to Natural Resources Canada, electricity supplies 17 % of our energy used. Oil & gas 77% . As the article states hydro supplies 60%
of that electricity, or just over 10% of of our total end use energy
Our hydro Resources are pretty much developed and huge cost overruns in Newfoundland, Manitoba and BC make hydro a gamble.
So my question is how do we replace this 77% oil and gas , never mind in 10 years, or 30 years. Not a chance. Provincial Premiers in ON , SK, MB AND AB are still busy debating whether climate change is real and they represent about 55% of Canadians. Lack of leadership is a major problem and obstacle. Renewable wind and solar cannot pick up 77 % in decades. The UK is granting their home owners 5000 to switch to electric home heating heat pumps. Electric cars, trucks and transportation! In a decade? I believe in Climate Change yet when I read Canada is the 3rd largest hydroelectric generator in the world, I wonder how in heck are the other 170+ countries going to stop using fossil fuels when they are a 100% dependent on them

In short, we could lead the

In short, we could lead the way to a decarbonized future, but instead we're increasing our fossil fuel extractions and leading the way to hot house earth. How progressive!

It is FAKE NEWS if you

It is FAKE NEWS if you dislike fossil fuels. Oil & Gas still are the liife-blood of Canada Economy & Jobs. They are free Gifts from NATURE.
The Problem is the Combustion of fossil fuels : CO2, Carbon Dioxide.
In 2005 SASK POWER and friends captured the CO2 from Boundary Dam Power Plant in a CCS, tall Vertical Absorber. From a simple sketch from Scottish Power we developed a Horizontal Absorber to fit with every Locomotive, Ship and Power Plant to capture tonnes of CO2 I visited Engineers in Edmonton, Calgary and Saskatoon and wrote to a dozen Canadian Universities. One, female Engineer at YORK U replied, but not her field. Calgary said if I funded $3thou they would check it out to Level 3. Here is Natures Solution (free, we must save the Earth, not make money) Pass emissions thro horizontal pipes, at the end withdraw the heavy, captured CO2 at the bottom for further separation. Waste gas exits at the top of the round pipes. We need a school to test an Unit If you are an endentured Professor or have a well paid job I know you are too busy.- .
Richard Troy, P.Eng., -