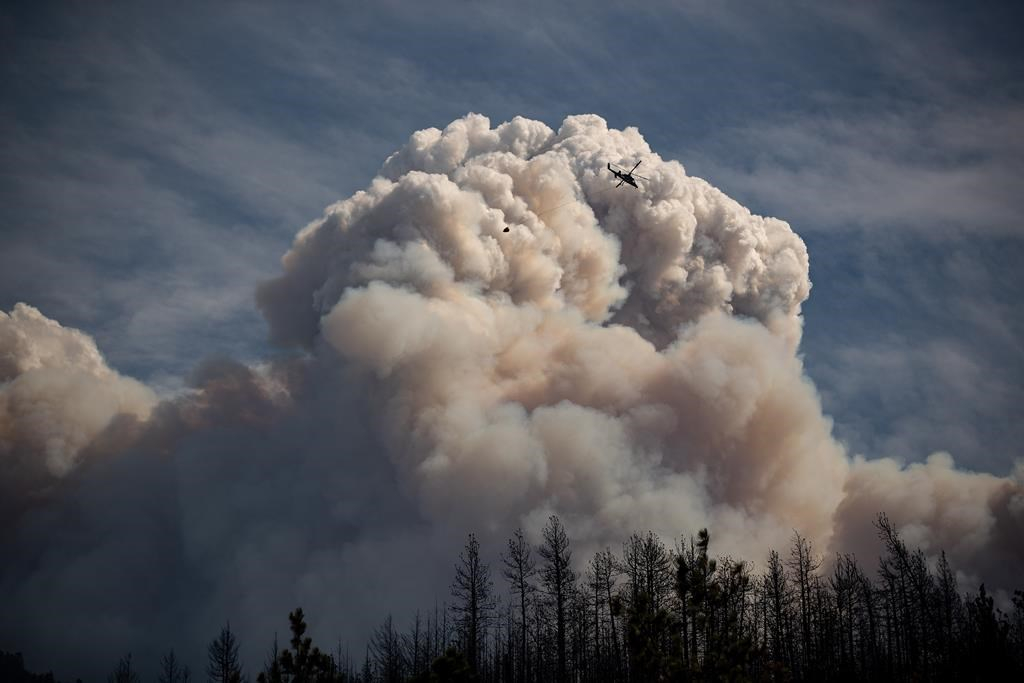 A helicopter carrying a water bucket flies past a pyrocumulus cloud, also known as a fire cloud, produced by the Lytton Creek wildfire burning in the mountains above Lytton, B.C., on Sunday, August 15, 2021. File photo by The Canadian Press/Darryl Dyck
Previous story
Next story

A new report examining the health impacts of climate change says more Canadians than ever are facing serious health risks from heat waves and wildfires, prompting warnings from doctors that we need to do more to adapt to the reality of a warmer planet.

"These are grim warnings that for every day that we delay our response to climate change, the situation gets more critical."

In Canada, the authors note, the heat dome that descended on British Columbia and parts of the Prairies in June and July "would have been almost impossible without human-caused climate change."

That heat wave lasted several weeks and saw the town of Lytton, B.C., destroyed by a fire a day after it recorded a temperature of 49.6 C, the highest temperature ever seen in Canada.

The Lancet study says that heat wave was responsible for at least 570 deaths in Canada, and hundreds more in the United States.

Across Canada, the risk of death from extreme heat for Canada's seniors rose more than 50 per cent in the last four years, compared with the years 2000 to 2004. Exposures to wildfires grew almost 20 per cent in that time, but not uniformly, with Indigenous Peoples at much higher risk.

First Nations people living on a reserve are 33 times more likely to be forced to evacuate due to a forest fire than people living off reserve, the Lancet report said.

The authors also said that in 2020, heat caused the loss of more than 22 million hours of potential labour in Canada, harming human health and productivity at the same time.

Globally, climate change left almost one-fifth of the world's land surface in extreme drought in 2020. Between 1950 and 1999, that value never exceeded 13 per cent. The resulting impact on crops saw a decrease in production of rice, soybeans, wheat and maize of between two and six per cent.

Dr. Courtney Howard, an emergency room physician in Yellowknife and past president of the Canadian Association of Physicians for the Environment, helped write the Canadian briefing note out of the Lancet Countdown's global findings.

She said this year the focus was more heavily on the need for adapting to the fact that climate change isn't just real, it's already hurting us.

"So how are we going to get each other through these heat waves and these wildfire episodes in a way that's as healthy as possible?"

The Canadian briefing note lays out several policy requests, including more green space in urban areas to offset the impact of heat waves, and a national strategy for adaptation to climate change that takes into account the serious harm to human health.

The authors are also highly critical of the federal government for allowing itself to be heavily influenced by lobbying from the oil and gas industry. They said in the first year of the COVID-19 pandemic, fossil fuel industries and associations met with federal officials 1,224 times, an average of 4.5 meetings every day.

"Energy transition policy must be developed without such excessive industry pressure," the report said.