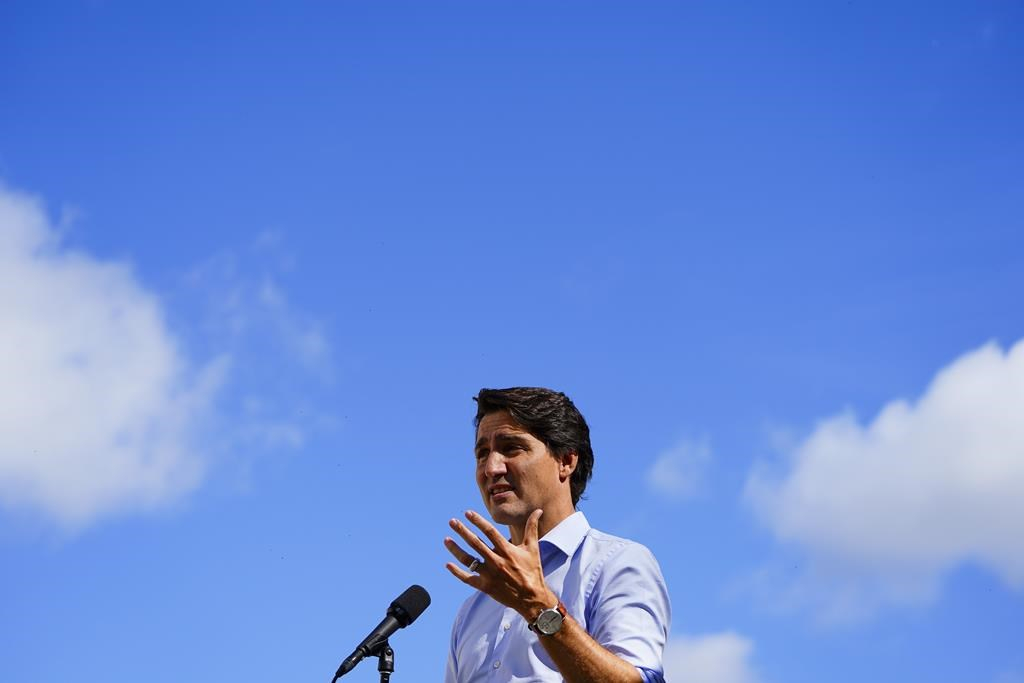 Prime Minister Justin Trudeau speaks to media as he visits a vaccine clinic in Ottawa on Tuesday, Sept. 28, 2021. File photo by The Canadian Press/Sean Kilpatrick
Previous story
Next story

A new analysis suggests the Liberal climate plan could meet Canada's greenhouse gas emissions targets for the first time before the end of this decade.

The study by Clean Prosperity published today could give some heft to Prime Minister Justin Trudeau's credentials as he heads to planned climate discussions at the upcoming G20 summit and United Nations COP 26 meeting.

Trudeau is boarding a plane this morning bound for Europe to attend those summits, though his first stop on the six-day trip is an official visit to the Netherlands.

He plans to address the Dutch parliament Friday, and meet later in the day with Prime Minister Mark Rutte, before heading to Rome for the first in-person gathering of G20 leaders since 2019.

On Nov. 1 and Nov. 2 he will be in Glasgow for the 26th meeting of the UN's climate group, the first time Trudeau will be at a COP meeting since the Paris agreement was signed just weeks after he first became prime minister in 2015.

Leaders' summits are only held at every fifth meeting and the Glasgow negotiations are a year delayed because of COVID-19.

Catherine Abreu, executive director of Destination Zero, said Canada and Trudeau brought a lot to the table in Paris.

"But since then, there's been a growing recognition of the disconnect between the rhetoric that Canada brings to those kinds of conferences and the actual on-the-ground progress," she said.

Canada's emissions have risen more than three per cent since 2016, the most of any G7 nation, five of which saw emissions decline in that period. Abreu said that fact and the purchase of the Trans Mountain pipeline in 2018 did not go unnoticed.

But Trudeau has substantially upped the ante in his climate plan over the last 12 months, including promising to end the sale of gas-powered cars and create an emissions-free power grid, both by 2035, as well as capping emissions from oil and gas and then forcing them downward, no later than 2025.

Clean Prosperity's executive director Michael Bernstein says taken altogether, Liberal climate promises could get up to 41 per cent below 2005 in time to meet the 2030 goal. Canada has not met an emissions goal yet, blowing well past the targets set for both 2012 and 2020.

But Bernstein said Canada has to actually implement its policies without delay.

"Things are going to get real now," he said. "And tough choices are going to need to be made and things like those regulations on oil and gas have to actually go in place and bring down emissions."

Climate is also among the key items on the table at the G20 in Rome, where there will be a push to get 19 of the world's most prosperous nations and the European Union to get tougher on climate action and financing for poor countries.

But it is the other global crisis — COVID-19 — that will loom largest in Rome. At the first leaders' group meeting, global economics and health are on tap, and both are directly tied to the pandemic. What constitutes an equitable recovery and efforts to improve the World Health Organization before the next pandemic are both expected to be topics of discussion.

Canadian officials said prior to the trip that Canada is making vaccine equity one of its priorities for the talks, even though Canada's own record on the matter is not great. After promising over the summer that 40 million doses would be donated to the COVAX global vaccine sharing alliance, Canada has thus far distributed just 2.6 million of them.

But Canada isn't alone. On Monday, officials from the COVAX vaccine-sharing facility reported that of 1.3 billion doses promised from wealthy countries, only 150 million have arrived.

Globally, 38 per cent of the population is fully vaccinated. In Africa, it's not even six per cent.

Ethiopian health minister Lia Tadesse said at a health meeting Monday in Berlin that only 4.2 million vaccine doses have been administered in her country, for 115 million people. Less than one in 100 Ethiopians have received both required doses of vaccine.

It's our job as environmental advocates to turn the eyes of the world to B.C. at COP26

who funds Clean Prosperity which speaks so well of Trudeaus plan? these reports need context of the organization included. I think they are a CPPC front.

Well, this isn't an in-house

After checking out their

After checking out their website, I'm highly suspicious of the purpose/motive behind Clean Prosperity. It seems happy as long as the climate plan does not include reducing oil/gas production.

Am I missing something? Is

Am I missing something? Is it just me or are we (Canadians) being rated by what we PROMISE TO undertake to counter climate change or by what we have ACCOMPLISHED in reaching the promised goals?