By David Tindall | Analysis | November 12th 2021
#89 of 98 articles from the Special Report: COP26: Uniting the World to Tackle Climate Change 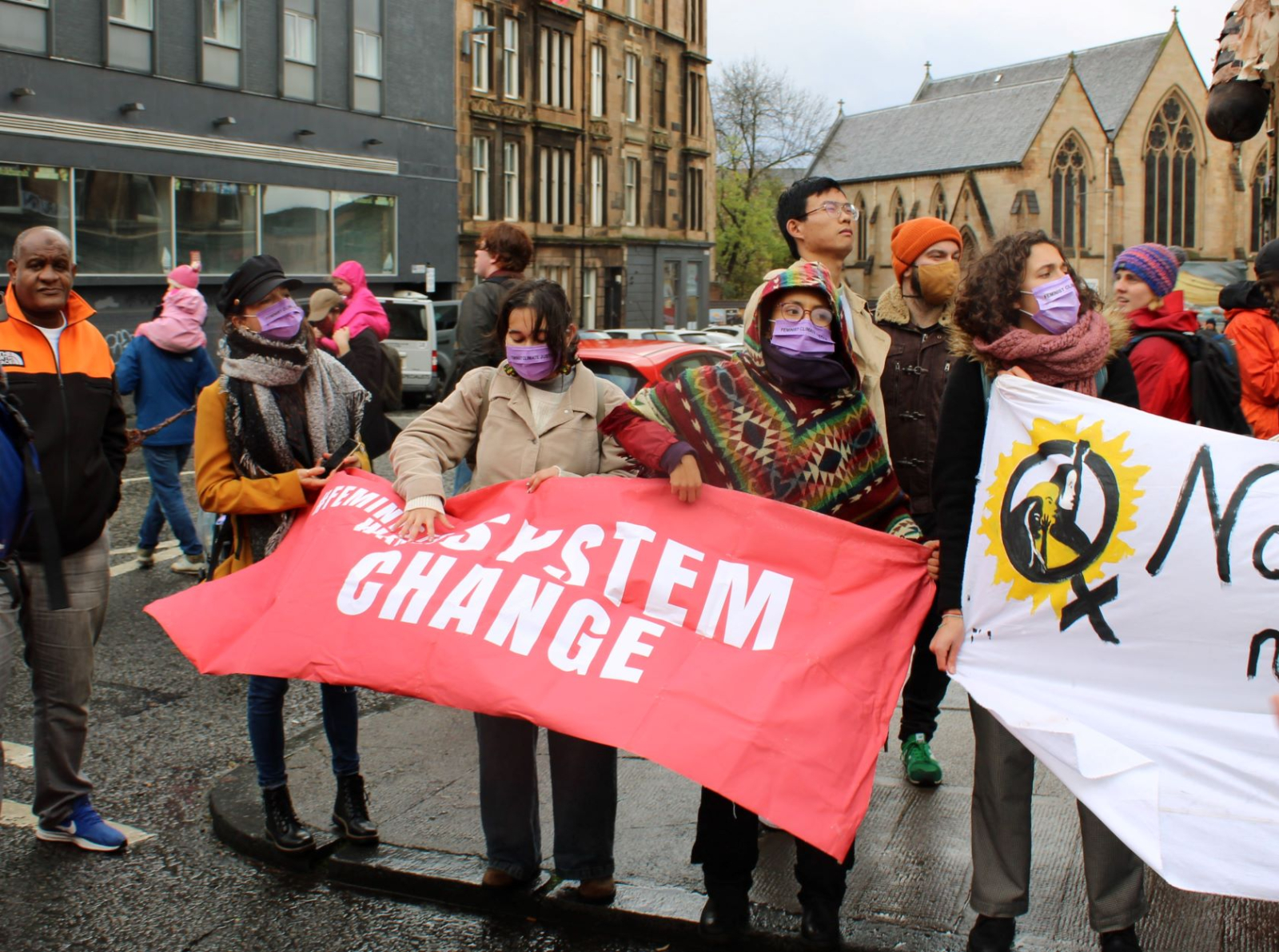 Climate protestors calling for change to the capitalist system at a march in Glasgow on Nov. 5, 2021. Photo by: David Tindall
Previous story

Is the capitalist system the root of the problem or solution to climate change? It depends on who you ask.

Bill Gates, one of the world’s richest billionaires, brushes the topic with his recent book entitled, How to Avoid Climate Disaster. In it he emphasizes investments in new green technology and for the most part eschews politics as the fix. Gates argues there are many things that can be done differently, but unsurprisingly, he is not a critic of capitalism.

A largely contrasting view has been advanced by Naomi Klein in her 2014 book This Changes Everything, and several other works. While Klein does not dismiss the need to employ new green technologies, she strongly critiques contemporary capitalism in its present form which she argues is responsible both for vast social inequality and the climate crisis. Her solutions revolve around socio-political change.

We are now in a climate crisis, as has been declared in a number of political jurisdictions — such as the City of Vancouver — and organizations including the University of British Columbia.

So what is the role of capitalism in addressing the problem? Asking this is relevant because struggles over how to address climate change are based on differing evaluations of capitalism. There are many social justice issues important in this debate, but I will focus mostly on some environmental, and political considerations.

Many of the solutions advanced for tackling climate change are consistent with capitalist approaches. For example, in his remarks last week to the UN climate conference in Glasgow called COP26, Prime Minister Justin Trudeau trumpeted Canada’s national carbon pricing scheme. Carbon pricing leaves it to businesses and individuals to decide whether to reduce emissions, reduce their reliance on fossil fuels, or pay more in taxes or purchase carbon credits. Carbon market development is a core part of COP negotiations, particularly as laid out in Article 6 of the Paris Agreement.

On the other hand, people at protests outside the COP26 venue and activists around the world are calling for the dismantling of capitalism. Slogans on signs read: “Capitalism is killing the planet” and “Climate Struggle is a Class Struggle” and “Fossil Banks. No Thanks.” Similar critiques have been voiced by some civil society groups, and even some government representatives — such as Bolivia’s leader — inside official COP26 meetings.

It is hard to know whether all the protesters and critics believe what they say, or whether the slogans are simply a stance for pressuring governments and corporations to make change. There is evidence not everyone who participated in the Black Lives Matters protests in the U.S. really believed in the slogan “Defund the Police.” Many protesters adopted the catchy phrase as a way to push for police reform. Others of course really did, and really do believe the slogan.

It is also difficult to know precisely which system any given protest is referring to since there are a variety of notions about what capitalism and socialism really mean. Capitalism in particular locations can vary to the extent that it includes free markets, robust social welfare systems, government intervention, and social inequality. This is also true of socialist societies, which have varying levels of public ownership of key industries, and level of democracy. People of a certain age tend to think of the former Soviet bloc countries as exemplars of socialism. For younger people, the current Scandinavian countries may come to mind.

But the real question is how do economic growth and carbon emissions mesh in the real world? Despite claims from green capitalists that these can be decoupled, evidence suggests they are usually positively correlated. For example, the only two times global emissions dropped significantly in recent history were during economic downturns associated with the Great Recession that started in 2007, and the economic fallout of the global COVID-19 pandemic.

Is #capitalism the root of the our #climatecrisis problem or the solution? That's a live issue at #COP26. @dbtindall writes for @natobserver

On this note, examining the Climate Change Performance Index for 2022 (presented at COP26) shows Scandinavian countries such as Denmark, Sweden, Norway (which, incidentally, are the top three ranked countries in the world) have much better climate change performances than more capitalist countries such as the U.S. and Canada, which are near the bottom.

A disproportionate number of climate activists are progressives (though this is a less partisan issue outside the US, and some other English-speaking countries). But as former Greenpeace USA forest campaign director George Marshall has observed, unless some people from all political stripes (e.g. conservatives) join the struggle, it will be hard to right the ship. On this note, in his speech earlier this week in Glasgow, former U.S. president Barack Obama emphasized the need to go beyond preaching to the choir to solve the climate crisis.

Capitalist financial institutions play a central role in current climate change solutions. Therefore, making the abolishment of capitalism a central aspect of the discourse around climate solutions has some limitations. Like the debate over the police, is it a better strategy to talk about abolishing capitalism, or reforming it? Before deciding, it is wise to gauge how each approach resonates with public opinion, and influences broad support for climate action.

I was disappointed by the

I was disappointed by the fairly shallow level of analysis in this article. The fundamental question here is not about capitalism or socialism, per se, but about how to change from the global commitment to economic growth to a no-growth/sustainable economy.
Yes, we do need to deal quickly with the threat of climate change. But as any number of other indicators about the biological health of the planet indicate, the real threat is our belief that we can continue with an economic system of any sort based on the assumption that economic growth (as presently defined with GDP) can go on indefinitely on a finite planet. A warming planet is bad, but a planet in the throes of the 6th great extinction is even worse.

This commitment to infinite growth on a finite planet is embedded in the heart of capitalism. What we need to here about is how we are going to move from the rapaciousness and destruction that this commitment to growth has wreaked to a no-growth economy, where the goal is to provide everyone on the planet with the basics of a decent, healthy life while minimizing the use of energy and materials.