By John Woodside | News | November 11th 2021
#87 of 99 articles from the Special Report: COP26: Uniting the World to Tackle Climate Change 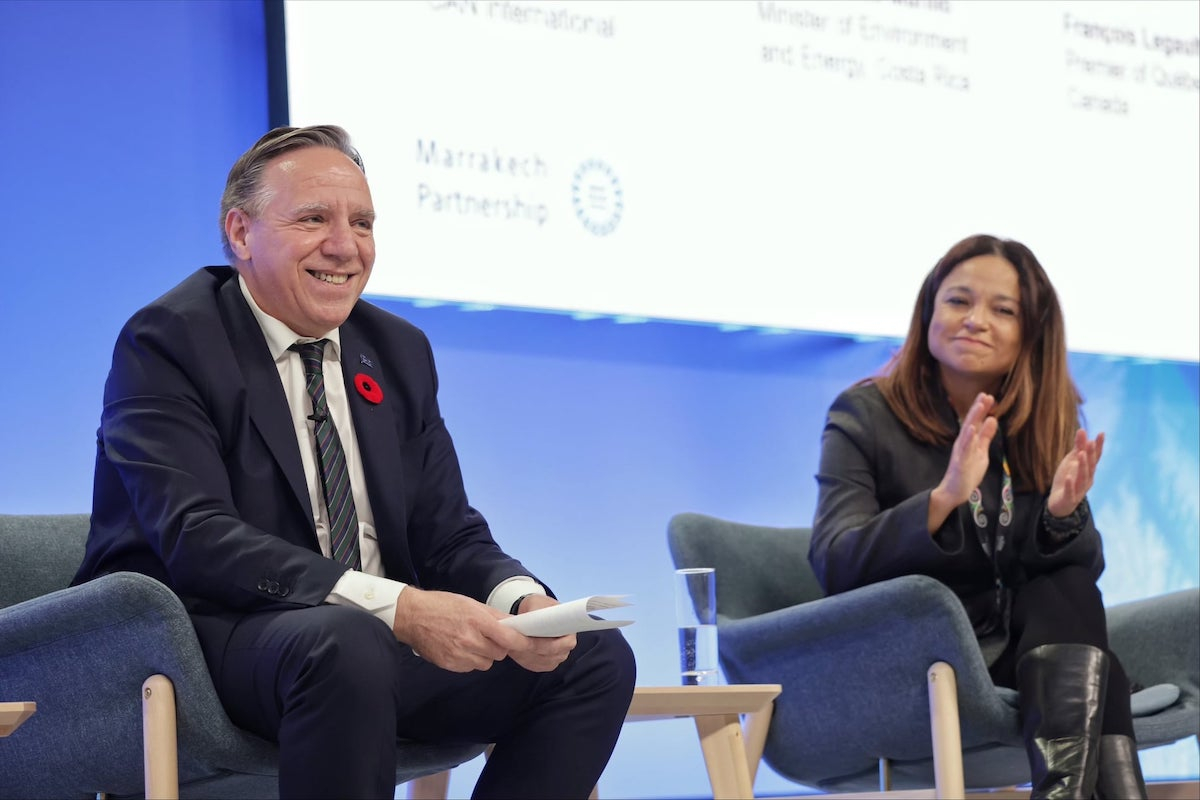 Quebec Premier François Legault at the UN climate change conference in Glasgow, Scotland. Quebec is now a member of the Beyond Oil and Gas Alliance. Photo via François Legault / Facebook
Previous story
Next story

A new diplomatic alliance to phase out global oil and gas production was formally launched at the UN climate change conference in Glasgow on Thursday, signalling an emerging international front in the fight against climate change.

The Beyond Oil and Gas Alliance, which Quebec announced it would join last week, is led by Costa Rica and Denmark, and now also includes France, Greenland, Ireland, Sweden, Wales, and Quebec as “core” members, California, Portugal, and New Zealand as “associate” members, and Italy which joined as a “friend” of the alliance.

Core membership means the country — or province, in the case of Quebec — has committed to end new exploration permits. Associate members must demonstrate efforts towards an oil and gas phase-out, like ending fossil fuel subsidies. The alliance expects to add new members in the coming months, including Scotland, according to news reports, which could upend the United Kingdom’s oil extraction plans, given much of its reserves are in the North Sea.

"There's no future for oil and gas in a 1.5-degree world,” said Denmark's Minister for Climate Dan Jørgensen, at the launch.

While none of the signatories are global oil and gas heavyweights like Canada, Saudi Arabia or Russia, advocates say it’s significant that signatories are committed to leaving untapped fossil fuel reserves in the ground. It signals a growing awareness that limiting fossil fuel production is essential to holding global warming to safer levels, while also recognizing the International Energy Agency’s net-zero report and latest energy forecast that shows demand for oil declining in every scenario it considered.

In an interview, Climate Action Network Canada national policy manager Caroline Brouillette called it significant for countries to speak honestly about what’s required to limit global warming to 1.5 C. The goal of the UN's Paris Agreement is to hold global warming to no more than 2 C, and as close to 1.5 C as possible. In Glasgow, there is more emphasis on aiming for 1.5 C, because of a growing recognition of the severe damage caused by every 10th of a degree increase.

“We're at 1.1 degrees right now and we're already seeing really destructive impacts of climate change, and that has definitely reiterated how 1.5 is really a critical threshold,” Brouillette said.

“What we're hoping is for Quebec to be this first domino,” she said, referring to other jurisdictions in North America that could join.

At the start of the climate summite called COP26, Prime Minister Justin Trudeau reiterated a campaign promise to cap emissions from the oil and gas sector, and ratchet those emissions down over time to help meet targets. In an interview with Canada’s National Observer earlier this week, Environment and Climate Change Minister Steven Guilbeault explained the cap strategy as a bank shot to curb production.

“The federal government doesn't control the production of natural resources, the constitution is very clear on that,” he said. “We can intervene on pollution, but not on production.”

The Beyond Oil and Gas Alliance launched at #COP26 Thursday with 8 "core" members, including Quebec. "There's no future for oil and gas in a 1.5-degree world,” said Danish Climate Minister Dan Jørgensen. #COP26xCNO #BOGA

“We have to put in place measures in Canada that will stand up when challenged in court because we know from past experience it's going to be challenged,” he said.

Brouillette said while it’s true provinces have jurisdiction over natural resource production, Ottawa’s options aren’t as limited as some may think. She pointed to jurisdiction over interprovincial transport “which targets pipelines,” as well as the federal impact assessment act which was used earlier this year to drive a nail into the coffin of thermal coal.

Global policy campaign manager at Oil Change International, Romain Ioualalen, called the launch of the alliance a “turning point” in climate negotiations, and called for countries to take further action.

“If this alliance can convince more countries and regions to join, isolates laggards, and pushes its members towards more ambition, then it will be a success.

“The creation of this alliance puts to shame claims of climate leadership among countries like the United Kingdom, Norway, the United States and Canada, all of which have yet to answer this simple question: Where is your plan to stop producing the fossil fuels that are driving the climate crisis?”

Bravo, Monsieur Legault!
During the 2018 election campaign, Mr Legault's platform was very weak on the environment. But he «read» the mood of the electorate and is moving in the right direction.
This move indicates that small countries such as Denmark, Costa Rica, Wales, Québec, etc. can show the way to larger producers of fossil fuels. At COP 26, this Alliance says to those large producers «Shame on you!»

Countries? Wales? Really?
Now the coal mines that fuelled the industrial revolution are tapped out and shuttered, and the CO2 is in the air essentially for ever, Wales gets self righteous about oil and gas exploration. It's easy to brag about 'how green are my valleys [now]" when you no longer have skin in the game.

Wales no longer has "skin in

Wales no longer has "skin in the game" because Britain responded to climate change relatively early and has already experienced the consequences of an energy transition. It was no easier for them to phase out coal than it will be for other producers now. The reality is that fossil fuels use must be urgently phased out to prevent ongoing climate change and its harmful effect to life on earth. It's time to put production limits on fossil fuels and transition to new non-carbon energy sources. Hopefully when Alberta and other current producers finally transition they will encourage others despite having no skin in the game.