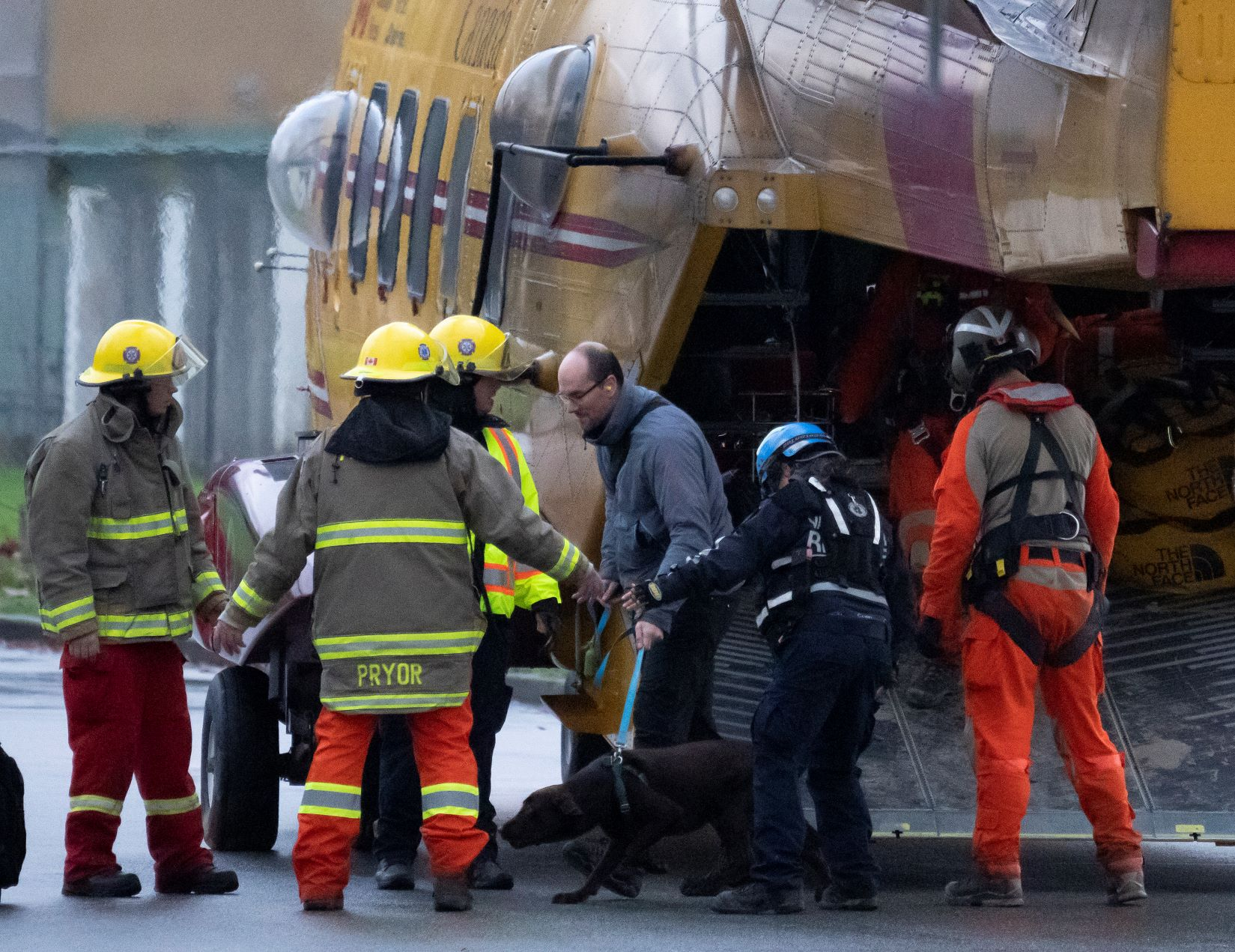 AGASSIZ, B.C. — Melanie Forsythe's drive home from Vancouver to Hope, B.C., had her making at least five detours as torrential rain washed out a bridge, closed roads and trapped her overnight between two mudslides before a helicopter landed on a highway and whisked her to safety.

Forsythe, who was with her boyfriend Shawn Ramsay and a friend, finally made it to a reception centre in Agassiz on Monday, about 18 hours after they were forced to stop on Highway 7 near Agassiz with nearly 300 other travellers.

"All three of us were kind of hyping each other up, saying it's going to be good, we're going to get out of here. But then we all had moments like, 'Is this it? Is this the last time we're going to see our kids?' We were talking to our parents and our families, but it was just a scary situation."

Forsythe, 47, said her children are in their early 20s, but she was worried about a nurse alone in her vehicle without her toddler, who was at home in Hope.

Watching people stuck on the highway overnight helping each other out by offering diapers or sharing any food they happened to have nearly brought her to tears, Forsythe said.

She and everyone in her vehicle were with about two dozen people, including the toddler's mother, who were airlifted together to a reception centre where nearly 80 others from the highway had already arrived.

Twelve people had been rescued from Highway 7 by the local fire department on Sunday evening before the Vancouver Heavy Urban Search and Rescue Team was called in on Monday.

Jonathan Gormick, information officer with the rescue team, said about 275 people were stuck between the two slides, including 50 children and 20 dogs. All were rescued and taken to the evacuation centre before 6 p.m.

On Tuesday, crew members are tasked with searching for people who may have been trapped in debris from the slides. There were no reports of any fatalities on Monday.

Jashanpreet Singh and his wife, Harleen Kaur, were also caught between the two slides Sunday and came upon a vehicle that had been partially crushed by a slide.

""All three of us were kind of hyping each other up, saying it's going to be good, we're going to get out of here," Melanie Forsyth who was rescued by helicopter in B.C. storm. #BCStorm

A nine-year-old boy had been injured and had blood coming out of his nose and ears, Kaur said.

Firefighters who were first to the scene on Sunday were able to take the boy to care, she said.

Both were helicoptered out on Monday. Singh said they learned a valuable lesson because they had no food or water with them.

The mudslides rolled over the highway during an "atmospheric river" that brought a deluge of rain and flooding to the southwest and central parts of the province and forced an evacuation order in the Interior town of Merritt on Monday.

Merritt issued an evacuation order for its population of about 7,000, saying residents could not use water from faucets or flush toilets.

“The floodwaters have now inundated two bridges across the Coldwater River, and floodwaters prevent access to the third," the city said in a release.

Prime Minister Justin Trudeau said in a statement posted on Twitter that the federal government is ready to help British Columbians affected by flooding and extreme weather.

"To the people of Merritt, and to all British Columbians affected by the flooding: please stay safe," he said.

"A slide near Lillooet led to nearly 50 vehicles being stuck," he said. "Ministry crews and the Pemberton search and rescue team have rescued those on-site and they are being housed in Pemberton. Over 20 emergency centres have been activated," he said of help being offered in the affected areas.

"People in Merritt, Princeton and areas along Highway 7 and 99 and the Coquihalla (Highway) are seeing the worst of it," he said.

Multiple roadways have been closed because of flooding or landslides, including sections of Highway 1A, Highway 3, Highway 11, Highway 12, and Highway 91.

Paula Cousins, the Ministry of Transportation's representative for the Interior region, said the Highway 5 corridor between Hope and Merritt was closed Monday due to slides and falling rocks after 230 millimetres of rain fell since Saturday evening.

Heavy rain gave way later Monday to wind storms that could uproot trees and cause more power outages in some areas after 16,000 customers lost electricity on Sunday.

Armel Castellan, a meteorologist with Environment and Climate Change Canada, said Monday wind gusts up to 90 kilometres an hour were expected for Victoria and much of the south coast and into the Interior.

"Definitely the atmospheric river will end today as it moves south, deeper into Washington state. That said, as that clearing happens, it's going to be coming with a big shot of wind," he said.

Historic conditions meant some areas saw an average amount of rain for November in under 48 hours, Castellan said, adding rain will shift to snow for places like the Coquihalla summit and 20 centimetres could fall.

A local state of emergency has been declared in part of British Columbia's eastern Fraser Valley where unrelenting rainfall caused flooding, mud and rock slides and the closure of highways to and from the southern Interior.

James Reinheller's family home in Abbotsford is scheduled to be featured in House and Home magazine's Christmas issue, but it was one of the first to be hit by a strong wave of water on Sunday as creeks overflowed in the neighbourhood.

Damage to some homes across the street was so severe they looked like they'd been hit by a vehicle, not water, he said.

Flood warnings and watches were issued on rivers and streams for areas from Merritt south to the United States border, the lower Fraser region and sections of southern Vancouver Island.

This report by The Canadian Press was first published Nov. 15, 2021.