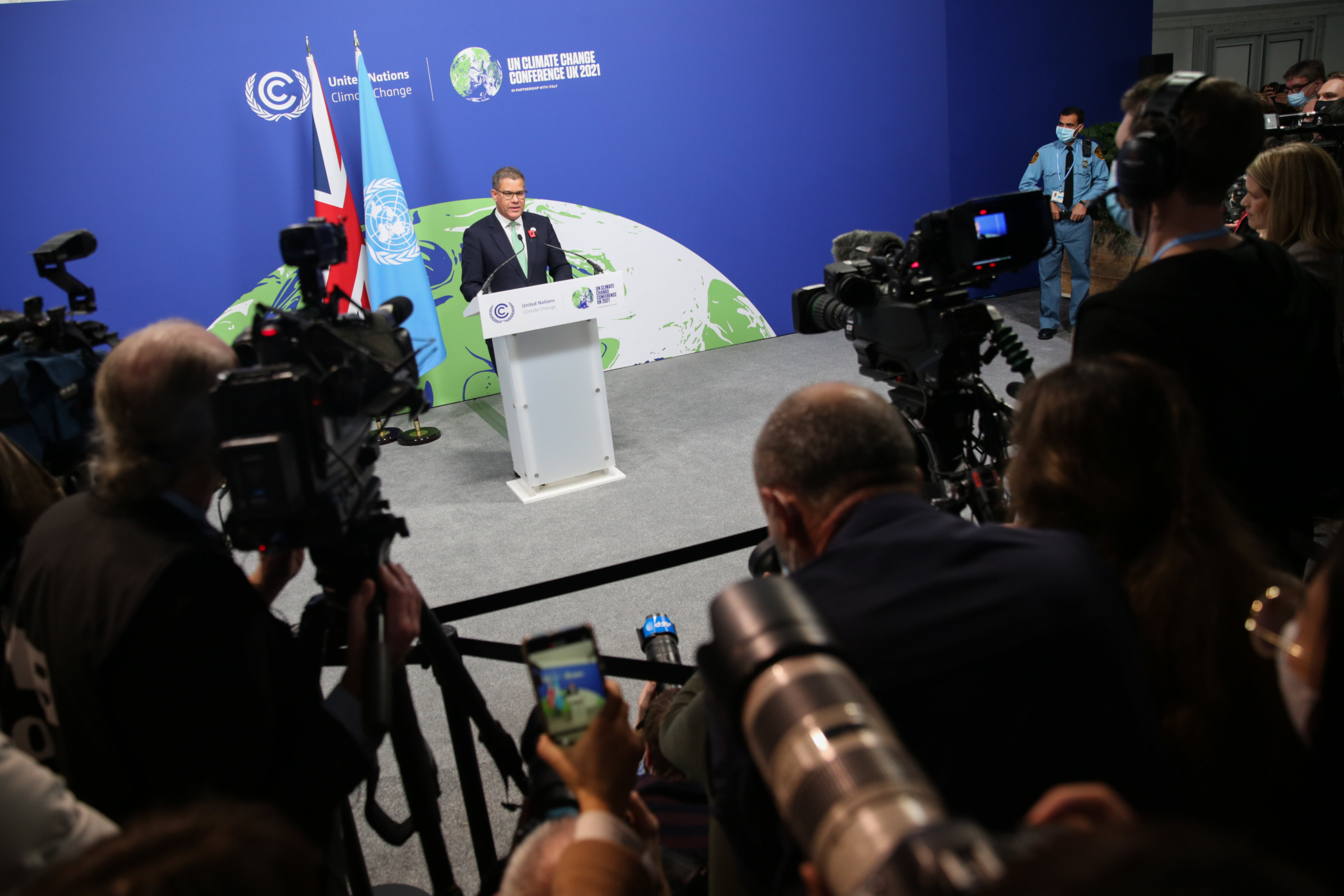 COP26 president Alok Sharma speaks to reporters at the end of the UN climate conference in Glasgow. Photo via UNFCC (CC BY-NC-SA 2.0)
Previous story
Next story

The agreement to come out of COP26 is leaving many disappointed for not securing a climate-safe future, but some progress was made that advocates say shouldn’t be ignored.

The decision to come out of COP26, called the Glasgow Climate Pact, did not align the planet with the Paris Agreement goal of as close to 1.5 C as possible. In fact, an analysis by Climate Action Tracker released during the conference projected at least a devastating 2.4 C increase based on countries' latest targets, called nationally determined contributions (NDCs).

“In 2019 when it was COP25 in Madrid, the projection we had from all the NDCs that were communicated at that time was that we were on the road to have 3.2 C of temperature rise, and now we're on the road to 2.4 C,” said Géraud de Lassus Saint-Geniès, an assistant professor at the University of Laval researching climate law and governance.

“We're seeing that the Paris Agreement works. I think that's overall good news,” he said, noting it still hasn’t worked well enough to close the gap between countries’ ambitions and the actual goal of holding warming to as close to 1.5 C as possible.

De Lassus Saint-Geniès also said it was a “considerable step forward” for the agreement to call for the phase-down of coal and the phase-out of inefficient fossil fuel subsidies, specifically because despite the role of fossil fuels driving climate change, the very mention of fossil fuels has been excluded from any previous COP decision.

The language around fossil fuels was considerably weakened throughout the conference as draft texts emerged. An early draft called on countries to “accelerate the phasing-out of coal and subsidies for fossil fuels,” but the final agreement instead calls for a phase-down of unabated coal, and a phase-out of inefficient fossil fuel subsidies.

International Institute for Sustainable Development policy adviser Vanessa Corkal says those qualifying words create room for multiple interpretations that can delay climate action. Without a clear standard definition of what an “inefficient” fossil fuel subsidy is, countries can bend the rules to their benefit.

“Whether they say ‘phase down’ or ‘phase out,’ we need to continue that rapid reduction in emissions, and no country can hide from that," says @GreenShaneM on the Glasgow Climate Pact. #COP26 #cdnpoli

Corkal said a successful COP would have identified the importance of phasing out coal, oil, and natural gas, and would be aligned to a 1.5 C world.

“I don't think this COP decision gets us there,” she said, adding there was still some progress made.

“That reference to coal and, of course, the reference to fossil fuel subsidies are important precedents that I think civil society and countries can build on in future negotiations, (but) do I think it goes far enough? Probably not.”

Greenpeace Canada’s Shane Moffatt says that while commitments matter, the semantics of “phase out” versus “phase down” can distract from what the actual target is.

“We need to get on with fundamentally reducing our emissions to levels that are going to keep us to 1.5 C, so I think that's the prize I'd like to keep my eye on versus some of the typical shenanigans that reflect the usual lobbying at the end of COP,” he said.

“Whether they say ‘phase down’ or ‘phase out’, we need to continue that rapid reduction in emissions, and no country can hide from that.”

For Canada, the decision to come out of Glasgow doesn’t have many tangible impacts. The country has already made pledges around phasing out “inefficient” fossil fuel subsidies by 2023, referring to subsidies that incentivize new exploration, and has promised to phase out “traditional” coal-fired electricity by 2030. Many of the key pledges Canada signed onto in Glasgow, like phasing out international fossil fuel subsidies or halting deforestation, are not included in the final text.

“Canada needs to demonstrate how serious it is about climate ambition by committing to robust policies to allow them to meet those pledges,” Corkal said.

De Lassus Saint-Geniès said the decision to come out of COP26 could help the Liberal government implement its domestic agenda.

The Glasgow climate pact “gives legitimacy to the platform of the current government,” he said because the Liberals can point to what’s come out of COP26 to show how domestic policies pitched during the last election align with what the world is agreeing to.

“I think it will help the Liberals move forward with their agenda saying, ‘Look, here is what we want to do at the domestic level, and by the way, look at what states have promised to do at the international level. We are not moving alone,’” he said.

In Glasgow, the failure of rich countries to deliver on the promise of US$100 billion annually by 2020 held negotiations back. The promise was critical to getting countries around the world to sign onto the Paris Agreement, and many countries see the climate funding as a precondition to increasing greenhouse gas reduction targets.

“It was very disappointing to see wealthy countries like Canada not deliver on that $100 billion, and there's just no way we're going to see effective and equitable global action on climate change without that funding,” said Moffatt.

Corkal explained there is a connection between not delivering on the climate finance pledge and the weakened language on fossil fuels.

“There's an important dynamic regarding where different countries are at in terms of their individual economic pathways, and there are countries, including India, that are still quite reliant on coal, and that transition is difficult,” she said.

Because of its reliance on coal, India caught “a lot of flak” for pushing for softer language on its phase-out, Corkal explained.

“But I think the bigger picture on coal is that there is this dynamic of developed countries needing to move faster and needing to step up their ambition because of their historic responsibility for climate change emissions,” she said.

At COP26, India’s position was that rich countries should mobilize $1 trillion in climate finance by the end of the decade to aid a transition to a clean economy, reports Bloomberg.

It's sinking in to me, that

It's sinking in to me, that the NO sent a bunch of staff to COP26, not just one or two. The ones who came from here in Vancouver must have expended 2 full tonnes of CO2 per person to fly round-trip to Scotland.

How many? From where? How about an accounting of how much carbon dioxide was emitted so NO could field a whole team at COP26? How is that justified?

How about an article justifying it, comparing it to hiring UK stringers to attend by train and file for NO?

Julian just tossed off, remarking on how casual it had become, that he goes to COP every year, which costs real money, and real carbon emissions, because it's the best place to lobby world leaders. But, honestly, how effective is that? Does it really pay for all those emissions, and more importantly, the terrible example that they set?

An NO podcast just put less-travel right off the table, as unfair to the diasporas from Asia and Africa that want to visit home. When the recent immigrants with family in the old country were European, I assure you that none of my grandparents from Scotland, ever saw their families again, and there were no phone calls then, either. It's something human beings can do, and if you can't even contemplate that sacrifice, you don't REALLY believe it's an actual "emergency".

Linda Solomon Wood | Mon, 12/06/2021 - 13:59
Hello Roy, I deliberated long and hard about my decision to take the team to COP. I can't say that this wasn't a decision without an upside and a downside and you very accurately point out the downside. But I still believe it was the right decision. Our job as journalists is to be where stories are breaking and to absorb information so that we can provide it to our readers. Being at COP was an investment in the collective expertise of our team, and meeting people in person expanded what we can do as journalists, what we know about and who our sources are now. I hope that over the next year, the upside will be reflected on a daily basis in what you read on these pages. Thanks for bringing it up and, above all else, for subscribing.