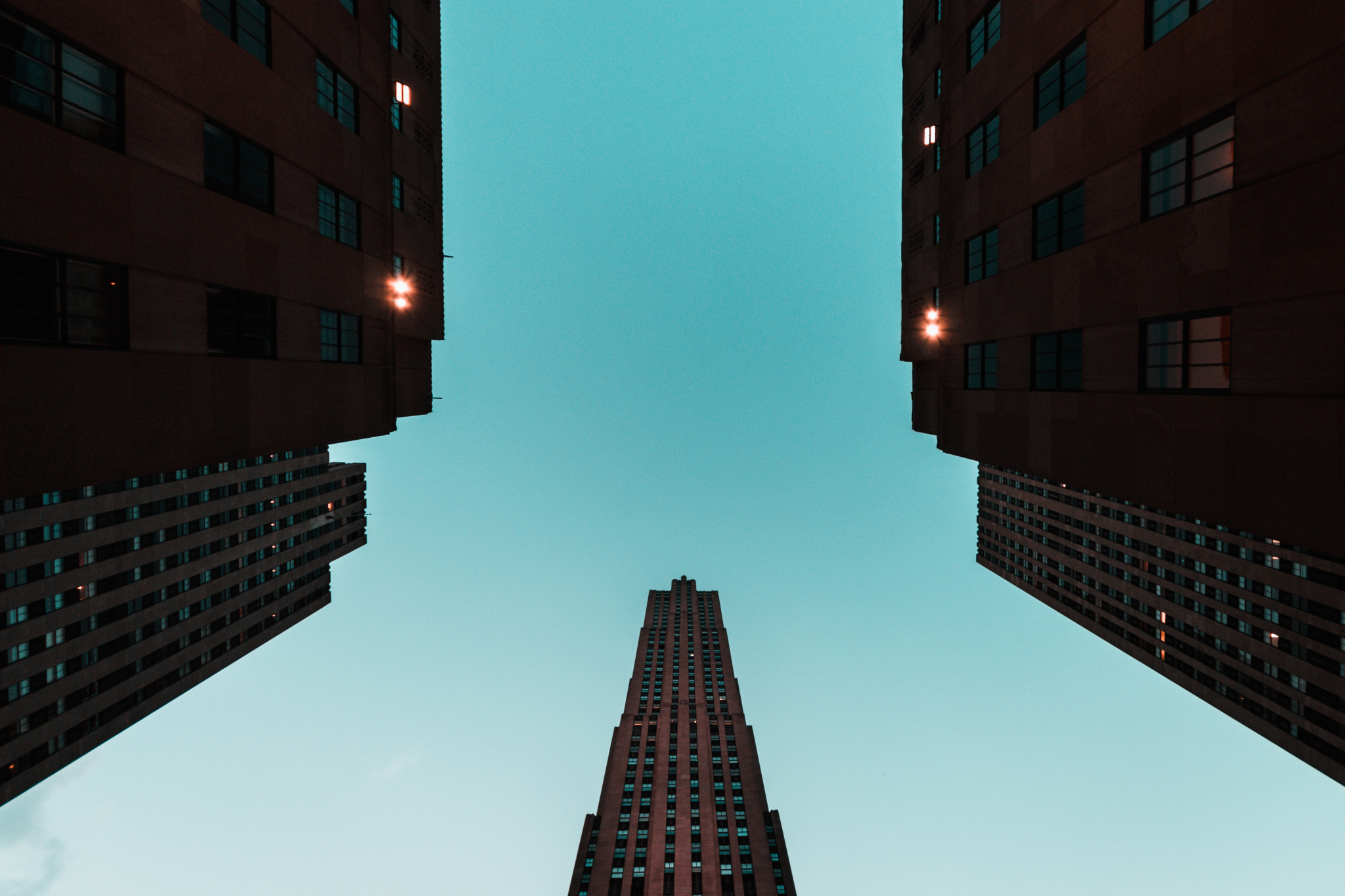 Although some experts have long called for higher buildings to accommodate for population growth in Canadian cities, towering apartment and office buildings aren’t the only solutions to increasing density, according to a recent study. Building their counterparts — mid- and low-rise buildings — can help a city grow, while keeping a significant amount of carbon out of the atmosphere.

The taller the building, the more carbon it emits at every stage of its life. A July study from npj Urban Sustainability found a 140 per cent increase in emissions from a neighbourhood full of skyscrapers compared to an area of low- and mid-rise buildings. The authors found increasing the number of medium-sized buildings could accommodate growing populations more sustainably than cities focused on single-family homes and skyscrapers because they emit less carbon.

Tall buildings have high emissions once they’re built due to complex heating and cooling systems and other operations. But they also impact the environment before their lights are even turned on.

A new study out of Halifax examined the carbon output of two developments that propose knocking down more than a dozen low-rises near the downtown core and replacing them with four highrise towers. Buildings For the Climate Crisis — A Halifax Case Study, authored by environmental scientist Peggy Cameron, found a significant amount of "embodied carbon" would arise from building the towers using cement and steel. She found renovating most of the existing low-rise buildings and constructing a nine-storey infill project would emit 40 per cent less carbon than the proposed new builds, while still increasing density.

Embodied carbon, Cameron explains, makes up all emissions produced during a structure's building phase — from the manufacturing of materials such as windows and doors to the transport of those materials, and then the energy consumed during construction. Carbon released during demolition is also taken into account.

Tom-Pierre Frappé-Sénéclauze, director of buildings and urban solutions at the Pembina Institute, agrees — accounting for embodied carbon is essential.

Steel and concrete are typically used to frame tall buildings, which are high-emission materials, whereas wood, which can sequester carbon, can be used for low- and mid-rise structures, he explained. Although there are some low-carbon concrete options, they’re not normally used.

“Typically, higher-storied buildings are going to be built with concrete and steel,” he said.

“... In most common construction practices, if they're not forced or encouraged to reduce the carbon emissions from concrete and the steel, they will use the cheap stuff. And it’s not always a question of price, it’s also what engineers are used to.”

Towering apartment and office buildings aren’t the only solutions to increasing density. Building their counterparts — mid- and low-rise buildings — can help a city grow and keep a significant amount of carbon out of the atmosphere. #Emissions

That number is important, said Cameron, who explained most green building conversation is around operational carbon — emissions released once a building is finished. She sees a disconnect between the drive to increase density in Halifax and the need to build highrises. Cities like Paris maintain high-density with a low-rise environment, and she wonders why Canadian cities can’t do the same.

So, although the federal government is working to reduce emissions from operational carbon through net-zero building codes and retrofits, Cameron said a significant amount of emissions is being ignored. Leaving embodied carbon out of the calculation makes it much easier to justify tall buildings — green or not — she said.

“If we're not looking at the embodied carbon in the products that we're using, we're actually causing more harm than if we just sat around and turned the heat up in our leaky, old homes,” she said.

“A lot of people have this misperception that when we're building green buildings — and there are so many different standards that are certified out there — that we're doing the right thing for the environment. But, in fact, it's not the case.”

Cameron’s study looked at two high-rise development proposals next door to each other. She found they would release 31,000 tonnes of carbon dioxide equivalents (CO2e), or the emissions from 9,497 passenger vehicles, into the atmosphere throughout the demolition and construction process.

“That means by maintaining the existing buildings, where possible, and building mid-rise instead of highrise, the embodied carbon of the block redevelopment can reduce by more than 40 per cent (13,000 tonnes of CO2e),” reads the report.

“This amount of carbon emissions is equivalent to about 17 years of operational carbon from the existing buildings.”

Also important is changing zoning regulations to not allow for tall buildings that can’t be carbon-neutral or carbon-negative. Infill options show a realistic alternative that could see a lot less carbon enter the atmosphere, she said.

Cameron points to the Royal Institute of British Architects calling for a stop to all demolition and the City of London rejecting a project because of its estimated embodied carbon as positive moves towards recognizing how intertwined building processes and climate change are.

“I think that we have to imagine how we're going to regulate both embodied and operational carbon emissions in the construction and building industry, and then have legally binding targets, and they need to be year by year,” she said.

“And they have to start immediately.”

I'm no fan of highrises, or

I'm no fan of highrises, or of any kind of buildings being packed tight against one another, joined by slabs of concrete and/or asphalt.
It's not at all clear from the article whether a high-rise construction and the low-rise constructions to which its embodied carbon emissions are compared would house identical numbers of people. If not, the comparison's faulty at best.
Toronto's downtown has carried the "increasing density" proposition to an obscene extreme. Wherever one goes, the only thing one can see is high-rise walls, and down the streets themselves. People live in buildings where their "view" is the curtained window of another building's resident. That's no way at all for people to live.
No amount of indoor "facilities" makes up for not getting actual sunlight and fresh air.
No amount of "more housing available" makes up for effective destruction of historical sites. When I came to Toronto, from the fort at Fort York was a clear view of the waterfront: making explicit how the landforms related to the fort's purposes. Now? Just towers. No waterfront to be seen from anywhere ... and hardly, if at all, from any location downtown.
We can't seem to produce enough "clean" water for the city, without having it come out of the tap smelling like soiled kitchen cloths just soaked in bleach solution. Toxic secondary breakdown products of the "cleaning" chemicals aren't measured.
We can't seem to deal with the amount of residential sewage we have now ... but never mind: just go ahead and double the population whose waste feeds into single collection systems. Brilliant planning, say wot?

Looking north, once past the schoolground, there's nary a geographical or botanical feature within view: just many apartment blocks with just enough ground space left for cars to drive up to the front, and back to the street. Some don't have that, even. The schoolground doubles as park space ... and dog-training space as well as puppy-pooper space: despite the notices on the fence saying "NO DOGS."

Because all those people in apartments also want to own dogs ... and there's no place for them to "go."

The issues with dense tower construction are legion. They mess up radio reception, produce humungous amounts of clothes dryer exhaust, and leave no place for children to play, let alone a safe place to play without second-by-second supervision.

I actually question the wisdom of increasing sizes of cities. Where is it written that because the only name of a city in Canada someone knows, means that is the place they must wind up immigrating to. Here's a novel idea: fix the income-balance of the city, get rid of investor-landlords, cap the profits to be taken from new residential construction, and build social housing units that must be rent-geared-to-income units in perpetuity. No condo conversions. That's what happened to the rental stock back in the day.

I find much of the story of what's happened to lead up to how things are as they are now is conveniently neglected, or re-shaped, to fit the prevailing philosophy of the day. Don't get me going on people who plan according to theory, as opposed to what happens for real people, in real time. The planners don't live in tightly packed high-rise complexes, as they prescribe them for other people.

The previous comment makes good points about the comparability of these results, plus the liveability of high rises vs. low rises; so far so good.
The study ignores changing standards for construction for both smaller buildings and high-rises. For example: "Vancouver makes a bold bet on passive house technology with two high-rise projects" https://www.theglobeandmail.com/real-estate/vancouver/article-vancouver-... Passive houses are energy efficient; buildings that with in-situ solar, wind or geothermal power can be net-zero buildings. Build the high-rise out of timber and this equation will shift considerably towards sustainability and carbon neutrality.
Perhaps with energy and CO2 issues neutralized, we can focus on the better living arguments in favour of low and mid rise housing density.

Important article. And there

Important article. And there is another issue to consider, the embodied carbon of parking. A typical underground parking spot costs over $50,000.00 to build, and involves a lot of carbon intensive concrete, steel and excavation work. Less parking reduces the carbon footprint of buildings and our transportation system.