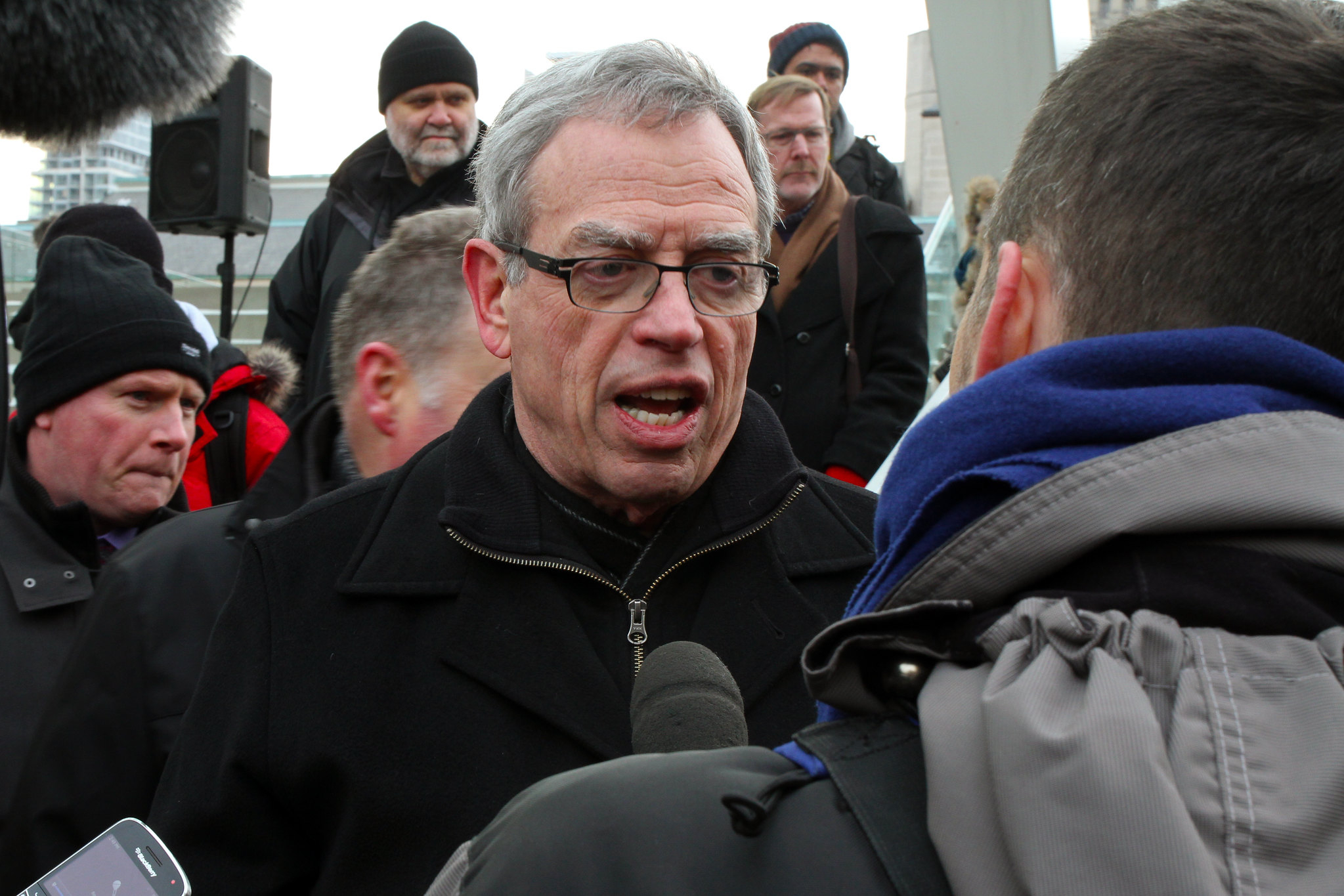 When it comes to Joe Oliver’s recent column on the “green pain” that’s apparently being inflicted by the Trudeau government, the timing is about as bad as it gets, says columnist Max Fawcett. Photo by Alex Guibord / Flickr (CC BY-ND 2.0)
Previous story

In punditry, as in politics, timing is everything. And when it comes to Joe Oliver’s recent column on the “green pain” that’s apparently being inflicted by the Trudeau government, the timing is about as bad as it gets. After all, just as the former Harper-era natural resources and finance minister was waxing poetic about “costly virtue-signalling and moral gestures,” the Lower Mainland of British Columbia was getting shellacked by a storm that will almost certainly end up being the most expensive natural disaster in Canadian history.

As University of Calgary economist Trevor Tombe noted on Twitter, approximately $2 billion to $2.5 billion is traded between B.C. and the rest of Canada per week by road or rail, and that doesn’t include the direct damages associated with all of the bridges and roads that have been washed out by torrential rains and the flooding that ensued. “This is massive,” he said.

These aren’t theoretical damages to future generations or people living in other parts of the world. They’re real costs that will be borne right here today, including by businesses and industry. And make no mistake: they’re a direct and irrefutable consequence of climate change.

“These are exactly the kinds of greater challenges a warmer climate that is sometimes drier, sometimes wetter, will bring,” Glenn McGillivray, managing director of the Institute for Catastrophic Loss Reduction and adjunct professor of disaster and emergency management at York University, wrote in a piece for the Globe and Mail. “Just about 130 days after obliterating heat records by close to 5 C (almost unheard of, as new records usually outpace old by just tenths of a degree), large portions of the same areas are now underwater.”

The sixth assessment report from the Intergovernmental Panel on Climate Change, released in August, even identified so-called “atmospheric rivers” like the one that hit the B.C. coast as a growing threat in a warming world. “The average and maximum rain rates associated with tropical and extratropical cyclones, atmospheric rivers and severe convective storms will therefore also increase with future warming,” it said.

Conservatives like Oliver will surely say it’s not the time to politicize a tragedy or seek to assign blame, and that we need to focus far more on how we adapt and rebuild. Adaptation is important. But so, too, is a full reckoning with the attitudes that have forced us to take these steps, and the enormous financial costs they’ll impose on current and future generations.

It’s no wonder the people who have spent the last decade either denying the reality of climate change or insisting Canada can’t do anything about it are shying away from an accounting of their behaviour here.

One wonders, for example, what the people whose farmland is now underwater think of Oliver’s 2019 column in which he predicted that climate change would actually be good for Canada — especially its agriculture industry. “With improvements in farm technology, drought-resistant crops and new harvesting methods, Canada would have a wonderful opportunity to help feed a hungry world... Paradoxically, Canada is imposing burdensome costs and regulations to try to prevent what for us would be beneficial warming.”

Oliver closed that column with an entirely unironic suggestion that “Canada badly needs competent leadership rather than dead-end ideological obsessions,” which is about as good a prescription for his own party’s future as any that’s been offered up to date.

Dan Albas, the Conservative Party of Canada’s shadow minister of environment and climate change, isn’t quite as aggressively backwards on this issue as Oliver. During an appearance on Power & Politics, he acknowledged that “climate change is real,” a statement that should be about as newsworthy in 2021 as recognizing that gravity does, in fact, exist.

Opinion: If we’re going to ask future generations to carry this weight on our behalf, they deserve to know who put it on their shoulders in the first place, writes columnist @maxfawcett. #CPC #cdnpoli #BCStorms

But his own party voted against acknowledging the reality of climate change earlier this year, and Albas voted against a similar motion put forward by then-environment minister Catherine McKenna in 2019. As the official (and only) CPC delegate at COP26, meanwhile, he seemed to be far more interested in speaking out on behalf of the oil and gas industry’s ability to continue producing ever-larger volumes of fossil fuels than protecting the climate their products are helping to change.

Albas, then, is somewhere in the third stage of climate change grief: bargaining. That’s an improvement on fossils like Oliver, who are proudly stuck in the denial and anger stages, but it’s still a long way from where the rest of the population is today. Most Canadians are rooted firmly in the depression stage, while some have already progressed to acceptance — of our inability to reach our climate targets, yes, but also the cost that will be imposed on future generations.

For a political party that talks incessantly about the intergenerational injustice associated with deficit spending and government debt, Conservatives are oddly quiet when it comes to the environmental debts we’re racking up on behalf of their children and grandchildren.

That hypocrisy needs to be called out, now more than ever. No, it won’t repair the damage in British Columbia or prevent the other climate change-driven disasters that are sure to come. But if we’re going to ask future generations to carry this weight on our behalf, they deserve to know who put it on their shoulders in the first place.

Joe Oliver's columns are bad enough, displaying complete ignorance of science and economics, but the fact that the Ford government appointed him Chair of the Board of Directors of the IESO (Independent Electricity System Operator), which plans future expansions of electrical generating capacity in Ontario, is even worse. It is small wonder that the IESO 2020 Annual Plan shows all expansions to 2040 being satisfied by fossil gas power plants, with not 1W more coming from renewables!

One sort of oddball thing

One sort of oddball thing that comes to me after reading these comments is the 2-2.5 billion dollar observation. If true it does indicate the need for a little more appreciation of La-La Land than has been witnessed up to the present.

Indeed. Particularly because fiscal competence inexplicably and stubbornly remains attached to conservatives as their wheelhouse, their pillar, despite all evidence to the contrary. Destroying that would expose once and for all that they've got nothing to offer in governance. Quite the contrary in fact; they present a clear threat.
What they're doing now in the face of reality is just a new form of denialism and rationalization. Max is right about the climate grief analogy; it's become interchangeable with the ongoing pandemic.
Did everyone read Chris Hatch's last piece which includes a movie trailer coming Christmas Eve with Leonardo DiCaprio and Jennifer Lawrence where they confront the striking inability of people to accept the reality of climate change. What was interesting to me was that Jennifer Lawrence's character is dismissed out of hand as simply being "the yelling lady" when she does indeed yell what is the TRUTH. The acceptable narrative style that predominates in our culture is the "low-drama" one, the cool and in control one of power brokers, but even that is starting to show its age and relevance now.

It's not that Conservatives

It's not that Conservatives are particularly good at managing money, it's just that they're singularly obsessed with the game of accumulating it. And to the degree that individual or collective narcissism is an issue, insist on projecting that obsession onto the rest of us.

To borrow and twist a bit an analogy from Douglas Coupland, since the 80's on the Neo-liberal side it's largely been about pulling the plug and then slicing the pie - pulling the plug on governance to create opportunities to exploit the commons for short term private gain.

Polluting and pandemic, and belief one could argue, intersect at cognitive dissonance.

Couldn't we have a stage for

Couldn't we have a stage for bloody well doing something?

Exactly. Thank you.
What's needed is not giving up.
Sometimes what can be done isn't enough to get to the immediate goal. But neither nature nor life moves in straight lines, or at a regular, smooth pace.
An observation, as well: while depression feels like depression, sometimes it's situational, even when the situation lasts a long time. What moves that along is action, not acceptance.
I find the death/impending death analogy not at all helpful. It is, to me, not likely to rouse anyone to action, which is exactly what's needed across the board.
And politicians need to be pushed, no matter how well they might do, further and further and further.

The devastating floods in BC

The devastating floods in BC were at first heavily attributed to rain, an atmospheric river, and climate change. Slowly, some flooded areas were linked to clear-cut logging, where water was not retained by disappeared forests. Also, it turned out that the amazing agricultural bounty near Abbotsford comes from having drained Sumas Lake. So, while we need to plan for a changing climate, the floods in BC were not just about climate change.

Except that climate change is

Except that climate change is exactly about land use, though it seems that the "overall population" is just starting to connect the dots.
Onward and upward.
Never, ever-ever (ever-ever, ever-ever) give up!!
There was a time in my life when I needed to remind myself of that multiple times a day, and used it as a sig.line.
It came from a glorious cartoon, of a frog in the bill of a crane ... its head disappeared on the way to the crane's gullet, and its front digits squeezed tightly around the crane's neck.
Everything wants to live. We need to recognize our animal survival instinct, moving to action -- and to honor it by never giving up.
For an example of one way that looks, consider the Wet'suwet'en. Do one action to support them. One action by one person isn't enough, but, y'know, grains of sand on a beach, drops of rain in a bucket, against death by a thousand cuts.
Never, ever-ever (ever-ever, ever-ever) give up!!!!