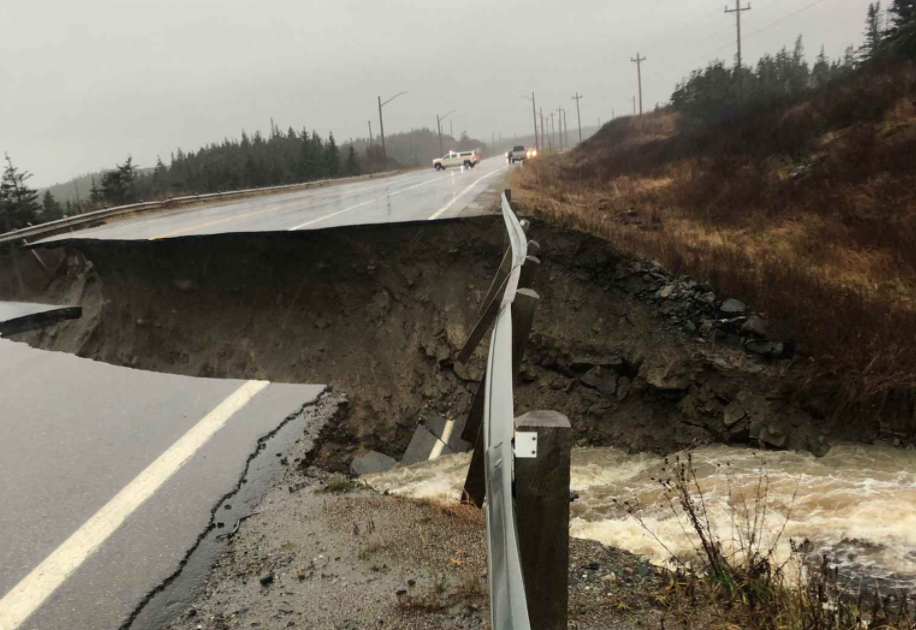 The storm hitting Newfoundland this week has washed away parts of the Trans-Canada Highway. Photo via RCMP Newfoundland and Labrador Twitter
Previous story
Next story

Just a week after a catastrophic storm hit southern British Columbia, Canada's East Coast has been battered by a similar weather event causing damage across the region and destroying parts of the Trans-Canada Highway in Newfoundland.

The atmospheric river, a narrow, substantial plume of moisture that can create extreme rainfall and flooding, started Monday evening and has been slowly moving its way across Atlantic Canada. In Cape Breton, N.S., one county saw intense flooding that is set to take “days or weeks” to repair. Meanwhile, as of Wednesday, Channel-Port aux Basques, N.L., is completely cut off from the rest of the province after the town saw around 150 millimetres of rain.

“Environment Canada is forecasting another 100 mm of rain today, so with that number, the roads and conditions could change. This is an evolving and acute situation,” he said. “... We will repair the roads as quickly and as safely as possible.”

Travel to, from and within the province has been disrupted by the storm. One of the two ferries servicing the mainland to Newfoundland and Labrador is in Channel-Port aux Basques and has ceased operations. Running from North Sydney, N.S., the trip takes six to eight hours. The other ferry route, which departs from the same town in Nova Scotia, takes around 16 hours to reach a farther point of Newfoundland and Labrador.

“We have been in touch with [the ferry operator], and they’re working with our emergency preparedness crew to ensure there will be a safe return of operations,” said Furey.

The Retail Council of Canada also warns retailers will encounter difficulties moving things through the province with the shutdown of the ferry and the highway but says damage is still being assessed.

Furey said the government is “currently not worried about the supplies today, but there is a plan and contingency in place should things change.”

Now that we have more light, here’s a better look at the southern washout on the #TCH. #Nlwx #cbcnl pic.twitter.com/Pf4GyRzSbz

Transportation and Infrastructure Minister Elvis Loveless said four portions of the Trans-Canada Highway are washed out and that repairing infrastructure will be difficult. He said once the rain is over, the government will be able to assess the damage and decide how to repair it.

As of Wednesday, Channel-Port aux Basques is completely cut off from the rest of Newfoundland and Labrador after the town saw around 150 millimetres of rain, which destroyed parts of the Trans-Canada Highway. #ExtremeWeather

“It’s a big storm, we know that, but our crews are ready out in the elements. It’s a challenging one, but one that we’re ready for. And hopefully, over time, we can get the roads operational and back to somewhat normal.”

Canada is “sandwiched between atmospheric rivers” right now, according to Weather Network Canada. During the two-day storm that slammed B.C. last week, Environment Canada says the city of Abbotsford saw 172 mm of rain, while Hope received 252 mm. The extreme weather on the West Coast has so far claimed at least four lives, disrupted supply chains and forced evacuations throughout southern B.C., while the rainfall also triggered landslides that washed out sections of the Trans-Canada and Coquihalla highways. The province is expecting another storm later this week.

Atmospheric rivers on the West Coast are typically longer than their East Coast counterparts, Weather Network Canada says, with the large mountain ranges in the West also leading to more precipitation. But other features in Atlantic Canada can affect the severity of an atmospheric river in the region.

“While the East Coast doesn’t have as much terrain, one feature that does increase the impacts is the large river basins [such as the Saint John River],” the network says.

“These can collect water over a large area and funnel it, creating floods comparable to a spring snow-melt event in a short period of time.”

As some evacuees return home, B.C. braces for storm