With roads destroyed, volunteers take to the skies to feed isolated B.C. communities 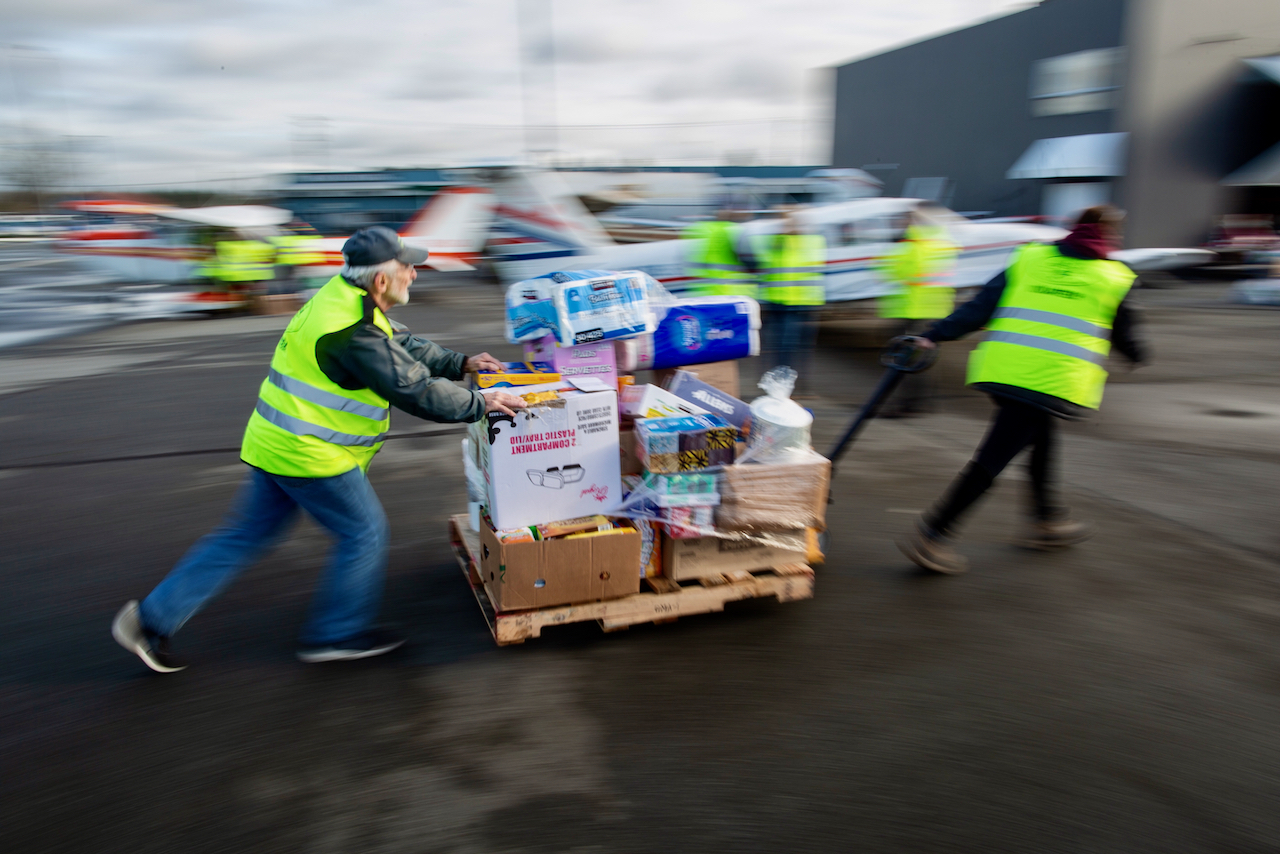 It was cold and near sundown at the Langley, B.C. airport Friday afternoon as Shaun Bradley Heaps in his signature shorts greeted a team of fellow pilots returning from an emergency mission delivering food and necessities to flood-ravaged southern B.C. towns.

"There's butter chicken and samosas over there," said the pilot and member of the West Coast Pilots Club, pointing towards the glowing yellow door of a nearby hangar. The coolers filled with curry, boxes of crispy samosas, and chapatis hand-wrapped in aluminum foil were donated by a local Sikh temple earlier that day, he said.

Inside, roughly a dozen other pilots and volunteers were relaxing after delivering essential goods through rugged mountain passes. For more than two weeks, this volunteer flying squad - Heaps' brainchild - has collected thousands of pounds of food and other essentials from across the Lower Mainland and used privately owned propeller planes and helicopters to deliver it to roughly 30 communities isolated after last month's floods. Money for fuel and supplies has come out of their own pockets or from donations.

On Friday alone, the crew shipped roughly 9,000 kilograms of goods to places like Merritt, Boston Bar, and Siska.

"A bunch of private pilots are doing more than the federal government," Heaps said as he waited for another flight to land.

While he acknowledged authorities have provided some support, people in the stranded communities are telling him the provincial and federal governments seem content to leave it to volunteers and donations to meet people's ongoing needs. "So we're just keeping on resupplying and resupplying," he said. “How (else) are they supposed to survive?”

About two weeks ago, Heaps reached out to the joint federal-provincial team co-ordinating air support to impacted communities on a Canadian Air Force commander’s advice. He hasn’t received any updates since.

“The province has had the resources required to resupply communities, and to date formal air support requests from communities and other agencies have been fulfilled by these resources. Daily deliveries and transport flights are continuing, and we have not yet depleted our air support capacity,” said a spokesperson for Emergency Management B.C. “To date, the Air Branch at the Provincial Emergency Coordination Centre (PECC) hasn’t received a request from West Coast Pilots.”

The coordination needed to keep the system running smoothly was on full display Friday morning even before the first flights took off. Crews in fluorescent yellow vests hauled pallets packed high with goods out of the West Coast Pilots Club's airside warehouses to the tarmac where about a dozen planes were waiting.

A team of volunteers is airlifting food, water and basic necessities to B.C. communities cut off by last month's historic flooding.

Held together with plastic wrap, each pile had been carefully built by the volunteers to contain most items on "shopping" lists sent to the group by impacted communities, said Brenda Lennax, the team's dispatch manager. Lennax runs several small businesses in Maple Ridge, B.C. When the floods hit, she told all her clients she was taking time off to help out - even as her own family was evacuated.

"I'm supposed to be here," she explained during a brief lull in the packing frenzy.

The first plane was loaded within fifteen minutes: Costco-size boxes of granola bars and Kraft Dinner squeezed behind passenger seats. Twelve-packs of water and pop were propped against mega-packs of diapers, baby wipes, and toilet paper. Bags of chicken and livestock feed covered the floor. Fleece blankets filled any remaining crannies before the pilot latched a cargo net over the load to keep it in place.

"It has all been coming from all the Sikh temples, Sikh communities, Hindu temples, Jews, Muslims - all community churches are donating a ton of food," explained the group's supplies and provisions manager Pritpal Singh Sekhorn as he double-checked each load. "(The flying squad) is bringing everyone under one umbrella to reach the flood-affected communities as soon as possible."

There are enough donations to fill three airport hangars and a nearby warehouse nearby - and Heaps said more keeps coming.

"It's endless. And if we need dog food, they send dog food. They bring batteries, horse feed...(we) make a phone call and it shows up."

Most communities are still weeks or months away from regular road access and people and animals need to eat, so the excess of supplies is unlikely to go to waste. And with Christmas near, the flying squad is doubling its efforts to make the holiday easier for people cut off from friends and family.

"It's all about love," Lennax said.

Editor's Note: This story was updated on November 6th, 2021 to include Emergency Management B.C.'s response.

Wonderful story. I've been thinking about towns like Boston Bar which have been cut off by the Highway 1 washouts. There hasn't been much media coverage about these small communities. Thank you to these volunteers for helping. It may be a long time until road access is restored...