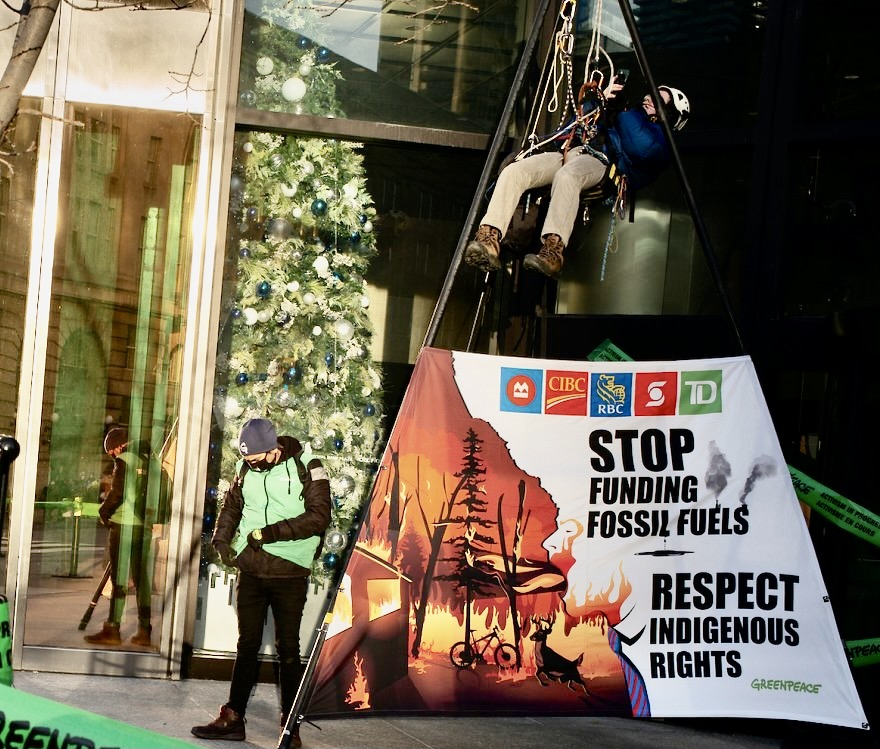 A protester hangs from a tripod outside the headquarters of the Royal Bank of Canada during a Greenpeace protest on Dec. 7, 2021, in Toronto. Photo by Ian Willms / Greenpeace
Previous story
Next story

Two Greenpeace activists were hoisted above the entrance to the Royal Bank of Canada’s Bay Street headquarters on Tuesday, part of a sustained campaign to get the country’s banks to divest from fossil fuel projects and respect Indigenous rights.

It was the second time in a little more than a month that climate activists have targeted the site, after blocking traffic for most of the day during a co-ordinated global day of action in late October.

“Unfortunately, climate disasters are knocking on our doors now, or knocking them down may be a more accurate thing to say, and people’s lives are being disrupted,” said Juan Ortiz, a 28-year-old Greenpeace spokesperson and activist who handed out flyers during the event.

Ortiz said recent floods, fires and heat waves in British Columbia should be a wake-up call to the wider public, and that momentum was building in their campaign to raise awareness of the role banks play in funding fossil fuel projects that contribute to global heating.

“This is not something that’s in the future anymore. It’s happening now and it’s happening at home,” they said. “It’s impossible to ignore.”

Greenpeace says that Canada’s top five banks — RBC, Toronto-Dominion, Bank of Montreal, Bank of Nova Scotia and Canadian Imperial Bank of Commerce — are among the top 25 global backers of fossil fuels, providing more than $800 billion in financing since the Paris Agreement was signed in 2015.

The activists sought unsuccessfully to deliver charred wood fragments from homes in Lytton, B.C., that were destroyed by fires this summer to the desks of bank executives, including RBC chief executive Dave McKay.

“There’s a lot at stake, and we want them to really see the human impact of their decisions,” Ortiz said.

More broadly, Greenpeace is seeking the immediate end to Canadian banks' financing of new fossil fuel projects and to ensure the free, prior, and informed consent of Indigenous communities to any projects they do fund.

“There’s a lot at stake, and we want them to really see the human impact of their decisions,” Juan Ortiz of Greenpeace says. #FossilFuels #Banks #Divestment