The small group huddled across the street from Royal Bank of Canada’s Bay Street headquarters in Toronto on Friday afternoon didn’t take up much space, until they did.

Just after 2 p.m., the assembled climate justice advocates dispersed onto intersecting Wellington Street, bicycles and a motorized wheelchair and their users to the front and, after a moment of tension with the first two drivers inconvenienced by the action, set up a camp that lasted through the rest of the working day.

Once they’d swept the streetcar tracks and set up a sound system, organizers used cardboard cutouts and paints to create a distorted version of RBC’s lion logo being eaten by a bear.

The message was #RBCisKillingMe, and the institution most invested in fossil fuel projects out of Canada’s five top banks, was the primary — but not sole — target at the Toronto event for this global day of action.

"It is all of them,” said Rivka Goetz, a 21-year-old University of Toronto student involved in a climate justice group there. “We're here in the financial district, our banner here has all the logos on there, the Filthy Five is the new slogan everyone's been saying. All of these Big Five banks in Canada are massive funders of fossil fuels.”

Campus activists secured a big win from the university earlier this week when it agreed to immediately begin divesting its $4-billion endowment fund of fossil fuel investments.

“If we want to do anything to curb the climate crisis, we need to stop giving our money and our power to fossil fuel companies,” Goetz said. “We don’t have enough time left to be just relying on policy decisions.”

Toronto throwing down hard for #RBCisKillingMe. They blocked Wellington St to do this. #DefundClimateChaos now! pic.twitter.com/jKpZfNyuOr

The global action comes just ahead of COP26, the UN climate change conference, where world leaders will try to come to agreement on a string of issues related to the technical, logistical, financial, and ideological realms of the crisis.

The global climate justice movement focused its protest energy directly on big banks who bankroll fossil fuel projects on Friday, with Royal Bank of Canada marked as enemy No. 1 in actions across Canada. #RBCisKillingMe

For an hour, speakers harangued the bank, demanding it stop funding oil and gas, especially the controversial Coastal GasLink pipeline.

RBC has invested some $208 billion into fossil fuel since the Paris accord, Greenpeace says, including $6 billion for TC Energy’s Coastal GasLink pipeline construction project, which will take fracked natural gas from Dawson Creek through the Rockies and other ranges to Kitimat, B.C., to be exported to Asian customers.

That pipeline travels through unceded Wet'suwet'en territory, where there has been sustained resistance to the project. A hereditary chief from one of the five bands within the Wet'suwet'en nation was one of two people arrested at a blockade outside a workers camp there earlier this week, CTV BC reported.

Zoe, a 21-year-old woman from the Musqueam Nation who declined to share her last name, said every one of her friends has a pipeline cutting through their homelands.

Pipelines “destroy the lands and our connection to it,” Zoe said.

Esmé Decker, a 19-year-old English student and organizer with Climate Justice UBC, said the main message of the Vancouver protest was to pressure RBC into revoking funding for the Coastal GasLink pipeline.

“We’re here on this global day of action ahead of COP26 because this conference is about climate finance,” Decker said.

“We are here to pressure the largest fossil fuel financier in Canada — RBC — to divest from all fossil fuel,” she said.

Even short of divestment, Decker said her group wants to see RBC and the B.C. government honour the UN Declaration on the Rights of Indigenous Peoples, which requires free, prior, and informed consent for projects on Indigenous land, something she said the Coastal GasLink project does not have.

“I hope that (political) leaders see this movement around the world and really take it to heart,” Decker said.

Severn Cullis-Suzuki, executive director of the David Suzuki Foundation and daughter of famed environmentalist David Suzuki, urged the bank to divest from all oil and gas, which she called a “sunset industry.”

She made a particular call out to Freda Huson, a Wet’suwet’en chief and one of the key land defenders who have been facing off with the Coastal GasLink pipeline for over a decade.

“No other generation has stood where we are today. We alive today are the stewards of history. This is our watch, but we have so many ancestors who stand with us,” she said.

After a series of speeches, activists held a ceremony awarding RBC president McKay an award for being the largest financier of fossil fuels in Canada, as well as for the “leading role” they said he plays in funding oil and gas projects around the world. 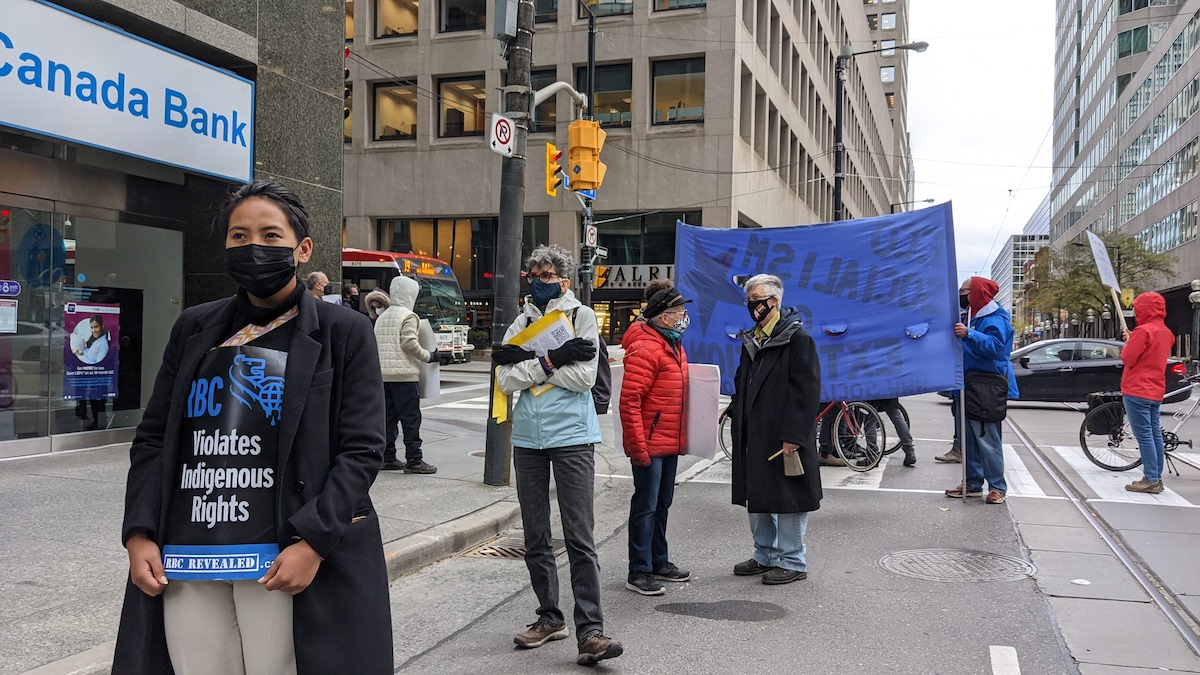 Chemi Lhamo, left, showed up in Toronto in solidarity with the Wet'suwet'en First Nation and to make sure Tibet is part of the climate justice conversation. Photo by Morgan Sharp

Back in Toronto, standing in solidarity with the Wet'suwet'en and other Indigenous peoples was one of the main reasons Chemi Lhamo was out claiming the street.

“We are currently going at a pace that is going to kill Mother Earth,” the 25-year-old said. “Everybody already knows that we're in a climate crisis and so much of what we've already done and the harms that we've caused on Mother Earth are irreversible, and so time is ticking, and we must act now.”

She said she was also there as a Tibetan, noting climate justice conversations are happening across the world but that "Tibet has been kept out of the picture" despite countries and regions downstream from the mountainous region controlled by China facing both flooding and droughts caused by the world’s biggest emitter’s redirection via dams.

"This is a call to action for all of the world leaders who proclaim about human rights and talk about all the progressive ideas, talk about becoming net-zero by a certain age,” she said. “The current conditions of the Earth are such that we cannot afford to just have all these fake promises about being net-zero. It's about putting your money where your mouth is instead of putting your money in all these pipelines and all these things that are causing irreversible harm to our Earth.”

Jesse Winter is an award-winning photographer and writer currently based in Vancouver, British Columbia.