How flood upgrades could save wild salmon in British Columbia 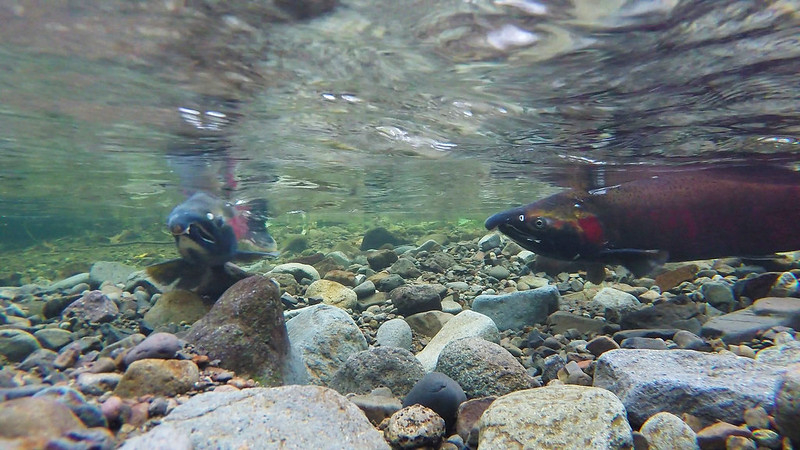 Coho spawning on the Salmon River in the Pacific Northwest. Photo courtesy of Bureau of Land Management Oregon via Flickr
Previous story
Next story

British Columbia sits at a fork in the road, and only one pathway leads to a brighter future for salmon, says a charity working to rebuild the species’ population.

After last month’s atmospheric river in the province caused at least $450 million in infrastructure damage, Watershed Watch Salmon Society is calling on the government to keep fish front of mind when rebuilding.

In Sumas Prairie, pump stations such as the Barrowtown facility are responsible for keeping water off the land. However, the way they function kills unlucky fish that get caught up in the machinery. Other similar stations are situated all along the Fraser to prevent flooding and keep stream levels even. However, if fish go through the stations, they get ground up and die.

Flood prevention dikes also pose a problem because they block 1,500 kilometres of salmon habitat in the Lower Fraser River.

There are alternatives to the dikes, pump stations and other flood protection infrastructure that save fish and still protect communities, said Aaron Hill, executive director of the organization. Some upgrades have already taken place in the province, such as the fish-friendly floodgate the group completed through a project called Resilient Waters in the Lower Agassiz Slough, but Hill said it’s only scratching the surface.

In terms of how last month’s weather event impacted salmon, Hill said it’s too soon to say. Fish were seen in farmers' fields and among park benches; pollution was detected in the floodwater.

However, it’s not too soon to make moves to protect salmon, said Hill. Canada’s National Observer caught up with him to get the lowdown on how that could happen with fish-friendly flood design and why he thinks it should be top of mind for the government as B.C. rebuilds.

How do you make flood infrastructure fish-friendly?

Salmon-friendly infrastructure is working elsewhere and could save thousands of salmon in B.C. a year. #SalmonHabitat

For example, with the flood pumps, instead of using a small tube with a small turbine, you use a big tube with a very big turbine that spins slowly. So, it moves the same amount of water, but it doesn’t chew up the fish when it pumps.

Floodgates — the bad ones are really big and constructed from heavy steel. They’re top-mounted and really only open when there's a huge volume of water moving through. And then the rest of the time, they're just closed. So, you can use lighter side-mounted aluminum gates that open and close really easily with a small amount of water. Or you just have people manually open and close the gates when they need to be open and closed.

Restoring wetlands can help, too. How about dikes, which block off fish habitat, is it possible to make those fish-friendly?

There are a number of natural flood defences or nature-based solutions.

One of them is a setback dike, where the dike is built back from the riverbank a little way to give the river a bit of room to flood safely. You need to compensate farmers and landowners for giving up land along the river, but most of those lands are getting hammered by flooding anyways, so they're quite vulnerable.

Or you’ll have a smaller dike along the riverbank, and then a much larger dike set a bit farther back. So you can have a bit of land that gets flooded from time to time behind that smaller dike, but everything behind the big dike is still safe.

Does fish-friendly infrastructure protect communities in the same way?

There's so many successful models in place that show these methods of flood protection actually make our community safer from flooding. And they save money in the long run. It's not like we're giving up flood protection in order to save fish. We can do both.

Fish-friendly infrastructure is working in other places. Where and how?

Washington state is a great example. They're right across the border from us and have very similar challenges in geography, and they have a great program called Floodplains By Design where farmers, landowners, tribes and different levels of government are all collaborating. They’re making their communities safer from flooding and they’re opening up salmon habitat. And we can absolutely do that here.

In Holland, as well. There's a lot of Dutch farmers in the Fraser Valley and their relatives back home have been doing this stuff really well for a long time.

Wild salmon face many threats. How much of a difference would this make?

I think it really depends on the exact salmon populations that we're talking about. Because salmon face a wide array of threats, it's really hard to say for any one of them how much of a difference it'll make. It changes from year to year, depending on what's happening. I don’t want to just speculate, but I will say that at a minimum, this would mean thousands more salmon would survive every year. How many thousands? I can’t say.

What would you like to see from the government?

There are a couple of things. There is really broad support for this from First Nations and from local government, but we really need the province to step up. They've committed a little bit of money to the BC Salmon Restoration Innovation Fund, which is a joint federal-provincial initiative.

However, during the last provincial election, the government promised to make the BC Watershed Security Fund. Fish-friendly flood infrastructure is a prime example of the kind of thing the fund should support. But now that it's a year later, and they're not even close to having that fund ready, we're really worried that they're going to drag it out until the next election. And it's so obvious that there's an urgent need for this stuff to be done right now.