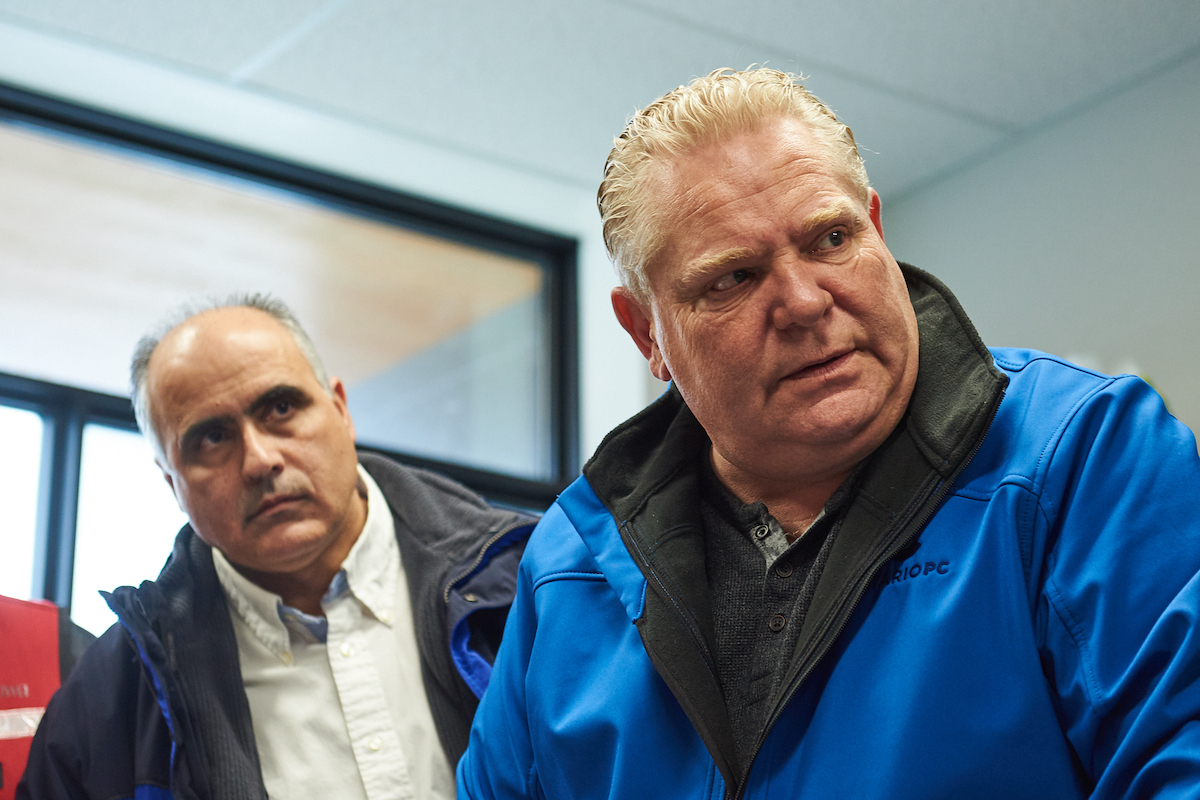 Ontarians head to the polls in six months. It’s hard to predict what the public mood will be on June 2 as voters make their way to the ballot box, but it’s safe to say aside from having a chance to weigh in on how they felt the pandemic was managed in the province, issues around affordability will be of top concern for most.

And if you care about affordability, you should care about climate change. While Conservative politicians across Canada have done a very good job of maligning climate change mitigation as fundamentally unaffordable, the reality is, if we don’t act now on climate change, we’ll be dealt a much higher bill down the road.

In 2019, Green Party of Ontario Leader Mike Schreiner called on the Financial Accountability Office (FAO) to report on the financial costs of climate change, specifically the financial impact on the province’s public assets. On Dec. 7, the report was released.

It’s important to note the report itself was limited to direct costs on public assets. Indirect costs — such as deaths, power outages, supply chain disruptions, or damage to privately owned buildings — were not covered. Additionally, the report only focused on three aspects of climate change: extreme heat, extreme rainfall, and freeze-thaw cycles.

In the nearer term, assuming a stable climate for the rest of this decade, we’re looking at a massive increase: “The FAO estimates that in the absence of adaptation, the cumulative cost of maintaining public buildings in a state of good repair will increase by about $6 billion relative to baseline spending in a stable climate over the remainder of this decade (2022-30).”

None of this is good news. It’s particularly grim once one considers that Doug Ford and the PCs haven’t just stalled on the climate file but have been actively hostile to meaningful action on climate change.

One of the first policy actions of the Ford government was to cancel Ontario’s cap-and-trade program, which led to the scrapping of a number of green initiatives, including retrofitting homes and businesses with more energy-efficient technologies and rebates for electric vehicles (EV). The Ford government also cancelled hundreds upon hundreds of renewable energy projects, and famously lost a court battle that compelled gas stations to put stickers rife with misleading information about the federal price on carbon on the pumps.

With Ford at the helm, Ontario has undoubtedly slid backwards in the fight against climate change with myopic and populist policy decisions.

Ford might not care about the climate in the same way or for the same reasons that more left-leaning politicians do, and ultimately we don’t need him to. We just need him to take the profound implications of climate change seriously. If the loss of human or animal life isn’t convincing, then perhaps the fiscal impacts will be.

No reasonable person can contend climate change does not pose significant costs. In addition to the daunting numbers in the FAO report, consider the fact that according to the Insurance Bureau of Canada, insured damage caused by extreme weather events cost $2.4 billion in 2020. Climate change is already costing us a lot of money.

In the last election, the Progressive Conservatives were wildly successful in framing the issue of climate change action as being an affront to regular, everyday voters. Indeed, Ford and the PCs tried to paint anyone who understood the science behind climate change — and was compelled to want to do something about it — as an out-of-touch elitist hell-bent on wasting taxpayer dollars.

Ford basically built his political brand as being the definitive champion of the taxpayer. It’s all but certain that in the upcoming campaign, Ford and the Ontario PCs will once again claim to be the only party that respects taxpayers and their hard-earned dollars. However, without meaningful policies to help mitigate the worst impacts of climate change, the claim to be looking out for taxpayers falls apart.

On that insured damage thing

On that insured damage thing . . . I'd be willing to bet that for 2021, it'll be a lot more than 2.4 billion in BC alone. Unless the insurance companies can wiggle out of paying most of it, but that's even worse.

As Robert Reich has been

As Robert Reich has been saying recently; those who express horror at the costs of some choices are purposefully ignoring or dismissing the cost of doing nothing. Had the BC governments been more proactive over the last twenty years, we could have: 1) worked on retrofitting homes to save the lives of those who died during the heat dome, 2) worked on forest conservation that could have reduced the devastation of fire seasons in recent years, 3) improved flood management measures - a risk many had warned of - to reduce or even avoided the extent of destruction see this year.
Doug Ford and his enablers have spent the last three and a half years wreaking havoc on the capacity for Ontario and its residents to survive in a world that was unimaginable just a short time ago.
P.S. Welcome to your new gig!

Thanks for this. I’m still

Thanks for this. I’m still bewildered by Doug Ford’s victory. It was pretty clear that he would not be climate-friendly. And of course he is not. Also distinctly unfriendly to endangered species, people living in long term care homes, university students in Northern Ontario (his government sat on its hands while Laurentian University foundered, along with its stellar Indigenous Studies program and a great deal more), essential wetlands, ( MZOs, anyone? ) and consultation with First Nations in the Ring of Fire. Did I mention Toronto city council? I am grateful to the National Observer for its attention to all this. I simply do not understand how, in a healthy democracy (which I still believe Ontario has) citizens could elect such a train wreck for our province.

Thanks for this. I’m still

Thanks for this. I’m still bewildered by Doug Ford’s victory. It was pretty clear that he would not be climate-friendly. And of course he is not. Also distinctly unfriendly to endangered species, people living in long term care homes, university students in Northern Ontario (his government sat on its hands while Laurentian University foundered, along with its stellar Indigenous Studies program and a great deal more), essential wetlands, ( MZOs, anyone? ) and consultation with First Nations in the Ring of Fire. Did I mention Toronto city council? I am grateful to the National Observer for its attention to all this. I simply do not understand how, in a healthy democracy (which I still believe Ontario has) citizens could elect such a train wreck for our province.

My sense is that people were

My sense is that people were so ticked at Wynne, for valid and grotesquely invalid reasons, that they responded to the dog-whistle that Ford and his controllers and thralls let loose. I don't think they voted so much FOR Ford, as against Wynne. Dumber than dirt. No, she didn't walk on water, and yes, she made some mistakes, but she was intelligent, educated, informed, committed, ethical, thoughtful--and look at the stumble-bum we got to replace her.

The list of his offenses and crimes against Ontario, and its citizens, is longer even than that of Mike Harris's--and that takes work.

We have never recovered from Harris' crimes, and we will never recover from Ford's. Once the environment is ruined, once social programs are slashed, once privatization is coddled and entrenched in our health care system--well, he's accomplished what his masters "hired" him for.

And we, the citizens, the taxpayers, the victims, have absolutely no recourse against him, or his actions. He will walk away strutting back into corporate-ville, with a pension and perks, and we will have been violently assaulted and victimized, again.

There are still people who think DoFo&Co have done a great job--on COVID for example. Which would be laughable, if it hadn't cost so many lives.

I'm willing to lay money down

I'm willing to lay money down that, despite all the blanching and belly-aching about the deficit Wynne's government left behind, the one that Ford et al will leave us to inherit will make it look like small change.

Ford got in for much the same

Ford got in for much the same reason as Trump did. Except that there was an end-run around the party itself, who had chosen Patrick Brown, far more moderate, as its leader. The party machine booted him, for no real reason, and put in place someone stupid enough to toe the Harris-type line.
He lied through his teeth about everything. He has continued to do so throughout the term, and probably will in the next election as well. Like Trump's people, Ford Nation is made up of those who stood to gain from his brand of politics, plus a whole lot of uneducated people who get their facts from social media, and some rightfully angry people whose livelihoods and enjoyment of their own farms were destroyed by completely inappropriately placed windmills, that weren't properly grounded, to boot. I assume only improperly grounded windmills would generate current travelling through the ground and harming livestock.

Wynne was not principled; she was well educated, but not very smart, given that she sold off a majority interest in the hydro power system that was given by its founder to the people of Ontario, in perpetuity. She had no right to sell it, and did so for far, far less than real value, and insisted that the province would still be able to control its operation, as it would be the largest shareholder. That's not smart, it's idiotic. The whole thing was strictly a back room deal. Worse, she also cleared the way for privatizing municipal and regional electricity providers. She wanted also to open more gas plants, and the "ring of fire" ... kept welfare and disability rates increases below inflation. The residents of the area she wanted to saddle with gas plants prevented them from happening, and the whole fiasco cost Ontarians a mint to get out of. And then had the gall to run again. She was rightfully bum-kicked out.
Numbers of people claimed it was because she was "a lesbian feminist." BS: ppl knew she was lesbian when she was elected.