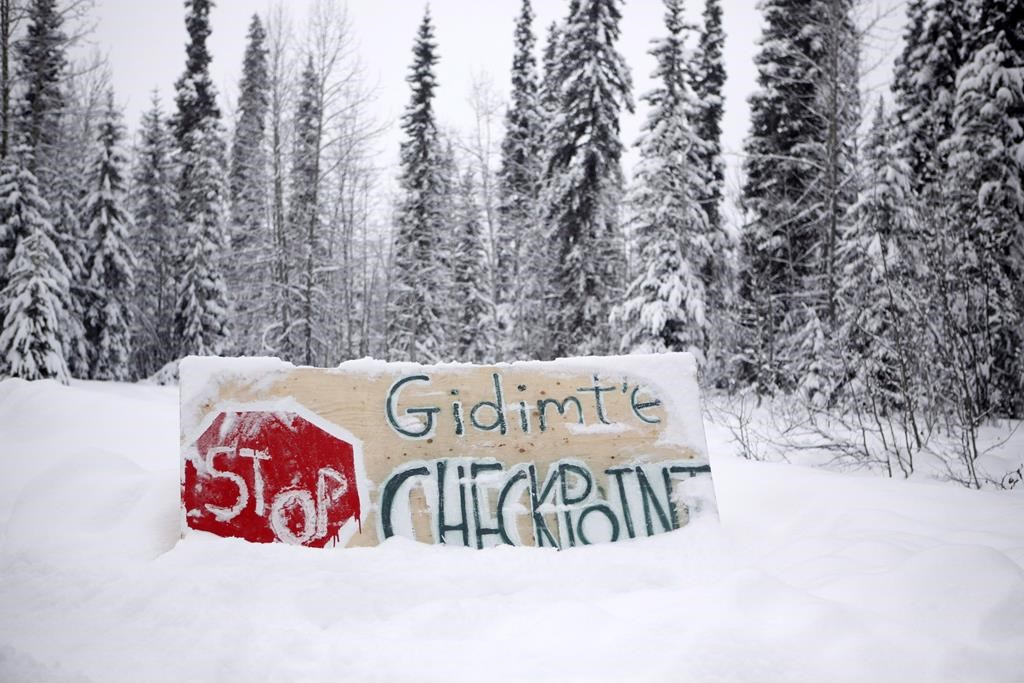 A Gidimt'en checkpoint near the Unist'ot'en camp off a logging road near Houston, B.C., on Wednesday, Jan. 9, 2019. File photo by The Canadian Press/Chad Hipolito
Previous story

The RCMP say they are investigating allegations that protesters threatened security officials, set off flares and damaged vehicles at a drill site for the Coastal GasLink pipeline in northern British Columbia.

The Mounties say in a statement released Monday that officers were called to the site along a forest service road near Houston on Sunday.

They say anyone blocking worker access to the area is in breach of a court-ordered injunction.

The elected council of the Wet'suwet'en First Nation and others in the area have approved the pipeline, which would transport natural gas from Dawson Creek to Kitimat.

A statement from a group called the Gidimt'en Checkpoint says an area known as Coyote Camp has been reoccupied and an eviction notice that was issued to the company by the hereditary chiefs last year has been enforced.

Members of the Gidimt'en clan, one of five in the Wet'suwet'en Nation, had re-established blockades last month before several people were arrested while protesting construction of the 670-kilometre natural gas pipeline.

It is shameful for the

It is shameful for the National Press to publish such a poorly researched article from the Canadian Press. The elected Wet'suwet'en band council is only a part of the nation. The article totally misses the issue of the elected band councils' authority, equivalent to municipalities, versus the one of the hereditary chiefs whose authority has been recognized by the Supreme Court of Canada recognizing in law aboriginal land and title of the nation. This is THE key issue ignored by this typical rendition by the corporate media. I am afraid the National Observer seems eager to join their fray.

I would request that the

I would request that the Naional Observer append editorial notes to this sort of BS claptrap *exceedingly UNBALANCED reportage* promulgated by the likes of Canadian Press.
I got to wondering who "Canadian Press" was ... and why they persist in this dogwhistle reportage. Except it's not really dogwhistle: it's blatant intent to misinform. First error, well, anyone can make a mistake, and reporters have limited time and resources made available to produce stories.
So I tried to find out who owns Canadian Press.
Even their wikipedia entry (from which NO seems to have taken its "bio" materials) are ridiculously incoherent.
It took about 10 seconds (my computer is old and slow and I don't have fast internet) to find that Canadian Press was a non-profit consortium (means they don't pay taxes) that has exclusive distribution rights agreements with Associated Press and its sister APTN which provides voice and video, while AP itself produces text.
Yep, that's the same AP that egregiously edited the stories filed by reporters on the ground to turn upside down and inside out stories about conflicts in the Middle East, and stories involving Israel's role, in particular, and that negotiated "embedded" journalism with western militaries.
Now: even that wasn't enough for Sun Media, who bailed in 2009. After that, a huge investment corporation was one of the three major remaining members. Subsequently, CTV, Torstar and the Globe formed a for-profit corporation, Canadian Press Enterprises Inc., ostensibly because those media "had a pension shortfall" ... and took over the operations of the previous non-profit.
Little wonder they persist in playing up the "elected" or "democratically elected" line, with absolutely no regard for the Supreme Court of Canada ruling, and the shoddy process by which the CGL and TMX were approved.
They also never, (ever-ever, ever-ever) mention that neither operation has ever been in compliance with the conditions of their approvals. Or that neither provincial nor federal authorities bother to do anything about it.
Please, NO, if only in order to avoid looking like a shill for the interested parties, don't post the whole thing, with no editorial comment at all.
I've put in a call to the wire service, and if they don't respond will try to search out what I can find about demanding corrections, and some balance in reportage ... my guess at the outset is that as long as they don't lie outright, they're allowed to wilfully create false impressions.

("Power Corporation of Canada is a management and holding company that focuses on financial services in North America, Europe and Asia. Its core holdings are insurance, retirement, wealth management and investment management, including a portfolio of alternative investment platforms.

My understanding is that the

My understanding is that the band councils authority applies only on the reserve, and basically for the purpose of distributing government funds allocated to the band.
No comments on how democratic that function is.