Threats to Manitoba politicians may lead to security changes 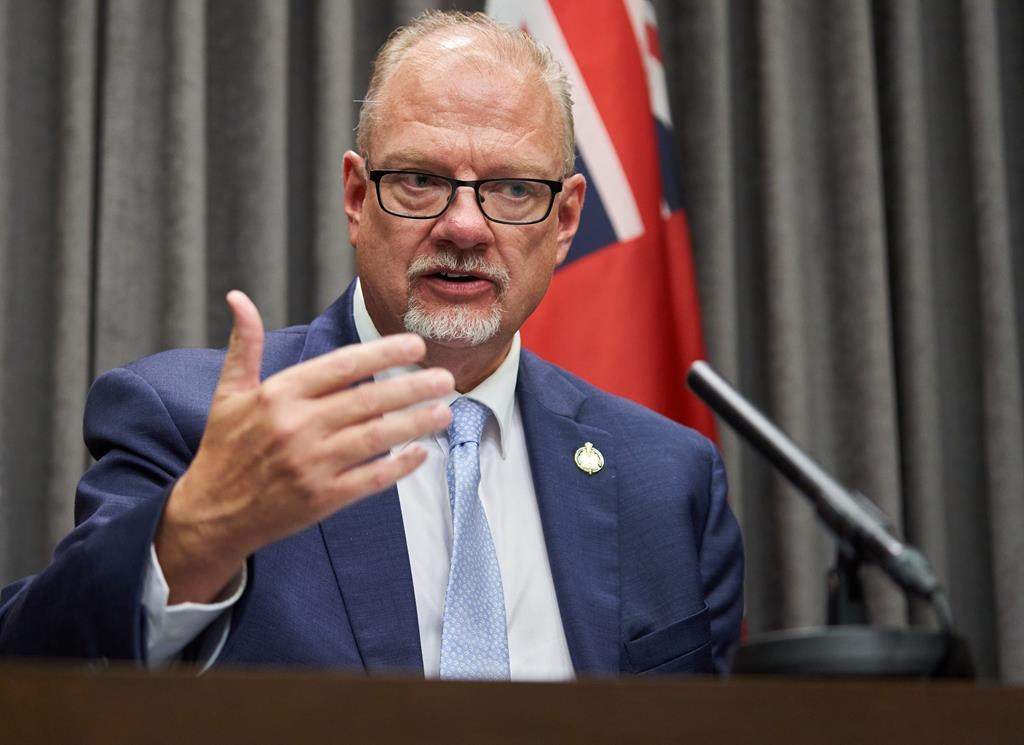 Kelvin Goertzen speaks to the media at the Legislative Building in Winnipeg on Wednesday, Sept. 1, 2021. File photo by The Canadian Presss/David Lipnowski
Previous story

Being a politician or public health officer seems to bring much more of a security risk of late — from online threats, to angry crowds at public events, to protests outside family homes.

In Manitoba, some changes have been made — and more are being proposed — to try to ensure serving in public office doesn't mean putting one's personal safety at risk. One idea is to make people's home addresses less readily available online.

"Social media has tended to change the discourse around life and politics, and so I think this has been a growing concern for awhile, heightened I think perhaps by the pandemic but not specifically because of it," Kelvin Goertzen, a veteran member of the Manitoba legislature who serves as minister of legislative and public affairs, said in an interview.

Manitoba's three main political parties are discussing a few changes to the Elections Act, including doing away with a requirement that the home address of every candidate be published online. Candidates currently have the ability to ask for an exemption, but the default position is to make the addresses publicly available.

The Opposition New Democrats have put forward a private member's bill in the legislature that would establish buffer zones around hospitals, schools, daycare centres and the homes of many kinds of health-care workers. The bill, which would need support from the Progressive Conservative government to pass, would ban any protest against COVID-19 restrictions within the buffer zones.

At the legislature, recent security measures include a reduction in the number of entrances and exits at the stately building.

"I feel safe but ... more recently, there has been some security that we have brought on board. And so we're trying to see what does that look like, making sure that we don't go overboard but that we're looking at the safety and security of everybody."

The most visible sign of security changes occurred outside the home of then-premier Brian Pallister earlier this year. The 9,000-square foot mansion had been in the public spotlight in 2012, when some local media outlets reported on Pallister purchasing the $2-million dollar property.

The number of protests outside the property increased during the pandemic. At one time, people could be seen on the premier's driveway. A security car began to be stationed on site. In 2021, a large fence was erected around the perimeter.

#Manitoba eyes #security changes as threats to #politicians appear on the rise. #mbpoli

Pallister said there were often people right on the property, coming up to the house.

"I'd prefer not to give you examples, there are too many ... I'll just say that no family should be subjected to that," Pallister said in an interview with The Canadian Press in August.

"If it was just me ... I'm a combative guy so I would confront it. But when you involve my wife and our daughters, that's when it's immediately totally unacceptable stuff."

Pallister did not want to talk in detail. He said he's worried that highlighting threats and personal safety issues might discourage people from running for office.

"My wife's not a shrinking violet. She's still got the (University of Manitoba women's basketball) rebound record. You don't get that unless your elbows are pretty sharp. But when you get a mother seeing her daughters exposed to stuff like this, you don't fool around with momma bear, let's just put it that way."

Pallister sold the home shortly after leaving politics and the fence came down.

NDP Leader Wab Kinew said he has been on the receiving end of threats, but did not want to discuss details.

Dr. Brent Roussin, the province's chief public health officer, told reporters last summer he had received threats and, at one point, police called him because of suspicious activity near his property.

On a Facebook page involving people upset by the results of the Progressive Conservative leadership election that saw Stefanson beat Shelly Glover in the race to succeed Pallister, one person posted a reference to the violent riot at the United States Capitol building last January.

"Shelly just needs to give the word and her people will pull a Jan. 6 and install her as premier," the message, posted in mid-December, read.

It had garnered two likes.

This report by The Canadian Press was first published on Dec. 30, 2021.