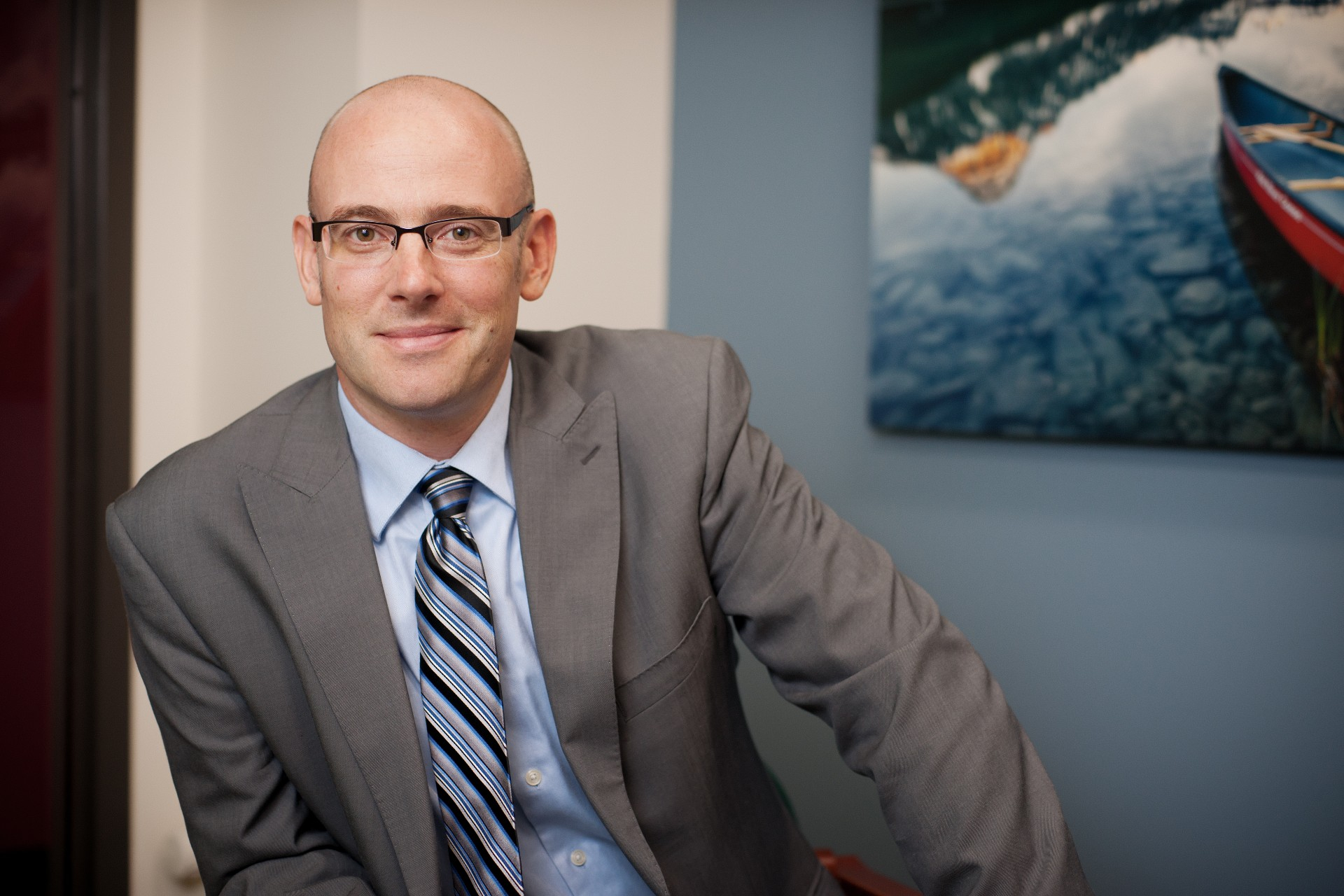 Canada's richest CEOs are getting richer despite the COVID-19 pandemic, according to a new report by David Macdonald, a senior economist with the Canadian Centre for Policy Alternatives. Photo provided by CCPA
Previous story
Next story

While the COVID-19 pandemic meant layoffs or reduced hours for workers, Canada’s richest CEOs recorded their second-best year ever for compensation, according to a new report from the Canadian Centre for Policy Alternatives (CCPA).

The report says that by noon on Jan. 4, the first official working day of 2022, the average CEO would have already earned more than the average worker makes in a year.

“The gap between what CEOs make and average workers make is much higher than it's been historically,” said David Macdonald, senior economist with the CCPA and author of the report, adding the findings show “when companies or the economy does badly, CEOs don't, they're insulated.”

The effects of this inequality are visible in our communities, said NDP finance critic Daniel Blaikie.

“What today's report tells us is that people at the top are able to maintain their income, in fact, their incomes are growing by massive amounts while so many other people are struggling,” said Blaikie.

“We're not going to be able to correct that problem — which is a problem of distribution of income — and all the problems that it creates, like more people living on the street … without thinking seriously about how we tax back some of that wealth at the top.”

While some wealth-tax critics, including research out of the Fraser Institute, say the measures lower long-term growth, discourage savings and investments and are costly to administer and collect, Blaikie calls those “defeatist concerns.”

“What are we supposed to do, just live in serfdom and send them our paycheques?” he asked. “There's got to be a way to make sure that you don't end up with a very tiny part of the population having most of the power and wealth … These are really important issues that I think go far beyond just questions of taxation. They're also questions of power and democracy.”

A new report from @DavidMacCdn at the @ccpa found Canada's richest CEOs recorded their second-best year ever for compensation in 2020, pointing to widening inequality in Canada. #cdnpoli #wealthtax

To combat inequality, he says we need a government that will apply itself to figuring out how to get people to pay their fair share and “what's important is that we start trying these things.”

Macdonald’s report found 30 of the top 100 highest-paid CEOs headed companies that received the Canada Emergency Wage Subsidy (CEWS), one of which is Canada’s highest-earning CEO David Klein of the cannabis company Canopy Growth.

Klein earned just over $45 million in 2020 and the runner-up with nearly $27 million in compensation was Jose Cil, CEO of Restaurant Brands International, which owns Tim Hortons, Burger King, Popeyes and Firehouse Subs.

“So, you've got sort of half of the top paid CEOs who are in there because they changed their pay or because the feds were supporting them, and that, I think, is pretty revealing,” said Macdonald.

But the report reveals this is not the case, with many high-paid CEOs maintaining huge earnings and simultaneously receiving government subsidies.

“It's a trend that seems to be accelerating because the more wealth that this small number of people at the top have, the more power that comes with that and the greater their ability to try to reinforce systems that direct wealth to themselves instead of fairly to everyone,” he said.

“That's why we continue to push and continue to talk about all the various ways the government could not only be raising some more revenue for itself and for the programs that we all depend on, but also to have a fairer distribution of wealth.”

If a wealth tax were introduced, Blaikie says those being taxed would still be extremely wealthy compared to most Canadians and “it's not like anyone's asking them to go live on the street themselves or something like that, we're just asking that they recognize all of the public investment they benefit from as part of how they make their money.”

Finance Minister Chrystia Freeland has now been tasked with establishing a minimum 15 per cent tax rule for top-bracket earners, which would include an attempt to prevent the wealthiest Canadians from reducing their tax burden through various tax planning loopholes.

She was also told to invest in the Canada Revenue Agency to combat tax avoidance, and raise corporate income tax for banks and insurance companies that make more than $1 billion.

The Liberals raised the tax rate from 29 per cent to 33 per cent for people earning more than $200,000 in their first year in office. Because of inflation, the top tax bracket now starts at $216,511.

The real value of reports like this are the questions they raise, said DT Cochrane, a policy researcher with Canadians for Tax Fairness (C4TF), a non-profit and non-partisan organization that advocates for fair and progressive tax policies.

“Why are these almost overwhelmingly white men making these obscene salaries? … Does anyone really deserve $11 million a year? Did they really do anything to earn an extra $95,000 a year?” Cochrane asked.

“You don't have to think about it for very long for the answer to be an obvious ‘no.’”

Sam Levac-Levey’s game plan to save the world

What I learned at COP26

Only second highest year for

Only second highest year for CEO compensation?! What a scandal! The Americans are clearly still way ahead of us at shovelling the working class' money to the super-rich.
Incidentally, on that Fraser Institute stuff, the response kind of conceded unnecessary ground. The fact is that the Fraser Institute and many like them don't do real research, they are basically PR outlets for the wealthy with a fig-leaf of supposed academic merit. But REAL research shows that as societies get more unequal, almost everything, from economic growth to life expectancies, gets worse. Frankly, the Fraser Institute are lying for pay.

I wonder by what time the

I wonder by what time the first workday in the year those CEOs take in at much as a minimum wage worker.
Or the amount that people who cannot work are expected to live on.

"Finance Minister Chrystia Freeland has now been tasked with establishing a minimum 15 per cent tax rule for top-bracket earners, which would include an attempt to prevent the wealthiest Canadians from reducing their tax burden through various tax planning loopholes."

So, the rate that ppl earning under $50K have to pay? That, frankly, is sublimely ridiculous.

And be aware that there's weasel language in there. Not all income is *earned* income.

If one does a quick and dirty comparison of tax rates, and looks at the differences in increases between successive brackets, and the differences in sizes of tax brackets, it becomes clear pretty quickly that brackets get larger as income increases. And the rate of increase isn't even, either, as the higher the bracket, the smaller the increase.

There's a difference between now and when I first started paying taxes, when the higher tax bracket rate applied to the entire taxable income. I got a small raise once, that left me with less on my paycheque on payday, and less income after taxes at yearend than the year before. I remarked wryly to my boss that it wasn't a pay raise that I could afford. He "fixed" it so that I'd net out that year to the same amount I'd made the last year.

The solution "fixed" the problem at the bottom end, but also reduced total taxes payable at the top end.

The actual tax paid by someone at the bottom of the top bracket (rate 33%) is 22%. That's after income splitting and employing all the tax shelters available, maneuvers that are not available to low income earners.

They include all manner of non-refundable tax credits (even for health care expenses). Not that it's germane to a discussion of federal rates, but Doug Ford also made the health care credit, tiny as it was, non-refundable, which it hadn't been.

They amount to welfare for the rich. Welfare for the poor deducts absolutely everything. At one point, people on welfare were supposed to declare the value of hand-me-down clothes given to them by neighbours or relatives for their kids, and excess harvest of, say, tomatoes, passed over the fence by a neighbour.

Basically, in a system that's supposed to be a progressive tax system, in which high income earners pay a higher rate on their earnings than low income earners do, it's become the opposite: and Trudeau's asking for the same rate to be paid by earners of millions, as is paid by people earning minimum wage.

As a separate observation, it was possible to survive on the amounts of personal deductions, for self and children (when the baby "bonus" was $10/month per child) ... but the purchasing power of increases in the basic personal amounts have decreased compared to the value of child benefits. Even before childcare costs are considered.

I have a very difficult time believing that the government was not well aware of they were providing "benefits" to people who should have been ashamed of receiving them, as well as to those who needed them, and those who really didn't need them at all.