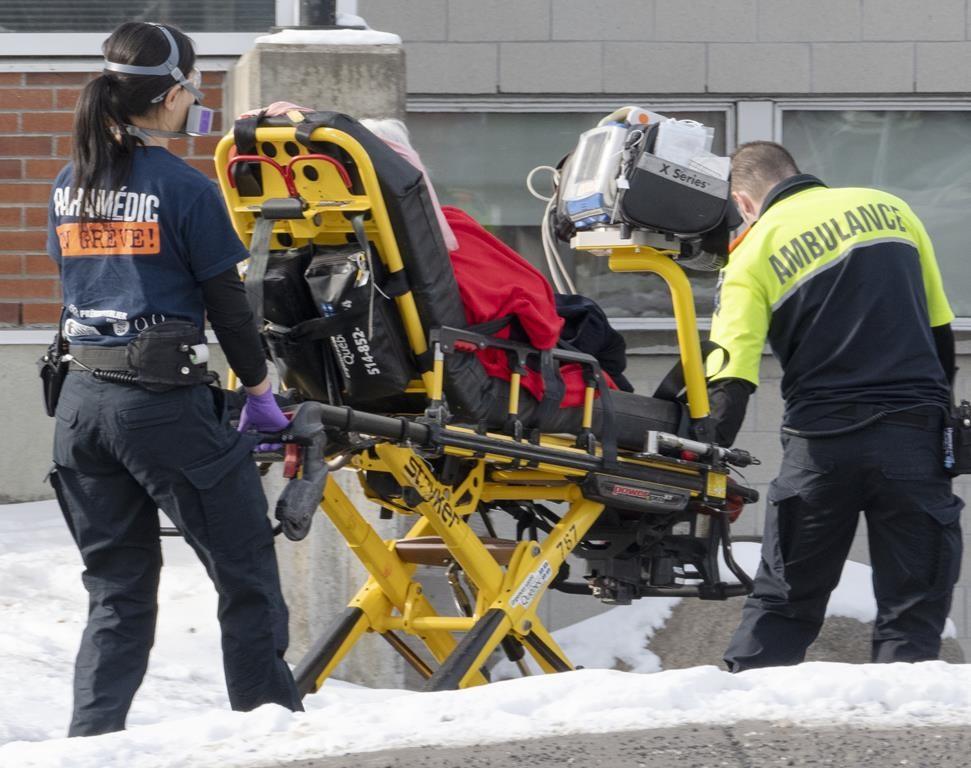 Ambulance workers transport a patient to the emergency room as hospitalizations continue to rise due to the COVID-19 pandemic on Wednesday, January 5, 2022 in Montreal. File photo by The Canadian Press/Ryan Remiorz
Previous story

Canada's health minister says he expects the country to reach a time in the COVID-19 pandemic when provinces consider implementing a broader vaccine mandate to counter rising cases.

Jean-Yves Duclos told a COVID-19 briefing on Friday that such a measure was not currently being contemplated in Canada, but his personal opinion was that the country would get there at some point.

"We know that COVID-19 will be with us for many more months to come, maybe even many years," he said in French.

Given Canada's fragile health-care system and aging population, Duclos said he thinks provinces and territories will consider a broader vaccine mandate over the next weeks and months, while stressing that it would be their decision to make.

"The only way that we know to get through COVID-19, this variant and any future variant, is through vaccination," he added in English, while noting that other measures including personal protective equipment and testing are important as well.

He also noted the high number of hospitalizations involving people who are not vaccinated.

Of the 40,788 hospitalizations reported to the Public Health Agency of Canada as of Jan. 18, about 79 per cent have been unvaccinated people.

People aged 12 to 59 years old were 25 times more likely to be hospitalized with COVID-19 if they were unvaccinated, according to PHAC's data between Nov. 7 and Dec. 4, 2021.

Italy on Wednesday made COVID-19 vaccination mandatory for people 50 and older in an effort to ease pressure on its health system and reduce deaths. France has also ramped up a campaign to push the unvaccinated to get their shots, with President Emmanuel Macron banning them from restaurants, cafés, cinemas and theatres.

Canada likely to get to place where provinces mull vaccine mandates: @jyduclos

Alberta Premier Jason Kenney rejected the idea of mandatory vaccinations in a social media post shortly after Duclos's press conference. While still encouraging people to get vaccinated, he said it is a personal choice.

"Alberta’s legislature removed the power of mandatory vaccination from the Public Health Act last year and will not revisit that decision, period," he wrote on Twitter Friday.

Kenney made a similar pronouncement on vaccine passports last summer, only to reverse the decision in September and introduce a modified passport to arrest soaring COVID-19 caseloads that threatened to buckle the health system.

"While we strongly encourage everyone to get vaccinated to protect yourself and others from serious illness, in Saskatchewan this is a personal choice, not one imposed on you by the government," Moe wrote.

Newfoundland and Labrador’s chief medical officer of health Dr. Janice Fitzgerald called the idea "a huge question that has a lot of repercussions," and said she isn't prepared to answer it immediately, when asked at a briefing Friday.

On Thursday, Conservative Leader Erin O'Toole said he refuses to criticize people who aren't vaccinated and believes “reasonable accommodations” should be provided to people like truck drivers to avoid service disruptions and exacerbating supply chain challenges.

“There is going to be as much as 15 per cent of the population that is not vaccinated,” he said at a news conference.

“In some cases, you will have to try and find reasonable accommodations between keeping people safe and people not losing their job, losing their home, not being able to provide for their kids. I don't think that position is irrational when people's lives are on the line.”

Canada's chief public health officer urged the seven million eligible Canadians who have not yet received a dose of COVID-19 vaccine to do so, while also calling for everyone else to get a booster shot when they can.

Dr. Theresa Tam said the average daily case count rose 65 per cent from last week, with an average of close to 42,000 cases being reported daily over the past seven days up to Wednesday.

She said this is four times the case count during the peak of the third wave last spring, and even then, the count is an underestimate given that testing is challenged in many parts of the country.

While evidence from ongoing surveillance and international studies suggests the risk of hospitalization from Omicron is lower compared to Delta, the sudden acceleration of the new variant is driving a rise in hospital admissions, Tam noted.

She said an average of close to 3,650 people with COVID-19 were being treated in hospitals daily, with almost 600 in intensive care units, representing weekly increases of 91 per cent and 25 per cent respectively.

On average, 39 deaths were reported each day.

Provinces have stressed the dire situation that Omicron has created for their economies and hospitals.

"Record hospitalizations, record cases and record absenteeism right across the board," Ontario Premier Doug Ford described after visiting a COVID-19 vaccination clinic in Toronto on Friday.

British Columbia's Health Minister Adrian Dix said the system is threatened not just by the number of patients taking up beds in hospitals, but also the number of hospital staff who have to take time off because they've contracted the virus.

B.C. has paused scheduled surgeries to "limit capacity so we have space for patients with COVID-19 who may need hospital care and in addition, and just as importantly, to deal with issues of medical absenteeism," Dix said at a briefing Friday.

The federal government expects an increasing number of requests for aid to shore up ailing provincial health systems in the coming weeks.

Duclos issued a "kind warning, but a clear warning," to provinces that they should act now to preserve their hospital capacity.

"If they don't act sufficiently it's going to be difficult for the federal government to help after, because we don't have the capacity to do so," he said.

Public health measures, including lockdowns in some areas, will be important as pressure on health-care workers reaches a breaking point, he said.

Some public health experts have urged Health Canada to speed up the approval of the Merck and Pfizer antiviral drugs for COVID-19 on an emergency basis. Duclos said only that he will have more to say about the department’s assessment of those treatments “in the coming weeks.”

Tam suggested Canadians should limit in-person contacts to immediate household members as much as possible.

"But despite feeling tired, we should have a sense of achievement for the ground we have covered so far, for staying on track and knowing we can still draw strength from each other to get where we need to go."

— With files from Dean Bennett and Stephanie Taylor