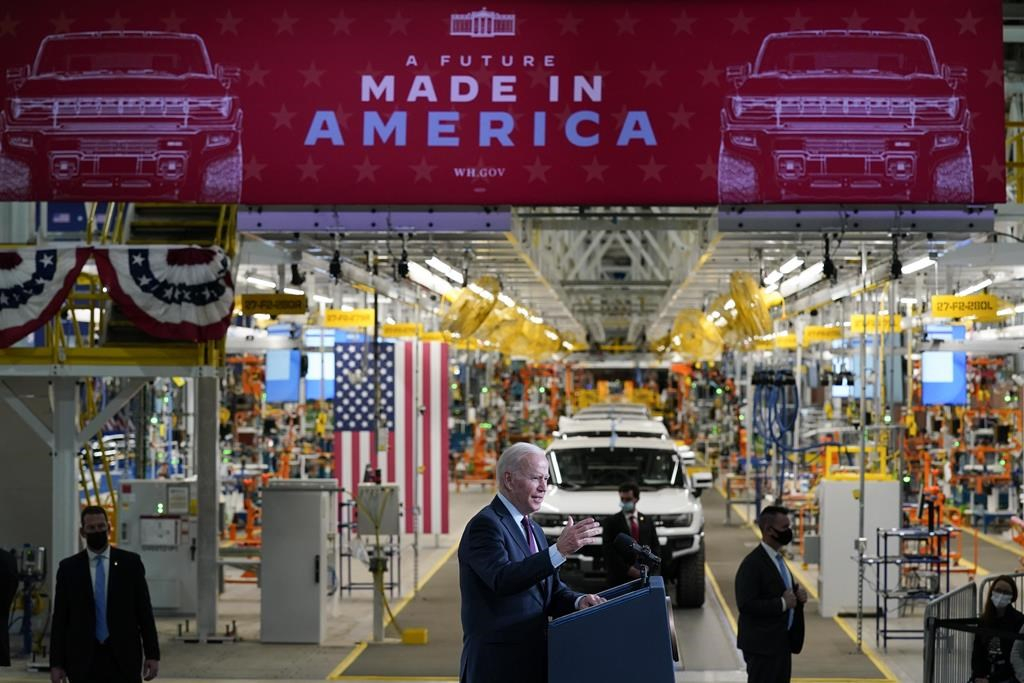 From its arid desert climate to its mercurial, centre-right politics, the southern border state of Arizona hardly seems to have much in common with Canada beyond winter-wary snowbirds.

But President Joe Biden's controversial plan to use protectionist tax incentives to promote U.S.-made electric vehicles, which threatens misery for the Canadian auto sector, is making for all kinds of strange bedfellows.

With its proximity to both Silicon Valley and the U.S.-Mexico border, without the high taxes and regulation of tech-savvy neighbour California, the Grand Canyon State is striving to play host to the looming EV revolution — a vision endangered by Biden's scheme.

"We're going to be one of the next hubs in the United States for next-generation electric-vehicle manufacturing," said Chris Camacho, president and CEO of the Greater Phoenix Economic Council.

"We just want, from a federal policy standpoint, a fair and balanced approach so that consumers can buy the products that they want. Whether they're produced in states like Arizona or other states across the country, we think prudent policy to induce consumer behaviour should be done fairly."

Arizona is far from the only state opposed to the measure, which if passed would allow would-be electric vehicle buyers to enjoy tax credits worth up to $12,500 provided their preferred car or truck was assembled in the U.S. and built with union labour.

Sanders, for his part, is taking little comfort in the fact that Biden's Build Back Better bill, the $1.75-trillion climate and social spending package containing the tax credits, suffered a setback before Christmas when renegade Democrat Sen. Joe Manchin declared he would not support it.

"What you learn early on is nothing's ever dead," Sanders, himself a veteran of public-policy debates within government at the state-legislature level, said in an interview.

"If we can bring in Canada into this, obviously our friends from Mexico and then our congressional delegation, that starts to at least raise the concern that we have that this isn't necessarily the right way to go."

Along with up-and-coming EV players like Rivian, Nikola and ElectraMecchanica, Arizona is attracting parts and manufacturing service suppliers as well — including Jomi Engineering Group, based in Barrie, Ont., which by mid-year will have some 120 employees at its new facility in Casa Grande, just south of Phoenix.

"You can't fight it," Jomi founder and president Michael Hoy said of the growing EV sector's gravitational pull towards the southern U.S.

"(We) couldn't build the Canadian operation any more; we would have probably never had the opportunity as we do, or get competitive enough, if we didn't move closer to our customers."

In October, Arizona Gov. Doug Ducey was among 11 Republican state governors who wrote to congressional leaders denouncing Biden's plan as an unfair use of taxpayer dollars.

"We cannot support any proposal that creates a discriminatory environment in our states by punishing autoworkers and car companies because the workers in their plants chose not to unionize," the letter says.

"Congress should not enact proposals that favour vehicles produced by one workforce over another, particularly when doing so dramatically limits consumer choice and undermines larger carbon emission reduction goals."

In the 50-50 Senate, West Virginia's Manchin has been the focus of will-he, won't-he speculation about his support for Build Back Better. Less attention has been paid to an equally unpredictable Democratic colleague, Sen. Krysten Sinema, whose moderate-conservative politics nicely encapsulate the purple state she represents: Arizona.

As a right-to-work state — by law, would-be employees can't be required to join a union — with a vested interest in a robust and growing EV industry, Arizona is focused only on doing away with the $4,500 portion of the tax credits that are focused on American-assembled, union-built vehicles.

"That should make them almost the optimum ally," said Roy Norton, a former senior diplomat who did two stints at the Canadian Embassy in the 1990s and 2000s before becoming diplomat-in-residence at the Balsillie School of International Affairs in Waterloo, Ont.

Officials in Ottawa confirm that Arizona's congressional delegation, and Sinema's office in particular, continue to be a focus of the federal government's lobbying efforts, which peaked late last year with D.C. visits by multiple emissaries, including Prime Minister Justin Trudeau.

Biden, however, makes no secret of his affinity for blue-collar union workers, nor his ultimate goal of restoring the former lustre of the once-mighty U.S. manufacturing sector. Both, along with reducing carbon emissions, are the principal goals of a tax credit scheme the White House says is close to his heart.

Though he didn't mention EV tax credits specifically, Biden himself signalled strongly Friday that he hasn't given up on the Build Back Better bill, which is likely to return to the fore at some point in the coming weeks or months.

Whether it will continue to include the tax credits, or if the EV vision emerges in a different form, remains an open question.

Responding to the latest jobs report in the U.S., the president reiterated Friday his vision of a resurgent American manufacturing sector, fuelled by an economy that grows "from the bottom up and the middle out."

"From Day 1, my economic agenda has been different. It's about taking a fundamentally new approach to our economy — one that sees the prosperity of working families as a solution, not the problem," he said.

"Let's make what we're selling in America made in America, so we're not at risk of foreign supply chains and shipping delays."

This report by The Canadian Press was first published Jan. 9, 2022.