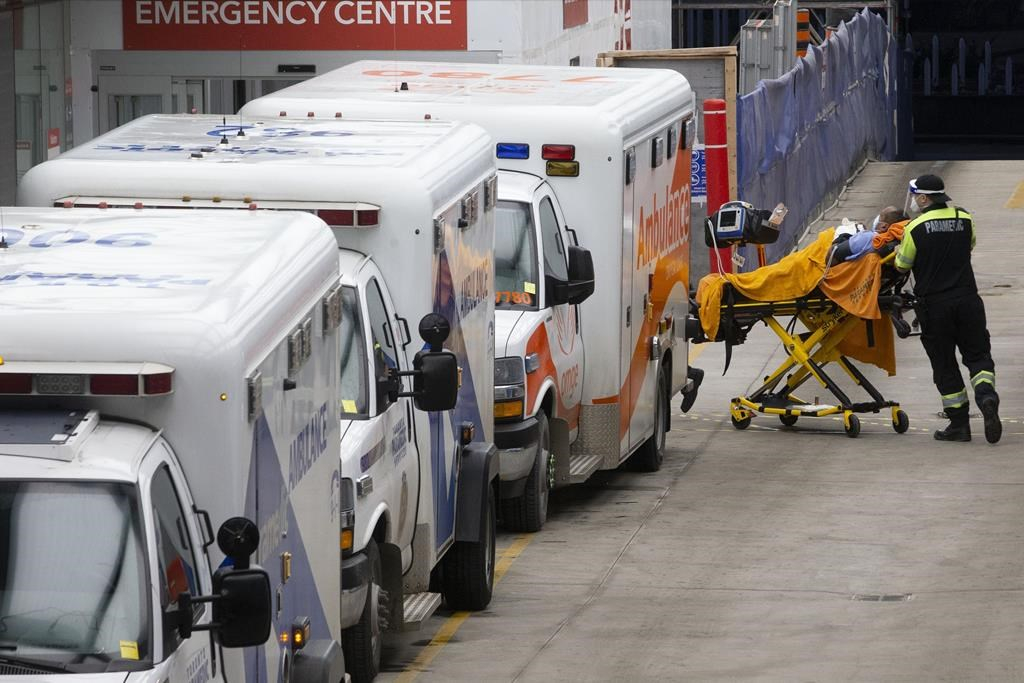 Paramedics wheel a patient past ambulances outside a hospital in Toronto on Wednesday, January 5, 2022. File photo by The Canadian Press/Chris Young
Previous story
Next story

Children in Alberta and British Columbia returned to the classroom Monday as surging COVID-19 cases threatened to overwhelm hospitals in several provinces and prompted the United States to advise its citizens to "avoid travel" to Canada.

The province also reported 26 more deaths from the disease, and 10,573 new COVID-19 infections, although PCR tests are reserved for certain high-risk groups. Quebec said nearly 20 per cent of tests came back positive.

Quebec also opened up appointments for third doses of the COVID-19 vaccine to those aged 40 and older, as the province prepares to expand eligibility to all adults aged 18 and up next week.

In Ontario, there were 2,467 people hospitalized with COVID-19, including 438 patients in intensive care, Health Minister Christine Elliott said, noting that not all hospitals report data from the weekend.

The province reported 9,706 new COVID-19 cases, but Public Health Ontario has qualified that this may be an undercount because of a policy making tests less accessible. The illness claimed 12 more lives, provincial officials said.

The rampant spread of the Omicron variant has stoked alarm across the border, where the U.S. Centers for Disease Control and Prevention issued a fresh Level 4 "avoid travel" advisory for Canada, citing a "very high" level of COVID-19 in the country and urging anyone who must go to be fully vaccinated.

That quickly prompted the State Department to revise its travel advisory, which had been at Level 3, "reconsider travel," to upgrade its advice to Level 4: "Do not travel to Canada due to COVID-19."

In mid-December, the Canadian government issued its own advisory, warning residents against all non-essential international travel due to Omicron.

Prime Minister Justin Trudeau spoke with provincial and territorial leaders on Monday afternoon to discuss the mounting health crisis posed by the variant.

Ontario Premier Doug Ford planned to raise the provinces' plea for more health-care funds with the prime minister, asking Ottawa to increase its annual share of spending from 22 per cent to 35 per cent, to about $71 billion.

The federal government has committed to a 4.8 per cent increase, bringing the total for 2022-23 to about $45 billion.

A federal official said Trudeau assured premiers that the federal government will do all it can to help provinces and territories cope with the surge.

He assured them that there are enough vaccine doses available for all eligible Canadians to receive third booster shots, as well as for children. And he reiterated that 140 million rapid tests will be delivered to them this month, although he offered no specific schedule.

The official, who spoke on background, said Trudeau also emphasized the need to promote support programs, such as the federal wage subsidy, to help individuals and businesses survive the latest lockdowns and public health restrictions.

Many provinces have delayed the return to in-person schooling as part of renewed efforts to rein in soaring case counts.

But the two westernmost provinces moved ahead with reopening classrooms on Monday, with officials arguing virtual learning presents its own risks to youth mental health.

British Columbia's top doctor has said the return to school is "essential" for the emotional, physical and intellectual well-being of children, and told parents that safety measures have been put in place to mitigate the risks posed by Omicron.

Dr. Bonnie Henry acknowledged Friday that some families may feel uneasy about the move, but maintained that students are safer in the classroom than in some of the "unstructured settings that children are in outside of the school environment."

While some parents in Alberta said they're relieved that students in kindergarten to Grade 12 are returning to classes after an extended holiday break, many said they were concerned and frustrated about unclear instructions from the provincial government on how it plans to contain the spread of COVID-19 in classrooms.

The Calgary Board of Education and Edmonton Public Schools said the biggest challenge remains finding consistent staffing as some schools resumed without teachers in classrooms and at least two in Calgary kicked off the winter semester with online learning.

Edmonton Public, the second-largest school district in Alberta with more than 105,000 students, said there were 454 teachers and 252 educational assistants absent Monday.

Alberta also announced Monday that in order to make sure high-risk cases get timely results from PCR tests, only those in high-risk situations will get them, including continuing care residents and front-line health-care workers.

The province reported 17,000 new cases of COVID-19 over the last three days and has 635 people in hospital with the virus.

Manitoba saw the number of patients in hospital with COVID-19 climb to 378, up 81 from Friday, including 38 people in intensive care. The province also reported 19 virus-related deaths.

In Newfoundland and Labrador, a swell of COVID-19 infections has overwhelmed its testing capacities in the past two weeks, forcing officials to send more than 6,635 swabs to labs in Winnipeg and Toronto between Dec. 29 and Jan. 6, said Health Minister John Haggie, who is recovering from the illness.

In addition to the 680 positive tests analyzed in outside labs, health officials said 455 new cases have been detected since Sunday, for a total of 1,135 cases reported Monday.

— With files from Paola Loriggio in Toronto and James McCarten in Washington.