Wildfires are digging carbon sinkholes in the Arctic 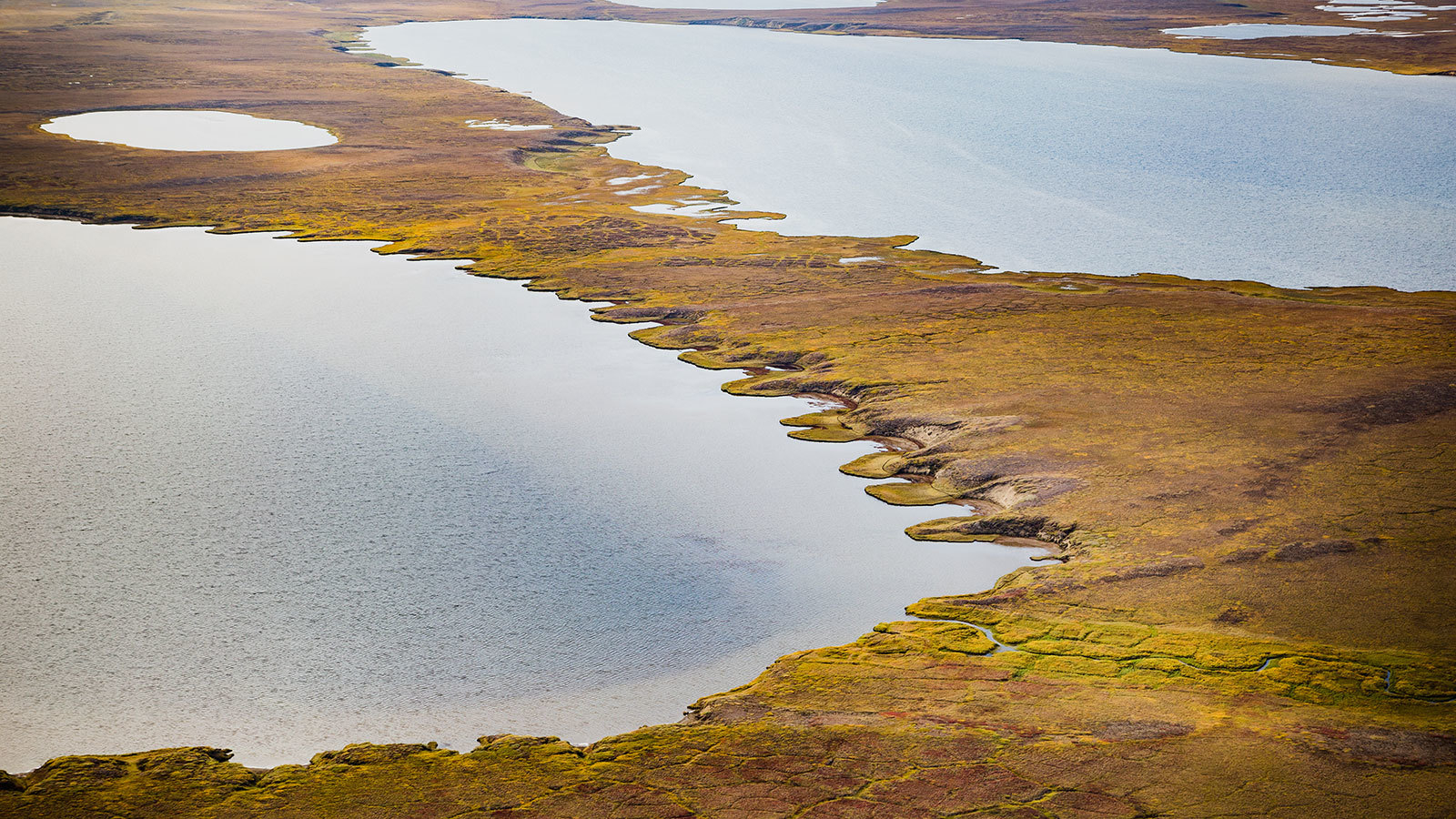 A perfect storm is ravaging the Arctic — literally. As the world warms, more lightning systems are igniting more peat fires. They burn through ancient buried plant material and release great plumes of greenhouse gases, which further warm the planet. At the same time, as plant species march north thanks to a more hospitable climate, the Arctic is greening. That darkens the landscape and absorbs more of the sun’s energy, further heating the region. It also provides more fuel to burn; dried plants above ground ignite more readily than permafrost, which is made from frozen dirt or sand or gravel mixed with dead plants.

But permafrost is now thawing so rapidly that it’s creating massive sinkholes in the earth, up to 100 feet wide and 10 feet deep, a process known as thermokarst.

New research shows how wildfires are exacerbating this land-gouging in north Alaska. After analyzing satellite and aircraft imagery going back to the 1950s, scientists calculated that thermokarst formation has accelerated by 60 per cent since then. In the past 70 years, wildfires have burned three per cent of the landscape but are responsible for 10 per cent of thermokarst formation.

“We found that after wildfire activity, the rate in which thermokarst occurs on the landscape is higher for upwards of eight decades,” says plant biologist Mark Lara of the University of Illinois at Urbana-Champaign, coauthor of a paper describing the research published in December in the journal One Earth.

The cratering creates pits of melted ice and organic matter, which absorb far more solar energy than snow. “If you follow those pits over years to decades, they start to grow and keep growing and getting larger and larger and larger over time. And they all stemmed from that initial small depression after a fire disturbed the tundra,” he continues.

Tundra brings to mind desolation, but this region is in fact packed with life. There aren’t tall trees, but there are lots of grasses and shrubs. These typically trap a layer of snow on the ground; the snow insulates the earth by bouncing the sun’s energy back into space. This encourages the growth and persistence of permafrost, which can sequester thousands of years’ worth of carbon.

But that insulation is being undone by climate change, which is heating the Arctic four times as fast as the rest of the planet.

“In an undisturbed tundra ecosystem, permafrost is protected by the overlying vegetation and soil organic layers from warming climate,” says climate scientist Yaping Chen of the University of Illinois at Urbana-Champaign, lead author on the new paper. “However, when fire occurs, it kills vegetation and removes the insulating organic layers to allow heat to penetrate downward along the soil profile that melts the permafrost.”

That’s allowing vegetation to dry out more easily and giving it more opportunities to ignite during increasingly frequent lightning storms. (More heat means more hot air rising into the atmosphere, which is how thunderclouds form.) Hotter temperatures due to climate change already trigger the thawing that creates thermokarst, the way an ice cube might melt slowly on your countertop. But a wildfire is like holding a flame to that cube.

To make matters worse, the wildfire darkens the ground by charring it, so it will now heat up even more quickly in the sun. If the landscape is level, a neat pit of melted ice will form and grow, because water also readily absorbs solar radiation. All the vegetation that was previously locked in the ice will also sink to the bottom of the watery pit, darkening it even more.

Permafrost is basically a refrigerator for organic matter — and if it warms and thaws, microbes start to proliferate within it, just as they would on your food if you unplugged your fridge. Only these tundra microbes are chewing through millennia-old organic matter, releasing methane, a greenhouse gas that’s 80 times as potent as carbon dioxide. (If there isn’t standing water in the thawed permafrost and the plant material is drier, the microbes will release CO2 instead, but that’s less likely because the craters tend to create little ponds.)

“With thermokarst, you expose deeper and deeper layers of permafrost to the thawing, much more efficiently than without thermokarst,” says University of Alaska Fairbanks permafrost geophysicist Vladimir Romanovsky, who wasn’t involved in the work. “The thermokarst process can turn a surface which was relatively dry into some sort of wetland, and wetlands are producers of methane.”

New Arctic lakes could soon be a major source of atmospheric methane.

New vegetation grows in the pit, and when it dies it rots in this soggy environment, also producing planet-warming gases. So a landscape that was once fairly dry, with carbon locked in the ground, is now much more actively belching emissions. A gradual permafrost thaw would have done this slowly, but the creation of thermokarst kicks the process into overdrive.

At the moment, climate models just aren’t equipped to consider such complexity. “Presently, most studies — especially modelling works — are focused on gradual permafrost thaw, which releases carbon from ground surface,” says Chen. “However, thermokarst formation will expose ancient carbon deep in the soil column to active decomposition. Once initiated, the carbon loss from these horizons may never recover.”

According to one study from a separate international team of scientists, without taking this kind of abrupt thaw into account, scientists may be underestimating the climate effect of thawing permafrost by 50 per cent.

Across the Arctic, hotter temperatures are already pockmarking landscapes with thermokarst pits, but climate change is also changing the wildfire “regime,” or the way that blazes start and behave. Hotter temperatures create more dry fuel, which allows for fires to become bigger and more intense, and therefore more destructive to the ecosystem and underlying permafrost. And while the team’s modelling only looked at northern Alaska, Lara says that this tundra system is similar to others around the world, particularly in Siberia.

“That region is just being lit up and really, really heavily disturbed by wildfire,” says Lara. “A lot of the implications for the amount of thermokarst could be applicable to what they're seeing over there as well.”

“It's really an upending of a system,” Lara adds. “It's pretty crazy how fast things are changing.”