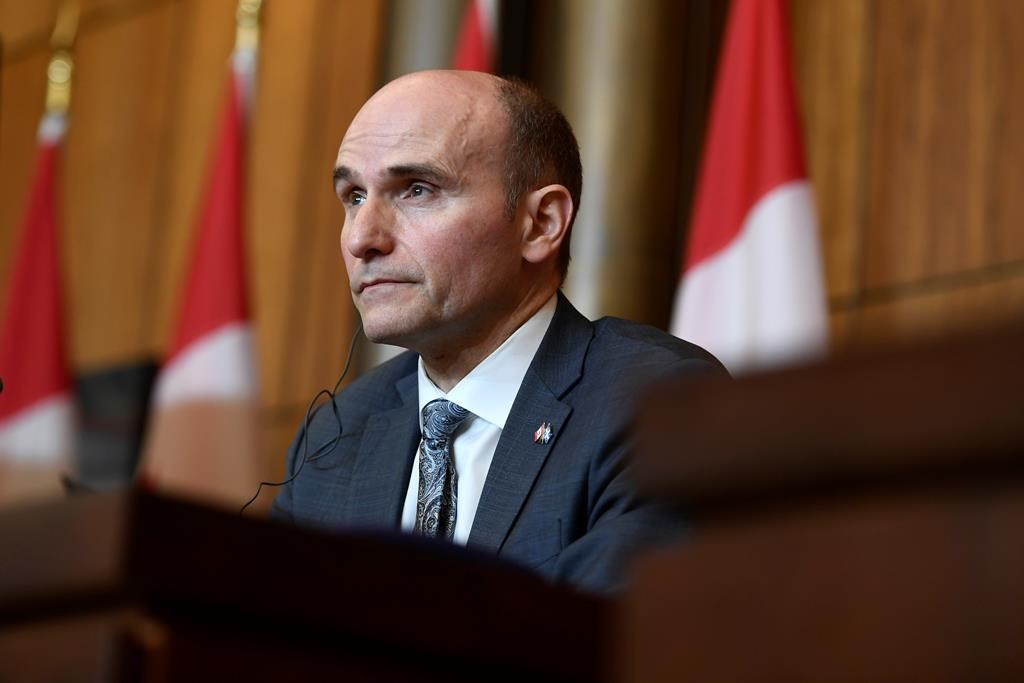 Minister of Health Jean-Yves Duclos participates in a news conference on the COVID-19 pandemic in Ottawa on Friday, Jan. 7, 2022. File photo by The Canadian Press/Justin Tang
Previous story
Next story

The House of Commons ethics committee is calling on the health minister to explain the Public Health Agency of Canada’s collection of data from millions of mobile phones to understand travel patterns during the COVID-19 pandemic.

Opposition MPs on the committee fear the pandemic is being used to undermine the privacy of Canadians who were not aware that a government agency has been collecting mobile-phone data.

During an emergency meeting Thursday, the committee of MPs passed a motion asking Jean-Yves Duclos and Canada's chief public health officer, Dr. Theresa Tam, to appear before it to answer questions on the policy.

The House is still on its winter break but four opposition MPs on the committee asked for an emergency session after the Public Health Agency published a notice indicating it plans to extend the data-collection practice.

Conservative, Bloc Québécois and NDP MPs on the committee have raised concerns about the privacy implications of the policy.

In December, the Public Health Agency issued a new request for proposals to track countrywide cell tower-based location data between Jan. 1, 2019 and May 31, 2023.

The notice says the data must be accurate, accessible and timely, as well as ensuring privacy and transparency. It must be stripped of all identifying information.

The request for proposals had been due to end before MPs returned to Parliament after their winter break but has now been extended until Feb. 4, said John Brassard, Conservative ethics spokesman and a member of the committee.

Brassard has said the collection of data by the Public Health Agency raises numerous "red flags" about privacy.

Addressing the committee on Thursday, he said the Public Health Agency had been "collecting data without the knowledge of Canadians, effectively doing it in secret."

"We need to know what security measures were in place to protect the privacy rights of Canadians," he said.

The Public Health Agency said in a statement that it had informed the privacy commissioner about the process, and has been advised by its own privacy and ethics experts too.

"Minister Duclos has also been in communication with the Office of the Privacy Commissioner and has underlined PHAC’s ongoing commitment to protecting and preserving the privacy of citizens and people in Canada while ensuring that Canada has the data needed to understand and inform our ongoing response to the COVID-19 pandemic," the statement said.

Greg Fergus, a Liberal member of the privacy committee, said that all members of the committee agree it is "important to protect Canadians' privacy rights."

But he said that the information was aggregate data which had been "depersonalized so there is no information that can identify individuals."

"It is unfair to say that we are tracking Canadians. That is not at all the case," Fergus told the committee. "When we request depersonalized data that cannot identify a person it is simply data."

The Public Health Agency said that "by analyzing population movement data, we can better understand the public’s responsiveness to public-health directives."

It said that in December 2020, it established a "sole-source contract" with a telecom operator which expired in October 2021.

"PHAC is now launching a request for proposal process as a means to continue the collection of this data through an open and transparent process," it said in a statement.

Brassard last week wrote to the privacy commissioner, Daniel Therrien, to ask him to investigate the matter.

In a statement, the commissioner's office said it had not opened a formal investigation. But it said, after receiving complaints alleging violations of privacy, it would "turn our attention to the means chosen to deidentify the data mobility information."

In 2020, the commissioner's office published a document about privacy and initiatives in response to COVID-19 which cautioned institutions to be aware of the risk of reidentifying anonymized information.

The government did not ask the commissioner for specific advice about whether there were "adequate safeguards against reidentification," it said.

"The government relied on other experts to that end, which is their prerogative," the commissioner's office said.