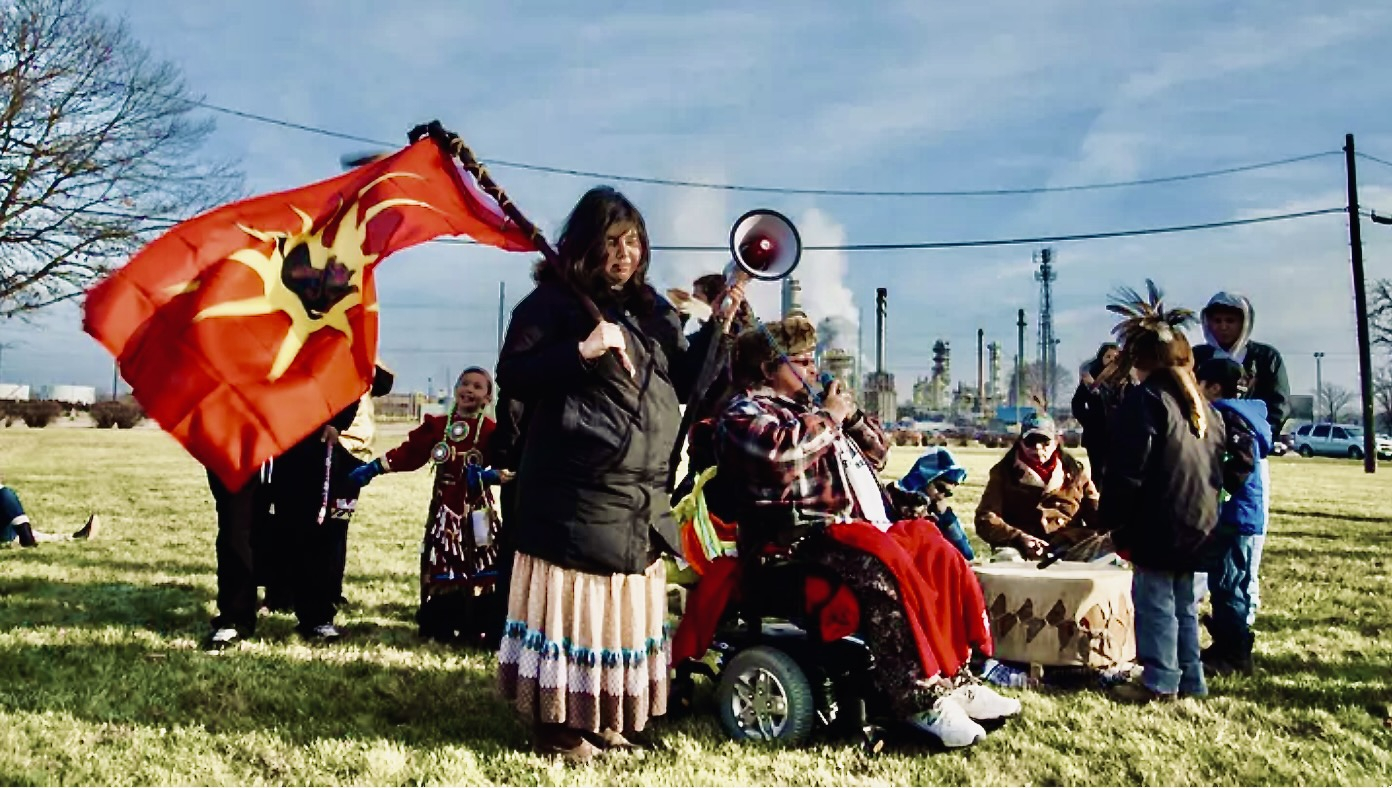 Vanessa Gray has a history of standing up against environmental racism. Photo via Gray's GoFundMe page
Previous story

Young land defender Vanessa Gray made a virtual appearance in an Ontario court on Wednesday, with her supporters quickly blocked from displaying their messages that a string of charges against her should be dropped.

Gray, from the Aamjiwnaang First Nation near Sarnia, was detained soon after a solidarity action in Toronto on Nov. 21 — the only one charged in relation to the blocking of a freight railway line in support of the Wet’suwet’en First Nation, whose hereditary chiefs oppose the construction of a pipeline in their unceded territory in northern B.C.

Gray is a well-known environmental activist focused primarily on pollution and its harmful effects in Ontario’s Chemical Valley, which sits on Aamjiwnaang territory and is the largest complex of petrochemical facilities in Canada.

She and her supporters say the charges fit a pattern of seeking to silence Indigenous land defenders and suppress Indigenous organizing.

“The targeting of Gray is part of a larger pattern of colonial violence in which the Canadian state collaborates with corporations to criminalize Indigenous Land Defenders for the sake of industry interests,” the Mining Injustice Solidarity Network activist group said soon after the charges were laid.

Members of the group and others tried to attend the virtual hearing using the name "Drop the Charges" but were quickly told that to join the video conference they would have to turn on their cameras to confirm their identities to the judge.

During the proceedings, the judge agreed to remove certain release conditions initially imposed on Gray, including that she not go on Canadian Pacific Railway property.

The first court date to hear the case has been scheduled for Feb. 9.

On a website where she has raised her goal of $10,000 to cover legal costs, Gray said was wrongly charged with three counts of mischief, interference with property, causing a disturbance, loitering, unlawful assembly, trespassing, and failure to give way.

“Education and understanding our interconnected struggles is essential to our ever-growing movement, but we must take risks for a sustainable and just future," she writes on the fundraising site.

Some of those detained allege they were treated in a demeaning way, transported in enclosures about the size of a dog kennel and forced to appear before a judge in their long underwear and in shackles.

That was just the latest salvo in a years-long dispute, with earlier RCMP interventions leading to extensive solidarity actions that threw rail transportation into chaos across the country in the months before the arrival of COVID-19.

It is shameful how Canada and

It is shameful how Canada and British Columbia are treating Indigenous rights and our forests.
So much for reconciliation and for climate change with the federal Liberals and BC governments.

I keep forgetting that just

I keep forgetting that just because we know it is wrong and should stop, the power behind keeping the status quo of power as it is, rolls on as if it were still 1880, which in most meaningful ways it is.
Judges are appointed in accordance with their probably "right attitude " and political views that dont even need to be stated out loud but are solidly a willingness to uphold the powerful as they are now and punish anyone who dares to challenge it.
The least powerful get punished first, hence, a native woman singled out of thousand of protesters. no suburban middle class white moms with kids in strollers blocking the CN tracks in court here boys!!!!
It turns my stomach. Numbers of protesters is the only way to fight back.
Reinstating the Fairy Creek injunction is perhaps the most breathtakingly egregious move today in the country. No big rig trucker freedom for those defending trees by god!!!

The "big rig trucker" mentality is in stark contrast to the Indigenous land defenders. The Big Riggers have been overtaken by the anti-vaxxers and the motley crew of anti-government mmilitias imported from south of the border. Truckers are a truculent lot and very apt to be suspicious of regulations, laws and constraints on their "freedom". Bulldozing down the tax paid highways gives them an unwarranted and inflated sense of their own importance and power. Nary a word from them about their responsibilities. Which is why all these arrested development bully boys are over-running civil behaviour. Talk about entitled privilege...

It is interesting to inquire about why so few of the younger generation want to be truckers, why the average age of truckers is edging toward retirement territory. Who/what is responsible? The truckers themselves? Their employers? The predatory parasites who thieve and wreck and endanger drivers on every road?