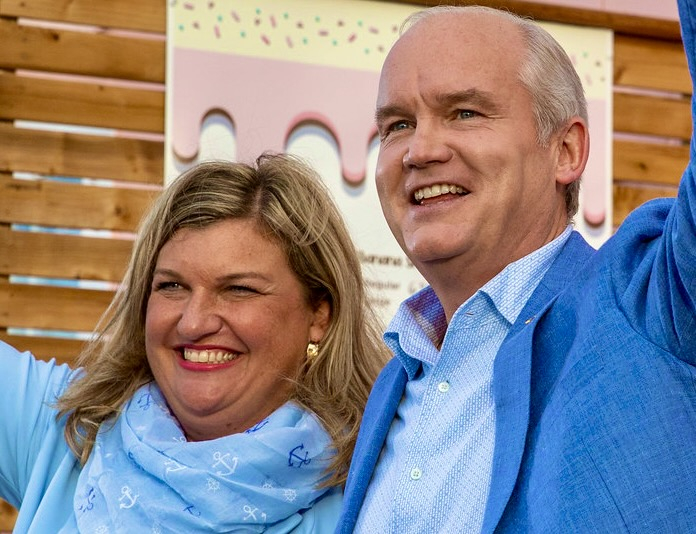 Erin O'Toole was ousted from his role as leader of the Conservative Party of Canada by secret ballot on Wednesday. Photo via Erin O'Toole / Flickr (CC0 1.0)
Previous story
Next story

Erin O’Toole’s fall from grace within the Conservative Party of Canada was no surprise, but the speed and brutality of his ousting jarred even seasoned political scientists.

Uniting the deeply divided party is no easy task, but O’Toole ushered in his own demise by neglecting his backbenchers and pushing the party towards the centre, says Richard Johnston, a professor of political science at the University of British Columbia.

On Wednesday, O’Toole lost a caucus vote to remain party leader after roughly one-third of his MPs signed a notice to trigger the leadership review.

Of the 118 MPs who took part in the secret ballot, 73 voted to replace O’Toole while 45 endorsed him, according to Ontario MP and national caucus chair Scott Reid, who did not cast a ballot.

Canada’s National Observer reached out to all 13 Conservative MPs in B.C. and several Alberta MPs but only received statements from three.

O’Toole’s ousting was no surprise to Johnston.

“He was bleeding support,” said Johnston. “This is the most brutal ousting and the most sudden, ever.”

Johnston said the party’s situation was “pretty dire all along,” but the catalyst seemed to come when he fast-tracked a government bill to ban conversion therapy in Canada and “silenced a significant number of his backbenchers.”

One such backbencher is Alberta MP Garnett Genuis, who recently confirmed he signed the letter seeking the early leadership review.

Very sad to see @erinotoole launching more false personal attacks against members of his own team. Statement below. #cdnpoli pic.twitter.com/wxI5xWMPap

Because O’Toole ran for leadership from the right and then led closer to the centre, he betrayed the trust of many in his party, said Johnston. Arguably, a more inclusive approach is important to win elections, he says, but there is a “delicate balance” to be struck, and O’Toole missed the mark.

Political scientists are not surprised @erinotoole was voted out as party leader this afternoon, and say one key mistake was silencing a significant number of his backbencher MPs on issues like conversion therapy. #cdnpoli #otoole #conservatives

Whoever the party’s next leader is “has to figure out how to speak to the backbenches in a way that is serious and realistic, without being condescending or dismissive,” he said.

BC MP Mel Arnold released a statement on the end to O’Toole’s leadership, thanking him for his service and cautioning that: “Discussions and critiques of our party’s leadership have recently become very public, causing distraction from the important work that my Conservative colleagues and I must be focused on.”

Because it was a secret ballot, BC MP Brad Vis declined to say how he voted in a statement thanking O’Toole for his leadership over the past 18 months.

Tonight, the party will elect an interim leader.

South Surrey-White Rock MP Kerry-Lynne Findlay is throwing her name in the ring for interim leader, along with New Brunswick MPs John Williamson and Rob Moore

I want to thank @erinotoole, Rebecca, and family for their service to Canada over many years and for the sacrifices they made. I have put my name forward for Interim Leader and I wish all those doing the same well. pic.twitter.com/E7Rvn1yxfq

O'Toole also hurt his image within the party when he pledged carbon pricing would be scrapped during the leadership race, only to end up embracing it down the line — despite the fact that some of his MPs, including many in Western Canada, fought for years against the Liberal government's carbon-pricing mechanism, which the Conservatives called a "carbon tax."

In the fall, he also amended party policy to say that, if elected, a Conservative government would keep the Liberal gun restrictions and complete a review of those rules, a move which also caused some friction.

In a statement, BC MP Todd Doherty said he looks forward to “reconnecting with our grassroots members and my colleagues across the country to determine our best path forward,” and added: “Whenever the next election is called, Canadians can rest assured that Conservatives will be ready to take Justin Trudeau on and win.”

It's beyond satisfying to

It's beyond satisfying to watch these fools blithely dismantling Harper's tenuous coalition. At the time, he convinced them that as long as they shut up about their "beliefs" (he was firm about abortion not being on the agenda for example), power could be theirs. Only then could they work on ushering in the change that they sought, albeit through the back door; he gave himself, and the heart of the "Reform" conservatives away by being the first PM to say "God Bless Canada." In keeping with the American style, his coalition was also the first political party to use nasty attack ads, and the outright deceit of "robocalls" was shocking too. Conservative "tactics" are so despicable and nasty that it's always been hard to square that with what the creed of Christianity espouses until you look at how religion has been used throughout history as a tool to manipulate and control the masses, proof that whatever else it purports to be, it's also openly about raw power, and so is essentially political. And let's face it, that and the basic idea that some "god" actually exists anywhere other than in people's heads is actually the very definition of an "extreme" idea, but because this belief is "the love that dare not speak its name" in our ostensibly secular society, conservatives have been living a lie.
So if the "social conservatives" (read religious) are now rising up as they have apparently done with the conversion therapy issue, it sounds like they're no longer willing to quietly occupy the back benches, pretending to be "moderate," they want to be loud and proud on centre stage. They know to still soft-pedal it with the usual trojan horses, the economy being the principle one, but they want their creed in power. It does line up with the proxy power represented by their omniscient, all-powerful "God" after all, ruler of the entire universe, solid proof that the whole idea came from men btw. It also means NO to a whole host of basic issues that the majority of Canadian society has long ago accepted. So no wonder there's so much sucking and blowing going on with these guys the last 20 years.....

And neoliberalism fits in

And neoliberalism fits in perfectly with the right wing subterfuge around religion by also hiding in plain sight, and not exactly naming what you're shooting for.
Because it sounds like another conspiracy theory as well, so can easily be dismissed, we also know the saying that just because you're paranoid doesn't mean they're NOT out to get you.