Is Putin’s invasion of Ukraine about fossil fuels? 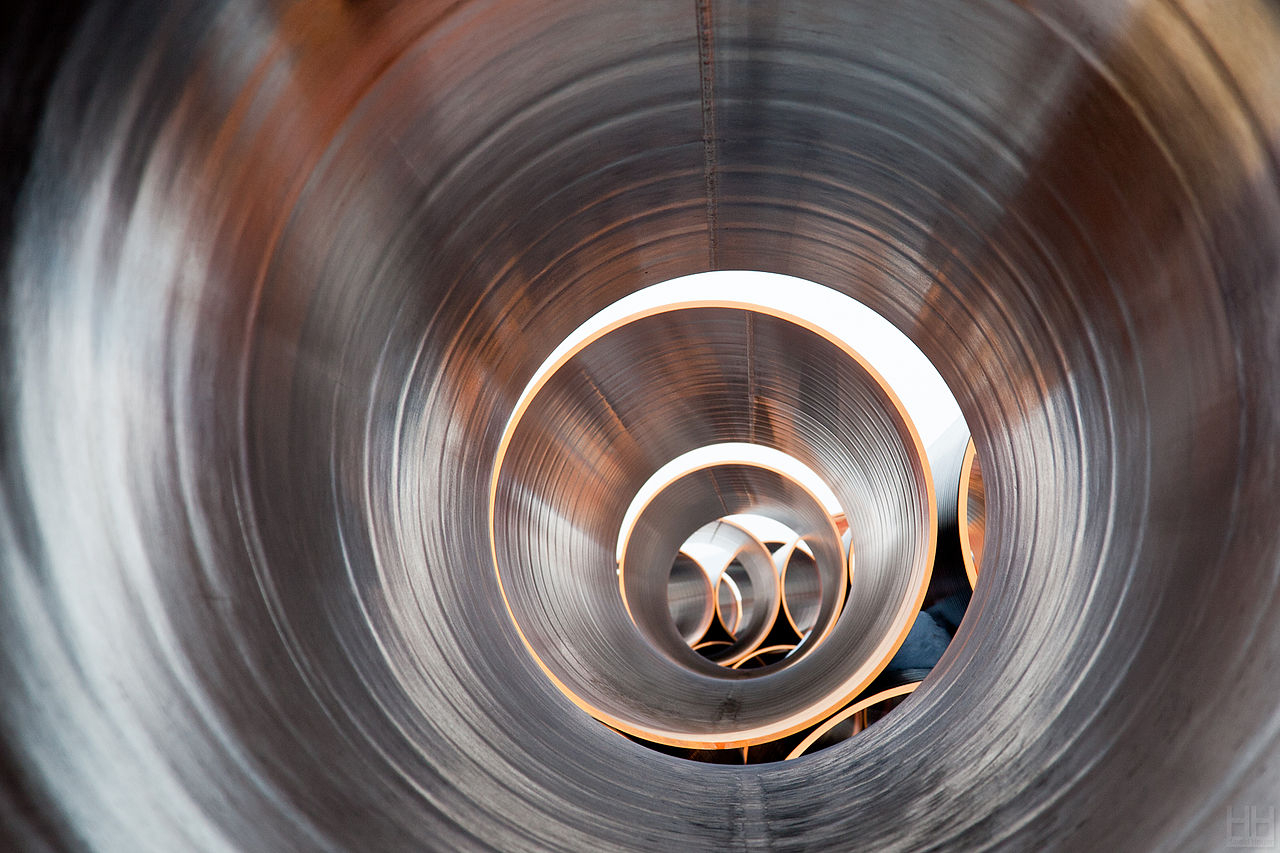 Pipes for a natural gas pipeline that will connect Russia and Germany. Olaf Scholz has stopped the Nord Stream 2 project in response to Russian aggression in Ukraine. Photo by Harald Hoyer from Schwerin, Germany / Wikimedia Commons (CC BY-SA 2.0)
Previous story

What is the relationship between Russia’s threats to Ukraine and the gas price crisis?

Gas prices are soaring globally largely because of the resurgence of demand for fossil fuels after the COVID-19 pandemic and lockdowns depleted storage and the difficulty of ramping up supply after the disruptions of the past two years. But prices have also been significantly affected by Russia’s recent decision to tighten gas supplies to Europe, which experts believe was driven by Vladimir Putin’s desire to move against Ukraine.

Europe is dependent on Russia for about 40 per cent of its natural gas supplies, and despite the expansion of renewable energy over the past two decades, that dependency is increasing as countries shift to gas, away from dirtier coal. Germany is particularly vulnerable, as it has shut down nearly all of its nuclear power stations and aims to eliminate coal by 2030.

A major new gas pipeline, Gazprom’s $11-billion Nord Stream 2 from Russia across the Baltic to Germany, which would heat 26 million German homes, has been the focus of Germany’s diplomatic relations with Russia since it was announced in 2015. Construction on the 1,200-kilometre pipeline was completed last year, but no gas has yet flowed and its future is now in doubt as Germany’s chancellor Olaf Scholz dramatically halted approval for the project last week.

Step by step, pipe by pipe the Pioneering Spirit is laying the Nord Stream 2 Pipeline on the Baltic seabed pic.twitter.com/IaO63xz6Pz

Concerns that Russia is using its gas supplies as a weapon to achieve its political aims are well-founded. Fatih Birol, executive director of the International Energy Agency, noted that Russia’s decision to drop gas supplies to Europe by a quarter came as it was heightening tension towards Ukraine. “I hope this was only a coincidence,” he told The Guardian.

Is this really another war over fossil fuels?

No. Energy resources are not the focus of this threatened conflict. Vladimir Putin has a long history of territorial ambitions in former Soviet nations, which he made explicit last week, and of attempts to exert political control over Ukraine. Putin is said by supporters to be concerned over the possibility of NATO expansion, although many analysts say this is a pretext.

The continent has grown over-reliant on Russian gas — but Putin knows he is vulnerable to Europe cleaning up its energy sector. #UkraineRussia #UkraineInvasion #FossilFuels

So the Ukraine crisis is not a war over resources, but it has many implications for resource use. Russia is effectively weaponizing its dominance over European gas supply for political ends. Reducing reliance on Russian gas is an urgent necessity for the EU to reach net-zero emissions, and would also diminish Putin’s political leverage over the EU.

It is also worth noting that in the longer term, as Europe weans itself off gas and pursues net-zero emissions, the value of this political weapon will wane rapidly. Russia’s industries have never recovered from the fall of communism, and its economy is now based overwhelmingly on the export of fossil fuels, with much of the rest made up of energy-dependent mineral resources, such as iron, steel, aluminium and other metals, and some agriculture.

Four in 10 roubles accruing to Russia’s federal budget pre-pandemic came from oil and gas, which made up 60 per cent of Russian exports in 2019. Kremlin strategists are therefore keenly aware that in the longer term, the global move to net-zero threatens the whole basis of Russia’s economy and global influence.

Why is Europe so dependent on Russian gas?

Historically, much of Europe was heavily dependent on coal for power and heating. Renewable energy generation has more than doubled since 2004 and reached 22 per cent of final energy production in 2020.

However, at the same time, the share generated from nuclear power has fallen, from about a third of the EU’s electricity in 1995 to about a quarter today. After the accident at Japan’s Fukushima nuclear power plant in 2011, Germany’s then-chancellor Angela Merkel announced an “Energiewende” — an energy shift — that would see all the country’s reactors shut down.

This has increased Germany’s need for gas, and similar moves away from coal and towards lower emissions in other countries —– including the U.K., which despite North Sea gas production is a net importer of gas — have heightened the dependency.

Before the Nord Stream 2 Pipeline makes landfall in Germany, the pipeline is buried in trenches in the Bay of Greifswald. Two 700-m microtunnels make the transition from the underwater section to the landfall. https://t.co/E9aG6rwP6N pic.twitter.com/MHwlgoFku1

The geopolitical implications of this dependency, as well as the climate impacts, are now unignorable. Paul Bledsoe, a former Clinton White House climate adviser now with the Progressive Policy Institute in Washington, D.C., says: “It has taken the current crisis for Germany and the EU to recognize that its co-dependence on Russian gas is a geopolitical and climate nightmare from which they must finally awake. Reducing Russian gas reliance is a huge climate and moral imperative that Europe must prioritize.”

Will Russia turn off gas supplies over sanctions?

That would be a momentous move from Russia. Any further reductions of Russian gas supply to Europe would have severe consequences, for Europe but also for Russia itself. Birol said earlier this month, before sanctions were imposed: “If Russia stops the gas supply to Europe, it could have a seismic impact on European energy. [Russia] has to consider the consequences if existing oil and gas supplies to Europe are halted.”

What impact will Russia’s actions in Ukraine have on climate diplomacy?

Russia was almost invisible at the COP26 UN climate summit in Glasgow last November after a surprising public commitment to reach net-zero greenhouse gas emissions by 2060. But the Kremlin has left the details of the goal vague and shown little sign of updating Russia’s emissions commitments for 2030, which are key to limiting global temperature rises to 1.5 C.

This is a crucial year for climate diplomacy, as the pledges from all countries in Glasgow are still inadequate for the 1.5 C goal, and the U.K. COP26 presidency is hoping for major progress before the next UN climate meeting in Egypt this November. Russia’s stance on Ukraine will certainly have an impact on those discussions, not least as any conflict will focus attention on the move from fossil fuels.

It is also notable that Russia’s oil and gas operations are among the worst in the world for the climate. Data released last week by the IEA shows that emissions of methane, a powerful greenhouse gas and the major component of natural gas, are 70 per cent higher than countries had claimed.

Russia makes little or no attempt to capture methane from its oil and gas drilling and to stop its pipelines leaking, so there are huge opportunities. If Putin were serious about tackling the climate crisis, Russia could provide an invaluable service to the rest of the world by plugging these leaks — reducing methane globally by a third by 2030 could reduce temperatures by 0.2 C — and at current gas prices, this could be done at no net cost and could even be profitable.

Should the U.K. be fracking more or producing more from the North Sea, to reduce dependency on Russian gas?

No. Attempts to frack in the U.K. started more than a decade ago, but went nowhere, in part because of protests but also because the economics of industrial fracking in a densely populated country make it impractical. Any move to restart fracking now would take many years to produce any gas, long after the current gas price crisis has been forgotten.

New licences for oil and gas exploration in the North Sea are also currently under consideration by the government. However, any newly licensed fields would also take years to come into production, so would have no impact on the current crisis.

Bob Ward, policy director at the Grantham Research Institute on Climate Change at the London School of Economics, warns of falling for false solutions: “We know that some opponents of climate policy will try to hide the truth and instead fool the public into falsely believing that the soaring prices are due to green energy. If they are successful, they might slow down the transition to clean domestic energy.”

Far more good could be done in the shorter term by insulating homes and ramping up renewable energy generation.

What is the answer to the crisis?

Rachel Kyte, dean of the Fletcher School at Tufts University in the U.S. and an adviser to the UN secretary general on the climate, says: “The West needs to meet Putin’s flagrant breach of international law with tough sanctions to force a change in calculus in Moscow. Putin believes he has to the largest extent sanction-proofed Russia, but Russia earns hundreds of millions of dollars a day from sales of oil and refined products, and more from sales of gas and minerals.

“Weaning ourselves off these as quickly as possible is one route available to the west. In fact, Putin’s understanding of what decarbonization would mean for Russian energy exports in the medium and long term may be a factor in the timing of Putin’s attack on Ukraine now.”

Ending the use of fossil fuels is imperative, to reach net-zero emissions and stave off the worst impacts of climate breakdown. But the shift will also create geopolitical tensions as the world’s massive fossil fuel exporters — Russia, Saudi Arabia and some other Middle Eastern countries, Latin American oil producers, Australia — begin to lose out economically.

The crisis in Ukraine shows that some fossil fuel producers at least may not want to give up without a struggle the political leverage they gain from their resources.

May I suggest that a large

May I suggest that a large part of the answers to the questions asked in this article are very well represented by some Journalists of sone renown in :
reseauinternational.net
I found the site very instructive in geopolitics, Orient/Occident, NATO, EU, etc.