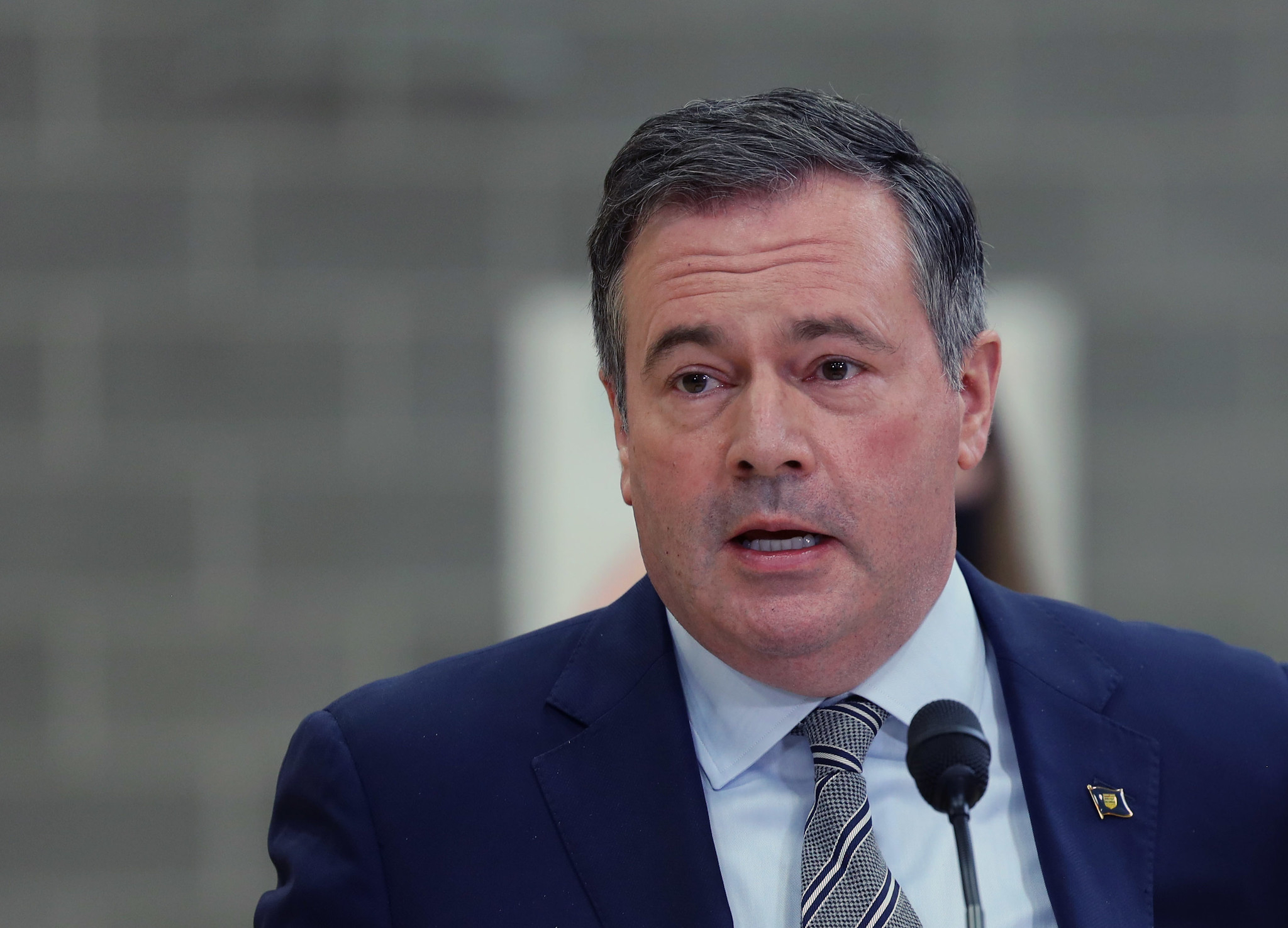 There are few things Jason Kenney loves more than talking about how ethical Alberta’s oil and gas industry is. But when it comes to actually doing something about those ethics, he seems far less interested. Witness the response this week to Russia’s invasion of Ukraine from other oil- and gas-producing regions and the stark contrast between the decisions they’re making and the ones Alberta isn’t.

Norway’s sovereign wealth fund announced it will immediately freeze any new investments in Russia and start divesting the $3.1 billion worth of Russian assets in its portfolio. British Petroleum went a step further, announcing it will unload its stake in Rosneft, the Russian state-owned oil and gas company, at a substantial financial cost. According to Reuters reporters Ron Bousso and Dmitry Zhdannikov, “Rosneft accounts for around half of BP’s oil and gas reserves and a third of its production and divesting the 19.75 per cent stake will result in charges of up to US$25 billion, the British company said, without saying how it plans to extricate itself.”

In Alberta, Kenney has been busy tweeting about “dictator oil” and why dead pipeline projects like Keystone XL and Energy East should be revived. And while it’s impossible to miss the stench of his crass opportunism, there are also some notes of desperation in there if you sniff around a little more. After all, the oil and gas industry Kenney holds up as ethical has some very unethical Russian money in it.

Take Spartan Delta Corp., an Alberta oil and gas company with more than 60,000 barrels per day of production and one very powerful oligarch in its corner. According to Financial Post reporting, Russian billionaire Igor Makarov is — or at least was, as of March 2021 — Spartan’s largest shareholder, with his Switzerland-based ARETI Energy S.A. controlling 21 per cent of the company. Makarov, a former Olympic cyclist, previously founded Itera Oil and Gas Company, which was the largest privately held energy company in Russia until it was sold to Rosneft in 2013.

Makarov is hardly the only Russian oligarch involved in Canada’s oil and gas industry. The more troublesome connection for Kenney might be the one between Evraz PLC — the British-based steel company that’s a key supplier for both the Coastal GasLink pipeline and the Trans Mountain expansion — and the trio of Russians who control it. In 2018, the U.S. Department of the Treasury put Roman Abramovich, Evraz’s controlling shareholder, along with non-executive chairman Aleksandr Abramov and then-CEO Aleksandr Frolov, on its so-called “Putin list” of politicians and oligarchs who had benefited from their ties to the Russian president.

This is still flying under the radar for the most part in Canada, but it’s already big news in the U.K., where Abramovich owns the Premier League’s Chelsea football club. The image of a trio of Russian oligarchs owning the company that’s fabricating the steel for the Coastal GasLink pipeline and Trans Mountain is a very bad look, and it’s one Kenney should be highly attuned to. He knows how important LNG Canada, which depends on CGL for its feedstock, is to Alberta’s oil and gas industry. And he surely understands how this relationship could be used to slow its construction — or stop it entirely.

If Kenney wants to avoid having this blow up in his face, he needs to do more than tweet about pipelines. Yes, he gave a speech in the Alberta legislature calling on the federal government to freeze the assets of Russian oligarchs in Canada, but he did it at the same time reporters were in an embargoed news conference about the budget with provincial Finance Minister Travis Toews. Crucially, he has yet to repeat the message he delivered to the legislature on his social media channels.

Any and all involvement by Russian oligarchs in his province’s ostensibly ethical oil industry is a non-starter, and companies that have benefited from their money should own up to it if it’s still there. The involvement of an oligarch-owned steel company in the Coastal GasLink pipeline should never have been allowed to happen, and it should be rectified as quickly as possible. And if Kenney really wants to be ethical, his UCP should probably return the $4,243 maximum donation in 2021 from Don Archibald, who sits on Spartan Delta’s board of directors.

Oh, and if Alberta’s premier really wants to “defang Putin,” as he said in a recent tweet, then he should forget about new pipelines — which wouldn’t come into service until the end of the decade under even the most optimistic scenarios — and focus on helping Europe and other importing nations get off fossil fuels and onto renewables that Russia doesn’t control.

Alberta’s energy companies could even invest in projects in Europe that increase the continent’s energy security and reduce its carbon footprint. But that would cost real money, not cheap talk.

We should all get together

We should all get together and march on the legislature now. We can't afford another year of the UCP.

While we're at it, Jason

While we're at it, Jason Kenney also has a Saudi problem. And a China problem.
Both nations are invested in Alberta's petroleum industry. Kenney also wants to export oil to China.
"Ethical oil" is an argument of convenience.

Canada's "ethical oil" boosters are remarkably silent on Saudi investment in the oilsands. Saudi Arabia's sovereign wealth fund invested in CNRL and Suncor. (2020)
"Saudi Wealth Fund builds stakes in Canadian oil sands giants" (Bloomberg, 16-May-20)
https://calgaryherald.com/pmn/business-pmn/saudi-wealth-fund-builds-stak...
*
"Saudi Arabia is buying shares of Alberta's oil sands companies. The 'ethical oil' argument is dead." (Macleans, May 19, 2020)
"If Canadian oil & gas companies are going to accept Saudi Arabia's money, it's probably time for their proxies to retire arguments about the immorality of their oil."
https://www.macleans.ca/opinion/saudi-arabia-is-buying-shares-of-alberta...
*
"On Friday, the Globe and Mail reported that the province was in talks with a private firm from Saudi Arabia to build a $5-billion petrochemical facility in Alberta."
"Alberta offers cash in push to become top global petrochemical producer" (2020)
"Conservatives, if elected, would work to restore ties with Saudi Arabia" (CP 2019)
*
People who complain about Saudi oil imports have nothing to say when it comes to selling military vehicles to the Saudis, now waging a murderous war in Yemen. Why is it ethical to sell military vehicles to the Saudis, but unethical to buy their oil?
*
"[Former PM Stephen Harper] says he remains proud of selling $15 billion worth of weapons to Saudi Arabia when he was PM. Never mind that the kingdom is one of the most repressive regimes in the world. Who would boast about selling weapons to a region that is a precarious tinderbox? Jobs here, for repression somewhere else?
"Harper also attended Davos in the Desert, hosted by Prince Mohammed bin Salman, the leader who U.S. intelligence and the UN Special Rapporteur on extrajudicial executions believe was involved in the slaughter of journalist Jamal Khashoggi on Oct. 2, 2018."
"How to Destroy the Conservative Brand" (The Tyee, 25-Nov-21)
https://thetyee.ca/Analysis/2021/11/25/How-To-Destroy-Conservative-Brand/

"Former prime minister Stephen Harper says he's proud of $15-billion arms deal with Riyadh as he prepares to visit Saudi Arabia" (Globe and Mail, Oct 18, 2021)
"Former prime minister Stephen Harper says he remains proud to have negotiated a controversial $15-billion armoured vehicles deal with Saudi Arabia, as he prepares to attend an international investment conference in Riyadh as a guest of the desert kingdom.
"Mr. Harper also expressed pride in the agreement to sell light armoured vehicles to Saudi Arabia. The deal, which Ottawa brokered in 2014, called for the Canadian subsidiary of a U.S. defence contractor, General Dynamics, to supply more than 740 light armoured vehicles (LAVs) to the Saudis. The vehicles were to be equipped with machine guns and anti-tank cannons. The deal faced significant criticism because of Saudi Arabia's poor human-rights record, its role in the war in Yemen and its use of similar vehicles to fight with militants in its Eastern Province.
"'I am also proud this constructive relationship helped secure jobs for Canadians through the largest export manufacturing contract in Canada's history,' Mr. Harper wrote."
https://www.theglobeandmail.com/politics/article-stephen-harper-says-he-...
*
The ethical oil argument is a flop. Not how oil markets work.
Oil markets don't care about ethics. No one fills their tank from the pump marked Ethical Oil. Refiners and car drivers buy the cheapest product that meets their needs.

Trudeau had a choice to

Trudeau had a choice to cancel the contract five years ago. He could have paid the contract breakage penalty to GD as well as continue production of LAVs to the contracted number and placed the vehicles in storage for future use. It's apparent today what could be done with them to help Ukraine.

More shameless potlicking from Kenney in his perpetual race to the bottom. No class, no style, just happily trying to generate a greasy buck from someone else’s misfortune. He just can’t resist himself. Enough already with the ethical oil BS, no one is buying it. What a twittiot.

On this column I agree with

On this column I agree with Max Fawcett.

Jason Kenney should ask the hundreds of thousands of Ukrainian Albertans (including members of my family and several friends) who are direct descendants of Alberta pioneers how they feel about the official welcome for the presence of Putin, Saudi Arabia and China in the Alberta oil patch.

While he's at it, Vivian Krause, author of the completely discredited foreign-environmentalists-are-diddling-us conspiracy theory, should be taken to task for her current breathless support for resurrecting the long dead Energy East pipeline idea to replace imports of foreign oil, an idea which lacks a single drop of analysis of the Russian, Saudi and Chinese monetary content within the steel and fossil extraction companies already in Alberta.

It took just seven days of war by Russia on innocent Ukraine to get Germany and France to turn 180 degrees away from dependence on Russian fossil fuels with the full knowledge they will suffer a temporary energy crisis, to concurrently increase their military budgets by orders of magnitude, and to work in concert with the EU and NATO to bring down unprecedented sanctions on the beast while arming Ukraine. There's been nothing like that for 77 years.

Meanwhile in Canada, the price at the pump is at record levels ($1.81.9 in Vancouver so far) and everyone is reacting by looking at cutting their reliance on Alberta oil. What matters to most economists is, first and foremost, the inflationary trajectory of gasoline prices (read: consternation for consumers and negative impact on the national economy) with the rejoicing in Alberta over higher prices assuming only a secondary consideration. The laws of supply and demand and the influence of foreign oil producers will always have the Alberta economy by the you-know-whats.

This war will no doubt

This war will no doubt catalyze the conversion of fossil fuel-dependent economies in the EU to seriously ramp-up renewables. The timing is right for next generation non-lithium stationary power storage batteries now entering commercialization to prove their worth. Solar and wind power have already proven their worth but haven't reached a sufficient critical mass yet to displace fossil fuels, though in Europe their progress so far is undeniably very significant even without sufficient large-scale storage capability.

I am both surprised and

I am both surprised and disappointed that no one in the media has asked the Prime Minister and the Finance Minister why the Russian oligarchs mentioned in this story are NOT on Canada’s sanction list. Like the oligarchs, our leaders need to be held accountable.