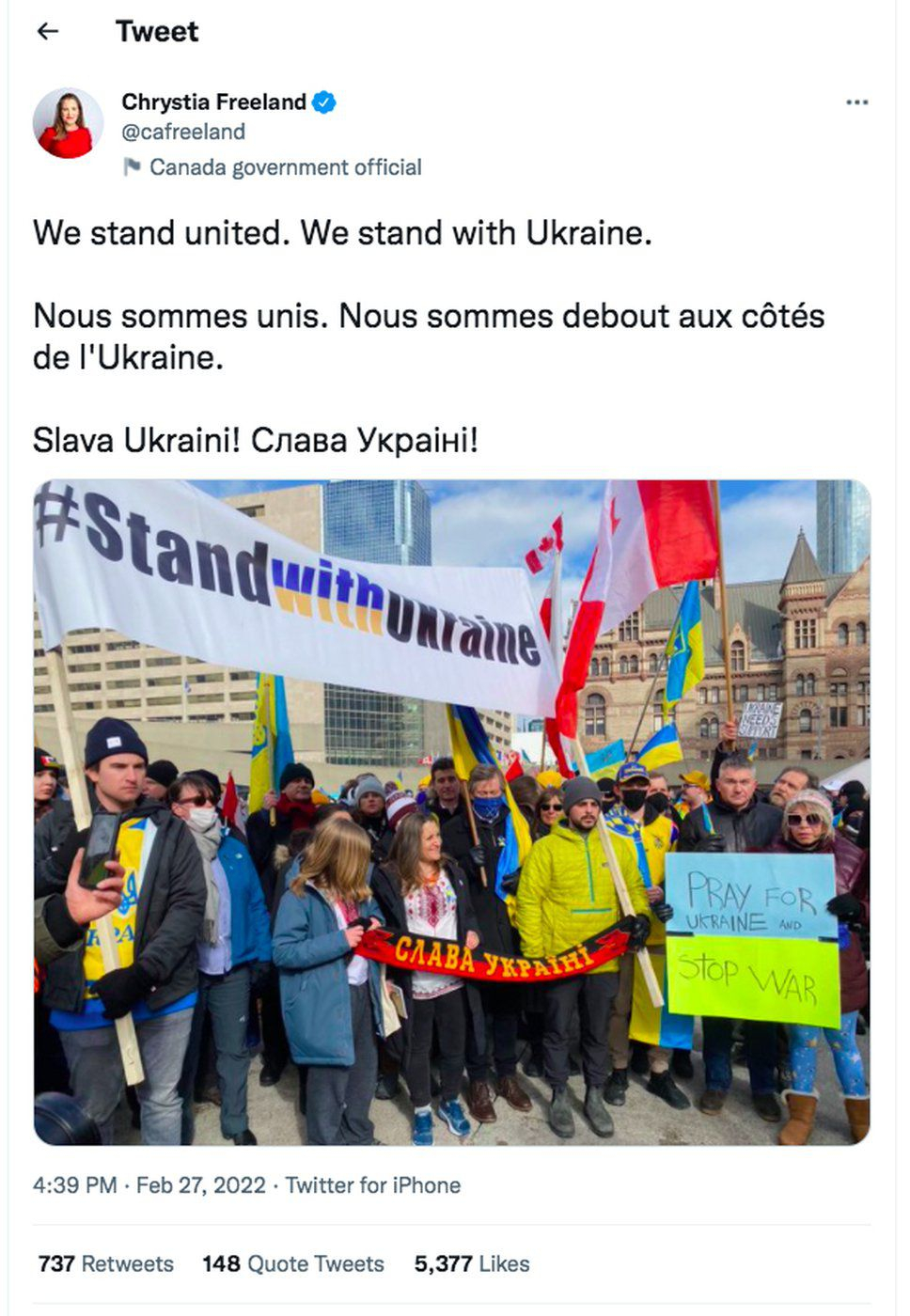 Deputy Prime Minister Chrystia Freeland was photographed holding a scarf bearing colours associated with a far-right Ukrainian paramilitary group from the Second World War at a march in solidarity with Ukraine in Toronto on Feb. 27, 2022. HO-Twitter
Previous story
Next story

Both her office and the Ukrainian Canadian Congress suggest the questions and criticism she has received about it online is linked to a pattern of Russian-backed disinformation targeting members of the Ukrainian community.

The Twitter account for Freeland shared photos of the federal finance minister at a Ukrainian solidarity march in Toronto on Sunday holding a black-and-red scarf with the Ukrainian phrase “Slava Ukraini,” which translates to “Glory to Ukraine,” written in Cyrillic.

Toronto Mayor John Tory was in the group and his account also shared photos of the moment, including one that showed the other side of the scarf, which had the phrase “Heroyam Slava,” or “Glory to heroes.” Neither Tory nor Freeland are touching the scarf in that photo.

Both accounts deleted the photos the next day. Freeland then issued an identical tweet about her presence at the march organized to show solidarity with Ukraine after Russia launched a multi-pronged attack on the sovereign country. It featured a photo without the scarf.

Ivan Katchanovski, a political scientist at the University of Ottawa, said the red-and-black flag, along with the “Glory to Ukraine, glory to the heroes” slogan, was adopted by the Ukrainian Insurgent Army (UPA) during its congress in Nazi-occupied Poland in April 1941. The UPA was the armed wing of Organization of Ukrainian Nationalists (OUN), an ultranationalist, antisemitic and fascist organization.

Adrienne Vaupshas, press secretary to Freeland, said in a written statement Wednesday that there were thousands of people at the event in Toronto, that many were trying to get a photo or give the Liberal cabinet minister tokens, such as ribbons, and that she tried to be friendly with everyone.

She added that someone “pushed a scarf (that read “Slava Ukraini”) in front of some politicians,” including Freeland. Vaupshas described it as the “slogan of Ukraine in today’s fight against Russia,” and that Prime Minister Justin Trudeau and British Prime Minister Boris Johnson have used the phrase too.

The original tweet, and its subsequent deletion, garnered a lot of reaction, which intensified after online conservative news site True North Centre wrote about it on Monday. The article noted that Trudeau had called out “Nazi symbolism” at the recent protests in Ottawa after a swastika flag was seen in the crowd.

“Can you see the hypocrisy and double standard now?” People’s Party of Canada Leader Maxime Bernier tweeted the next day, adding that he does not believe Freeland is an “actual Nazi.”

Why a photo of @cafreeland holding a black-and-red scarf sparked a firestorm online. #CDNPoli #UkraineRussia #UkraineInvasion

Can you see the hypocrisy and double standard now?

I don’t believe that Freeland is an actual Nazi, no more than PPC are white supremacist. But those who freak out because of this tweet have been cheering on the Liberals and media calling us that for years.

LOOK IN THE MIRROR https://t.co/PswCQs4r75

“A classic KGB disinformation smear is accusing Ukrainians and Ukrainian-Canadians of being far right extremists or fascists or Nazis,” Vaupshas wrote in the beginning of her statement sent Wednesday.

The KGB, which existed from 1954 to 1991, was the security service in the Soviet Union.

“A photo was taken, tweeted, and later replaced when it was clear some accounts were distorting the intent of the rally and photo,” she added.

“We condemn all far-right and extremist views and organizations, whether they are in Russia, Ukraine, or Canada. The deputy prime minister has no association with any far-right organizations,” she added.

Vaupshas did not comment when asked about what was written on the other side of the scarf the minister was holding.

A statement from Tory’s office said the mayor attended the rally to show both his and Toronto’s support for Ukraine and its people. “We are not aware of this particular scarf or its meaning. The mayor is always focused on bringing our city together during difficult times and in no way wants to do anything that divides our residents as we work to support the Ukrainian community.”

Conservative MP James Bezan, who was also at the rally and seen in the photo holding a sign someone gave him that said "pray for Ukraine and stop war," said Thursday that he was not aware of what was happening with the scarf at the time. But he also suggested the attention the original photo is getting is feeding into Russian disinformation efforts.

"I just don't think in the moment … people are thinking about how all this plays out with a Putin disinformation campaign," he said.

According to Katchanovski, contemporary Ukrainian ultranationalist groups, such as Right Sector, have adopted the red-and-black flag along with the "Glory to Ukraine" greeting before and during the pro-western Euromaidan protests that led to the removal of former Ukraine president Viktor Yanukovych from power in 2014. He said its widespread subsequent use has led some to believe that it is a traditional Ukrainian greeting.

There have also been attempts in modern Ukraine “to recast the OUN and the UPA as popular national liberation movement, which fought against both Nazi Germany and the Soviet Union, and to present OUN and UPA leaders as national heroes,” said Katchanovski.

Russian President Vladimir Putin has argued Ukraine is committing genocide against ethnic Russians and that the state needs to be “de-nazified” as justification for his invasion.

“The glorification of these organizations has been the subject of an emerging criticism by historians both in the West and within Ukraine,” said historian John-Paul Himka, a professor emeritus at the University of Alberta and an uncle to Freeland.

“Putin has exploited the heroization of these nationalists in his propaganda. With his invasion, he has only brightened their image.”

Katchanovski said scholarly studies and archival documents show the OUN collaborated with Nazi Germany in the beginning, and at the end, of the Second World War. The Bandera faction of the OUN, which controlled the UPA, led a campaign of ethnic cleansing of Poles in Volhynia in 1943. (Poland’s Parliament voted in 2016 to recognize the massacre as a genocide.)

“Many OUN and UPA leaders and members, who headed or served in the police and local administration during the Nazi occupation of Ukraine, helped Nazi Germany to perpetrate in the Holocaust and Nazi genocides of Jews, Roma, Ukrainians, Byelorussians and Russians,” Katchanovski said.

Katchanovski nonetheless said neither the OUN nor the UPA were Nazis, who killed millions of Ukrainians.

He also said Ukraine President Volodymyr Zelenskyy, who is Jewish and a descendant of Holocaust survivors, and his government “are not Nazis or neo-Nazis, and there is no genocide in Ukraine.”

Marvin Rotrand, national director of the League for Human Rights at B’nai Brith Canada, condemned the use of the black-and-red flags spotted at pro-Ukraine events.

“The UPA’s black-and-red flag is consistently recognized as a fascist emblem and a hate symbol throughout the international community,” he said.

After The Canadian Press contacted Freeland’s office for comment, the Ukrainian Canadian Congress sent a statement from its president, Alexandra Chyczij, reacting to allegations on social media that Freeland was showing support for extremists with the scarf.

“Ms. Freeland has been a victim of Russian disinformation before and this is a typical Russian smear to discredit Ukrainians and Ukrainian-Canadians."

Freeland, a Toronto MP of Ukrainian heritage, was banned by Russia in 2014 after Putin retaliated against sanctions imposed on his country over its annexation of Crimea.

Her grandfather, as described in an article written by Himka that the Globe and Mail reported on in 2017, was editor of a Nazi propaganda newspaper, the Krakow News, in occupied Poland during the Second World War. The Globe reported Freeland had edited the article.

When the news of her grandfather’s role was first reported that year, including by pro-Putin sites, Freeland initially linked it to a Russian disinformation campaign.

This report by The Canadian Press was first published March 3, 2022.

The picture and the article

The picture and the article illustrate the tangled, agonized and complicated history of Ukraine. I am not a apologist for the vagaries of Ukrainian governance, nor for the atrocities committed on its territory over the centuries. Like most of Europe armies have repeatedly marched over it and there is scarcely a pure blood native to be found anywhere on that continent. Political realities have rampaged across Europe leaving behind a kaleidoscopic wreckage of political, socio-economic and religious fealty. It is counter productive to nit-pick - what matters is now. What needs to be respected is the principle of self determination and human rights,. Russia is disrespecting both - as it generally does.

I have long believed that the former Soviet satellite states need to create their own common self defense pact - not to depend on NATO or the EU to protect them. Neutrality is their only realistic defense against the paranoid fears of Russia and its incessant drive to both expand and create a "wall" of puppet buffer states against invasion.

Despite its adoption of electronic weapons, Russia still believes in the power of territorial protection