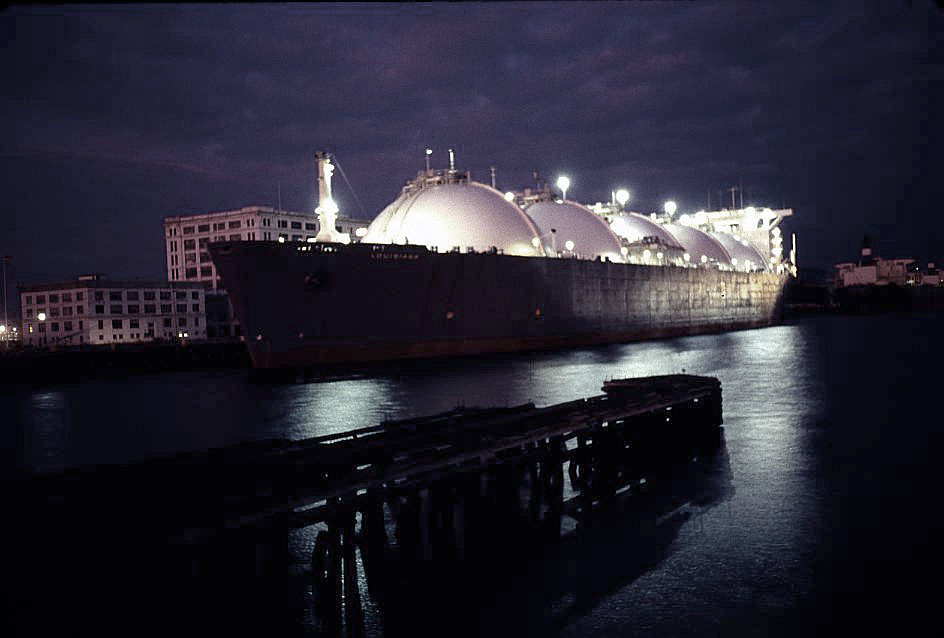 An image of an LNG tanker. Photo by Ron Gilbert via Flickr (CC BY-ND 2.0)
Previous story

The company responsible for an abandoned LNG project in Nova Scotia has put a new plan on the table — a floating barge off the coast of Guysborough County.

Last summer, Alberta-based Pieridae Energy said its land-based proposal for an LNG plant wouldn’t move forward due to financial concerns. The original plan had a price tag of $13 billion and would entail a 5,000-person work camp while producing double the amount of gas the new proposal is expected to.

Now, about 150 people would be lodged up to work at the site. Pieridae has a page on its website dedicated to the idea of the floating barge. In a statement to Canada’s National Observer, James Millar, director of external relations at Pieridae, said the company has been looking at the idea since last summer.

Leasing a barge would mean the project could be completed in three to four years, said Millar, and would cost much less than its land-based counterpart. In an emailed statement, he said the barge would emit around 400,000 tonnes of carbon a year, compared to the three million tonnes estimated for the land-based facility.

“We would offset this with a CCS [carbon capture and storage] project in Alberta that we announced in May of 2021. Some argue CCS technology is not proven. They might look at Boundary Dam Unit 3 in Saskatchewan, which has been successfully sequestering carbon since 2014. This project was one of a few studied as part of our initiative,” said Millar in part of his statement.

“What we need is a commitment of support from the Government of Canada that this initiative is a national priority.”

The company said the project would be a “net-zero emissions floating LNG facility,” made possible through the carbon capture facility in Alberta. The Goldboro project would liquefy natural gas piped in from Alberta and see it shipped off to Europe.

“I really don't know how they're trying to prove the efficacy of having carbon capture in one province and running it through pipelines to reach another province all the way across [Canada],” he said.

Gurumurthy said carbon capture doesn’t address the real issues with the Goldboro LNG project — that any new fossil fuel developments are in direct contradiction to advice from the latest IPCC report and other scientific advice; that it would further lock Nova Scotia into an oil and gas reliant economy rather than funding for a just transition; and the potential effect it could have on the surrounding environment. He worries about a floating terminal in rough Atlantic waters, and the marine ecosystem that would surround it.

The company responsible for an abandoned LNG project in Nova Scotia has put a new plan on the table — a floating barge off the coast of Guysborough County.

As well as environmental groups that pushed back on the initial project, there were numerous Mi'kmaw opponents, who worried about the environmental impacts as well as the effect a labour camp could have on the surrounding communities — a fear solidified by the 2019 National Inquiry into Missing and Murdered Indigenous Women and Girls (MMIWG).

Canada’s National Observer reached out to Tim Halman, Nova Scotia’s environment minister, for comment on what the environmental assessment process would look like now that the project has shifted. His office said the department hasn’t received any revisions from Pieridae to date.

“Pieridae has two environmental assessment approvals for their original Goldboro LNG project — one for the facility and another for the realignment of Marine Drive (Highway 316). If a company with an approved environmental assessment wants to change their project or propose a different one, a project description is required to determine the regulatory path forward,” said a statement from his office.

The company stresses it’s not taking advantage of Russia’s invasion of Ukraine, pointing to documents that show the floating barge was already in discussion in the summer. However, Millar did say, “Pieridae has a solution that would allow Canada to take a leadership role in supplying much-needed natural gas overseas for 20 to 30 years, pushing back against the threat of Russia weaponizing gas against Europe by turning off the taps at any time.”

However, Gurumurthy says Pieridae using the invasion as leverage for fossil fuel expansion comes off as "opportunistic." Canada’s Environment Minister Steven Guilbeault rebuked claims around Canada needing to supply more oil and gas to Europe, as did numerous environmental and climate organizations.

For Gurumurthy, he hopes people in Nova Scotia will push back against the project like they did when the land-based option was on the table.

“We'll keep doing further analysis into any proposed projects — not just the environmental aspects of it, but also the economic aspects of it,” he said.

“... There's no environmental advantage and there's no economic advantage.”