Amazon rainforest may be nearing the point of no return 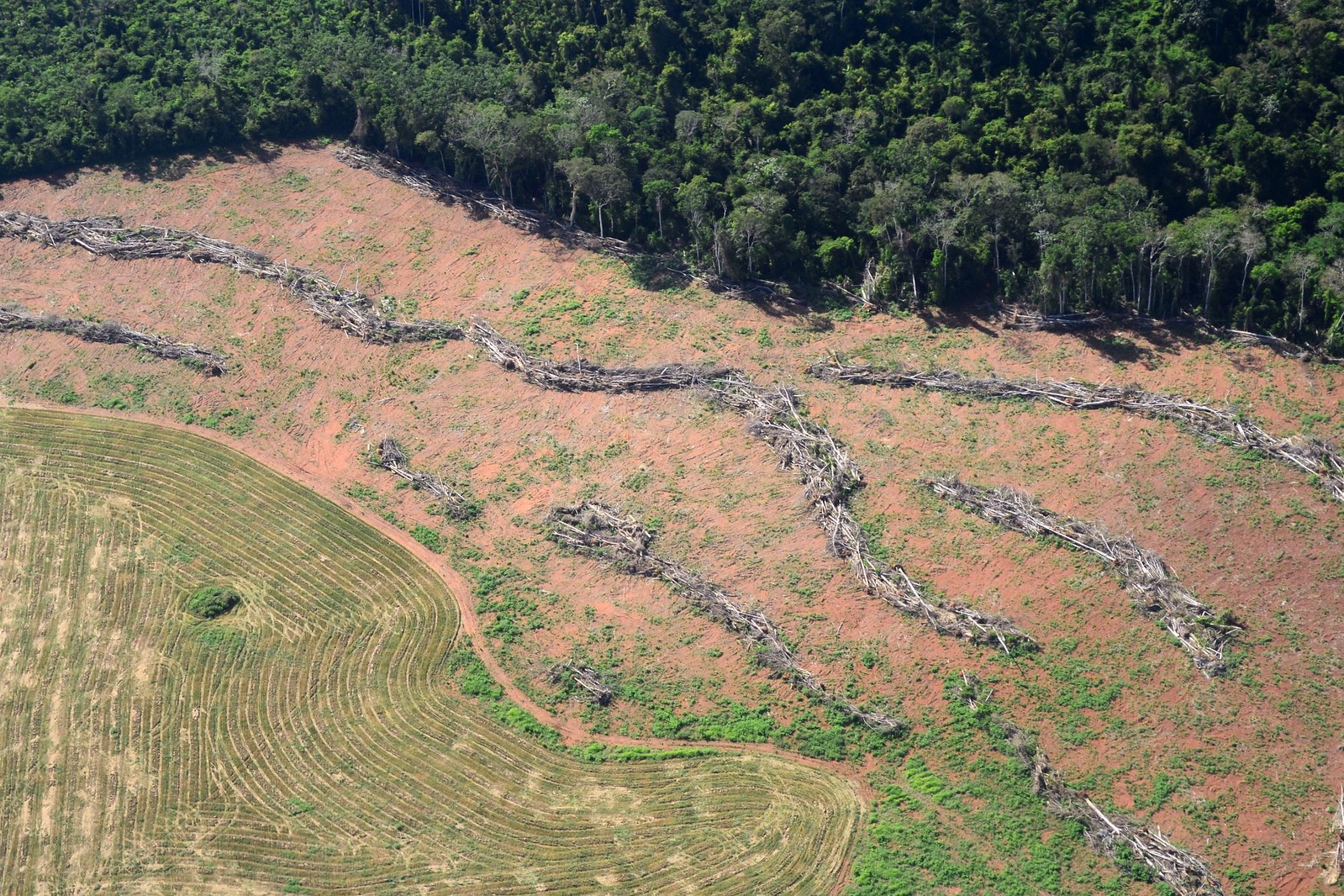 In 2020, the COVID-19 pandemic slowed down just about everything — save for deforestation of the Amazon. That year, Brazil lost almost 15 square miles of vegetation per day, equal to 24 trees every second. That’s largely thanks to ranchers and farmers, who clear-cut the forest and burn the detritus to make way for crops and cattle. The burns can also ignite peat, concentrated organic matter in the soil that releases extraordinary amounts of carbon into the atmosphere. The Amazon is transforming from an enormous sink where CO2 is sequestered into a source of the planet-heating gas.

“The Amazon now is in an emergency situation,” says Luciana Vanni Gatti, who studies the rainforest at Brazil’s National Institute of Space Research. “Deforestation is increasing year by year: 2020 was worse than 2019, 2021 was worse than 2020, and we are sure 2022 will be worse yet.”

This animation shows deforestation of the Amazon rainforest in the western Brazilian state of Rondônia from 1986 to 2010. ESA/USGS / Deimos Imaging

Now scientists are racing to figure out if and when the Amazon might reach a dreaded tipping point, a sort of point of no return when the greatest rainforest on Earth could dry out and turn into a sprawling savanna. The end result will be the loss of an irreplaceable ecosystem and a major player in global climate dynamics.

A paper published recently in the journal Nature Climate Change aims to provide more clarity on that tipping point, which may be rapidly approaching. While prior research used complicated modelling to predict how the decline might unfold, this new research is based on satellite data that shows 75 per cent of the Amazon has become less resilient to disturbances like drought.

For a forest, one way to track resiliency is through a satellite measurement called vegetation optical depth, or VOD, which penetrates through the canopy and detects how much woody biomass there is. (Other satellite techniques just look at the tops of trees, but VOD gets a better picture of what’s hidden underneath.) These scientists also looked at a separate data set tracking changes in types of land cover — for instance, forest versus farms — which allowed them to pick out where urban areas and croplands have intruded on the rainforest.

Because they had data going back to 1991, they could watch how long it took for a given plot of the Amazon to recover by growing its biomass back after a disturbance. This regrowth is resilience.

And the Amazon is losing it. The researchers broke the rainforest up into an imaginary grid, allowing them to keep track of vegetation within the cells and to correlate that with stressors like droughts or nearby land development.

Satellites spot troubling signals that may portend a transformation from rainforest to savanna, with profound implications for the planet. #ClimateCrisis #AmazonRainforest

They found that the vegetation in over three-quarters of the Amazon has been losing resilience since the early 2000s — a slower rate of return to normal after disruptions. Because the researchers also had that land-cover data, they could further show that areas that receive less rainfall or are closer to human disturbances, like farmland, are losing resilience faster than wetter, unsullied land.

The Amazon is also taking longer to recover from perturbations like weather events, which unfold over weeks or months, as well as the longer time frames of drought. “That suggests that the system is slowing down,” says climate scientist Chris Boulton of the University of Exeter, lead author of the new paper. “It's taking longer to recover from the short-term fluctuations that are perturbing it away from its happy place.”

You wouldn’t know that from a more simplistic measurement of the Amazon, like satellite images that show only the rainforest’s land cover — where the forest is and isn’t. VOD allowed Boulton and his colleagues to parse the biomass in much finer detail, giving them a more complete picture of how the Amazon responded to extreme droughts. Not well, as it happens: Loss of resilience spikes when the landscape dries out.

“There's been three 1-in-100-year droughts in the Amazon fairly recently,” says Boulton. The team saw a spike in their signal during the droughts of 2005, 2010, and 2015, he continues, “which suggests that it's picking up that kind of change in resilience. But that's alongside a general increase in the approach toward a tipping point, regardless of those individual events.”

Another major threat is logging, including a kind that’s done by thinning selected trees but leaving others. But even if loggers don’t completely raze an area, they can still destabilize the forest.

“What is concerning is in addition to deforestation, which is relatively easy to monitor and keep track of, we're seeing a big increase in what is called forest degradation, where biomass is extracted from the forest,” says environmental scientist Pontus Olofsson, who studies the Amazon but wasn’t involved in the new work. “So they're cutting down trees, but not to the point that the land cover is changing. So that land cover remains forest, but with fewer trees.”

Ranchers, too, contribute to a more subtle weakening of the landscape. They may fell trees but leave a patch of forest standing. Because the animals left inside that little patch are now surrounded by barren land, they don’t dare leave their island. Even birds won’t risk trying to make the journey out of the patch. At the same time, the edges of that rainforest are now exposed to open air, and they rapidly degrade. A rainforest is supposed to be wet, but now its edges are baking in the sun. Over time, rainforest vegetation dies off, and savanna-style grasses creep inward.

This can even happen on a smaller scale when people slice through the Amazonian biomass to build a road or electric lines — the edges of that slice will dry out, initiating that creep. “What happens in the deforested area doesn't stay in a deforested area,” says tropical ecologist Paulo Brando of UC Irvine, who studies the Amazon but wasn’t involved in this new research.

This new study found that the Amazon loses resilience when it’s butted up against human activity. Brando’s own research has found that about 17 per cent of the southeast Amazon, where deforestation is particularly acute, is within 100 metres of one of these dried-out edges. That’s a huge problem because the Amazon is an extremely sensitive hydrological machine: Trees soak up rain and release water vapour as they photosynthesize — so much water, in fact, that the Amazon generates its own rain.

“Evapotranspiration is very important in the water cycle to produce precipitation,” says Gatti. “The Amazon can put in the air a comparable amount that the Amazon River discharges to the ocean — it's a very big amount of water vapour in the atmosphere.”

All this extra atmospheric water goes on to hydrate every other country in South America, save for Chile, where the Andes block the moisture. Losing the Amazon would parch the continent. It’s a self-reinforcing crisis: Deforestation means fewer trees, which means less moisture is sent into the atmosphere, which means less rain, which means more trees die. This evapotranspiration also cools the forest — it’s sweating, basically — so without it, the Amazon not only dries out but heats up.

“You destroy the forest enough, change the climate enough, to create a vicious cycle that perpetuates itself,” says Brando. “I think there are enough elements to say that some parts of Amazon are being pushed over the edge. That is where we have most of the deforestation, most of the droughts, most of the heating happening, and most of the losses in animals.”

The dried-out husk of a rainforest also burns more easily, so it releases more carbon into the atmosphere. If the forest keeps losing water and transitions into a savanna, it will be a much drier, grassier ecosystem that is far more flammable than a rainforest.

Scientists can’t yet say when the Amazon as a whole might reach that tipping point, as there are a galaxy of variables at play, like the rate of deforestation and how droughts might intensify. But in the rainforest’s southeast, they’re getting glimpses of what that point might look like. Here, as the forest fragments and the edges are exposed to more sun, big trees that need a lot of water are dying off. The ones that tend to survive are similar to those you’d see on a savanna — they might even lose their leaves during the dry season, unlike the evergreens of a rainforest.

Brando notes that not all of the Amazon may reach that tipping point. “A reduction in resilience doesn't mean that there's no resilience,” he says. “These forests, especially if they are left alone, have a really high capacity to recover.” If enough tall trees remain standing, and animals are still able to move seeds and nutrients around, and large patches of vegetation remain connected, he says, “all those elements play into the resilience of the system.”

Gatti is less optimistic, as the threat of deforestation doesn’t seem to be diminishing.