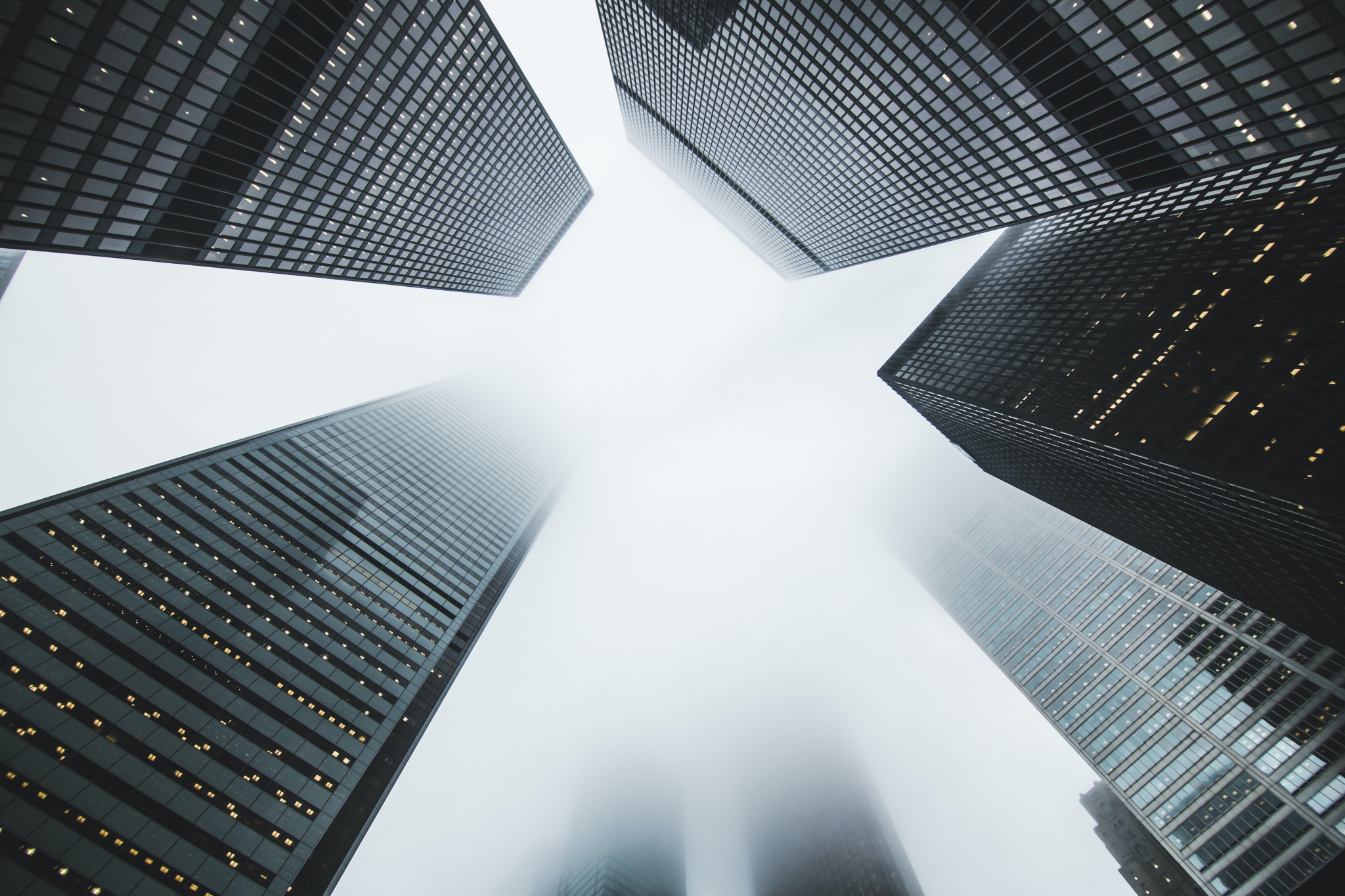 Fossil fuels burned to heat homes, energy used to cool office towers and electricity powering appliances in restaurants all contribute to the notable chunk of emissions coming from the building sector — around 18 per cent of Canada’s annual greenhouse gas emissions.

However, new building codes from the National Research Council aim to to have all new buildings constructed to net-zero energy ready standards by 2030. Meaning, a new building will be so efficient, it is “ready to supply all of its energy use from renewables or offsite clean energy sources,” explained Kevin Lockhart of Efficiency Canada, a non-profit based at Carleton University's Sustainable Energy Research Centre.

Originally expected in 2020 but released this week, the codes — which are updated every five years — set a pathway for new buildings in Canada to reach net-zero energy ready standards through a five-step approach that includes a slew of upgrades, such as improving the building envelope and installing more efficient windows.

The move to make buildings more efficient also makes them more resilient — improving something like the building envelope can help a building retain its heat during a power outage in the winter, keep buildings cooler during extreme heat events and keep pollutants out during forest fire season, said Lockhart.

Each step has a gradual increase in energy efficiency, leading up to the net-zero energy ready mark by 2030. At the 10 per cent tier, for example, a building's energy performance would need to be 10 per cent better than the minimum requirements from the last building code. Higher tiers may include changes to the building form, whereas lower ones may include measures such as efficient windows. 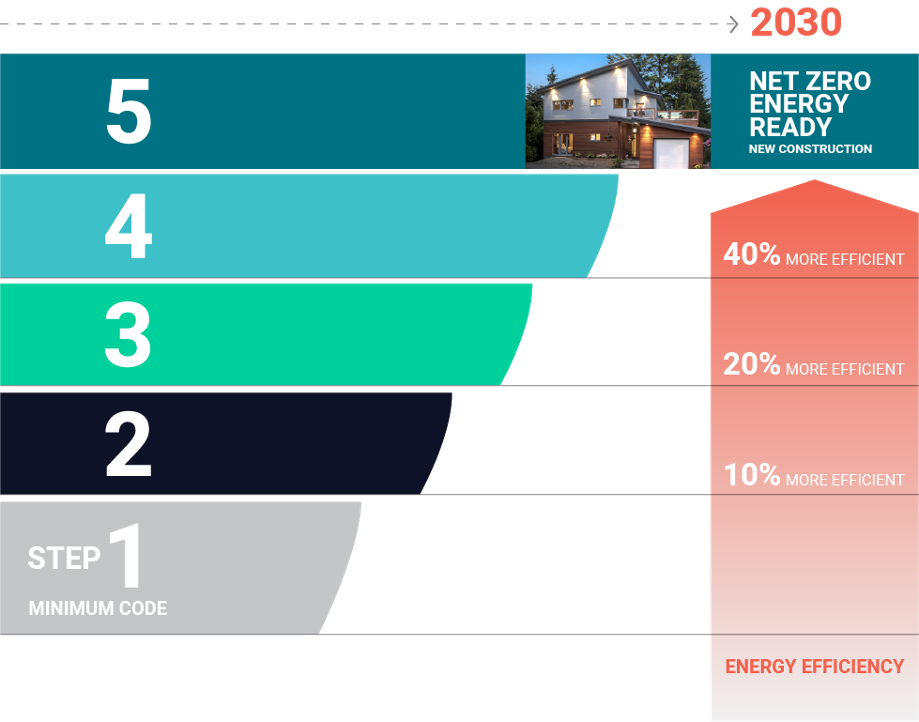 Lockhart said having a gradual pathway to net-zero is an important step for the sector. However, getting the codes adopted at a provincial level — and having enough funding to do so — is a barrier.

“I think the most exciting aspect is that the tiered code framework is here now. It really works as a progressive, performance-based series of steps that start with a familiar building code, much like what we currently have,” Lockhart said.

“And then through those steps, the energy performance of the building is raised incrementally and ultimately resulting in net-zero energy ready.”

Here's the breakdown on the new federal building codes, and the steps @EfficiencyCAN says are needed to get them implemented at a provincial level.

Building codes affect up to 81 per cent of energy use in houses and up to 68 per cent in buildings, making them an essential tool in reducing emissions, especially as energy use in buildings is set to go up over the next 10 years.

Since the codes are federal, provinces will be required to adopt them within approximately two years, working within the cycle of their building codes. Under the Canadian Free Trade Agreement, all provinces and territories agree to harmonize their building codes with national ones. So far, B.C. is the only province that has committed to its own net-zero code, but new buildings aren’t required to be net-zero until 2032 under its plan.

This set of codes doesn’t address existing buildings — an essential move, according to the Pembina Institute, which found a “renovation wave” to decarbonize Canada's buildings could not only make homes more livable but inject $48 billion into the Canadian economy over the next 20 years. A separate set of codes for existing buildings is set to come in 2025, explained Lockhart.

Canada-wide support for net-zero buildings, and the gaps that remain

At the same time the new codes were released, polling by Abacus Data for Efficiency Canada showed 60 to 77 per cent of Canadians support or strongly support net-zero building codes.

With the federal budget set to be released April 7, Efficiency Canada called on the government to create a Net-Zero Building Code Acceleration Fund of $200 million over three years to help provinces and the building industry reach net-zero energy ready standards for new buildings quicker. On Tuesday, the 2030 Emissions Reduction Plan, a federal report that includes targets for the oil and gas industry, among others, was released and included a commitment to launch the fund.

“It's really about helping provinces, territories and municipalities prepare their jurisdiction in terms of workforce training and development,” said Lockhart.

“... And making sure that the products are available in their jurisdiction.”

The next step, as far as Efficiency Canada is concerned, is for citizens to call on their provinces and municipalities to put the code into effect as soon as possible. The agency has produced a tool kit to help individuals and municipalities advocate for more efficient building codes.

As provinces adopt the code, they could include pieces that were left out of the federal code, such as mandatory airtightness testing, said Lockhart. Efficiency Canada pointed out the lack of airtightness testing as a notable gap when the code was under review, noting air leakage is the “largest source of heat loss in buildings.”

“I think it is also notable to point out that even at net-zero energy ready standards, the [new building codes] still fall short of the International Energy Agency's Net Zero scenario,” he said.

“And under that scenario, they urge all governments to act before 2025 to ensure zero-carbon ready, compliant building codes. So while these codes are an important first step … they also highlight that we need to double down on our efforts to develop and adopt and implement the net-zero emissions code.”

Along with the new building codes, national fire and plumbing codes were also released, which Kevin Griffiths, chair of the Canadian Commission on Building and Fire Codes, said will make all buildings safer and more accessible.

“These new codes are more reflective of the current world we live in,” said Griffiths.

“Thanks to these updates, it will be easier for Canadians with accessibility considerations to navigate different spaces; large farm buildings are now included in the codes to reflect the evolving agricultural sector; and energy performance levels have been introduced to make buildings more energy efficient.”

Okay so this will help reduce

Okay so this will help reduce the 18% of emissions . It is a good start but what about the other 82%? Is this just to look good so the government won’t have to tackle the harder sources of emissions such as industry who I imagine could lobby long and hard to prevent regulations that might impact their profits.

Is your glass always half

Is your glass always half empty? Reducing heating demand by 10-15% will send a very strong market message to gas producers - that the future holds fewer sales, not more. Capitalism will cause them to de-invest. On top of that, there are the industrial re-alignment effects of the new Code that will make this reduction possible, and generate alternative, 'clean energy' jobs. As an example, five years ago it was not possible to buy Passive House certified, triple glazed windows, required for Step 5 [Net Zero ready] of the new building code, in Canada. (They were made in Poland, designed in Germany.) Today you can buy them made in Vancouver. This transition to made-in-Canada-solutions, practical, affordable and available now, is as important as the social acceptability shown by the survey in this article. An ambition to go Net Zero is almost pointless if your local builder can't buy the necessary components and supplies.

Sometimes a matter of won't,

Sometimes a matter of won't, not can't, and sometimes can't is because don't know how/where.
The certification may not have been there, but the windows were readily available in the Greater Toronto Area over 20 years ago. Maybe they're less expensive now, I don't know. They'll become much cheaper as demand increases, because of the effects of scale.
It's a matter of what's required: that's what building standards are.
If everything required is only an incremental reduction, the overall costs are greater without any total emissions reduction. And all of those less-than-needed increments are baked in for a hundred years.
Because buildings last 100 years. Buildings made 100 years ago need retrofits, but they don't need new structural materials, and most of those used 100 years ago have all their carbon emissions at point of manufacture. The stone foundations, brick walls and solid wood don't deteriorate, and the carbon inputs required were expended long, long and become vanishingly small averaged over that time span.
But those triple glass windows are wonderful; even when it's very, very cold outside, are room temperature inside.

Not only that, if there are

Not only that, if there are 18% emissions, and a lot of new builds, there's no overall carbon reduction. There is broad agreement that there is a housing shortage, we will have higher and higher building and immigration rates (every additional household added to population needs another home to be built) although I expect there will be a bit more compensating die-off as the baby boom passes. But there was also an echo, and my neighbourhood's population is heavily skewed now to age 6 and under (ignoring the dogs and raccoons).

This article left me confused

This article left me confused about which level of government is responsible for building codes at the levels of legislation and enforcement. I had the impression it rested with the provinces.

Two conflicting phrases from the article:

"However, getting the codes adopted at a provincial level — and having enough funding to do so — is a barrier."

"Since the codes are federal, provinces will be required to adopt them within approximately two years, working within the cycle of their building codes."

I note the difference between a "model" (or template) code, which seems to be what the feds are offering, and actual legislation to which builders must adhere.

BC already has its Step Code,

BC already has its Step Code, adopted last year. I suspect it may be tougher than the federal version. I'm surprised mention of BC's being at the head of the pack of provinces wasn't mentioned.

Having said that, it would be nice of BC Hydro was ordered to not reduce its per kWh Net Metering solar power credit by 60% in 2024. The 1:1 credit would have allowed us to put 25 PV panels on two roofs and generate over 95% of all the power we consume in a year and recoup the costs in the 22nd or 23rd year of the 25-year panel warranty period. The free sunshine would have afforded the replacement of all gas appliances with electric, but that would be catalyzed with provincial and federal grants.

Many Passive House projects were inspired to build to BC's Step Five standards today, well before the 2032 end date. The owners did the math and realized spending 15% more on energy efficacy and indoor air quality generates a lifetime of savings and health benefits. Note that Passive House standards often do not include a central furnace because the energy efficiency is that good. Instead, a continuously circulating air and heat exchange unit draws a constant supply of fresh air inside and features 85% heat recovery from exhausted indoor air. The units come with HEPA filters and an optional charcoal filter for smoky conditions caused by forest fires. An electric heating coil can be added for those 30-below periods, but one can also sacrifice for additional electric or efficient wood-fire back up.

As always, a climate and energy plan requires grants and subsidies to allow more people and companies to buy heat pumps and replace windows with higher efficiency triple-glazing. Retrofitting / renovating heritage houses is another challenge that will require help.