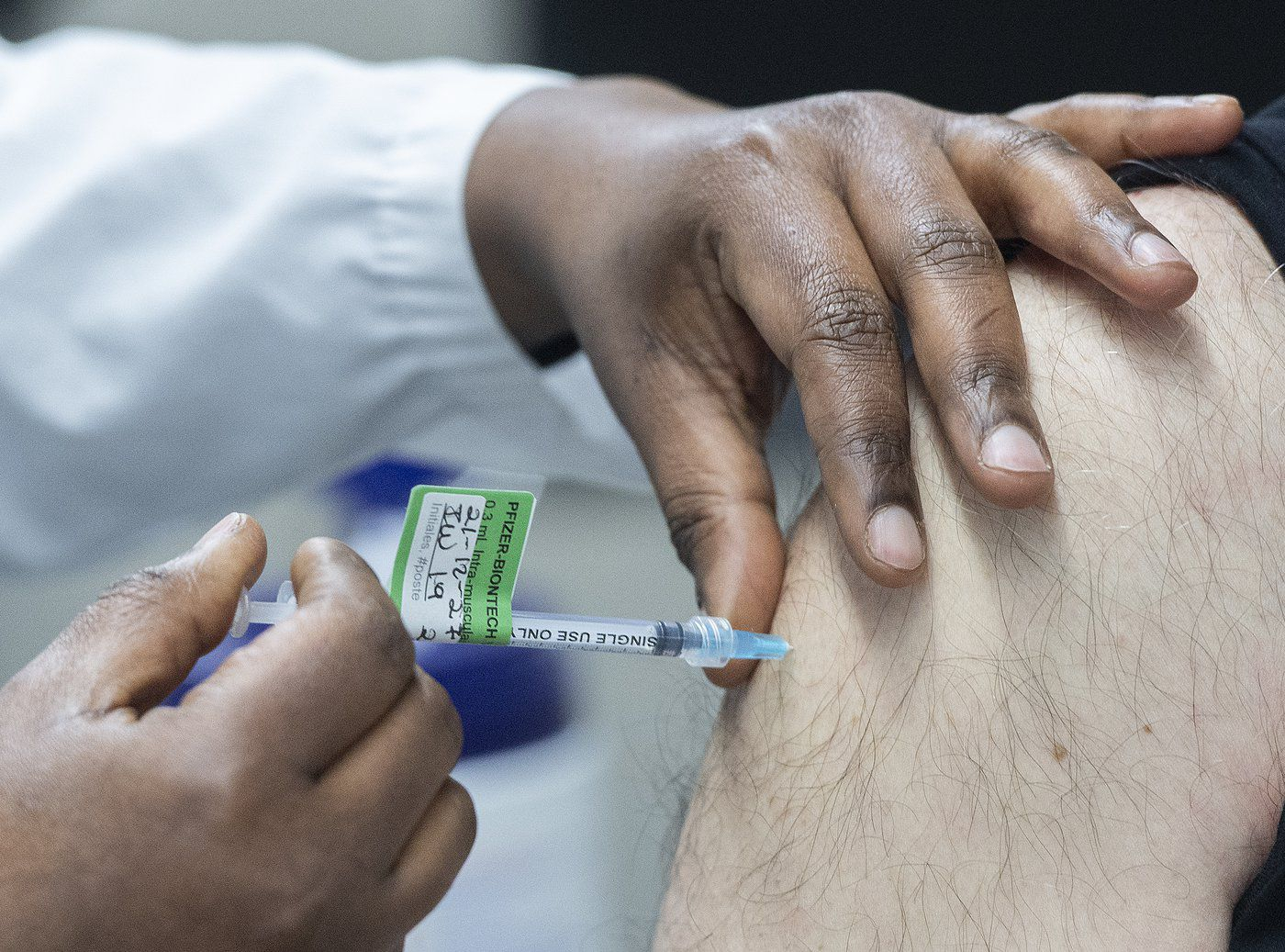 A man receives a Pfizer-BioNTech COVID-19 booster vaccine dose at the Olympic Stadium in Montreal on Dec. 27, 2021. File photo by The Canadian Press/Graham Hughes
Previous story
Next story

The National Advisory Committee on Immunization is expected to release guidance on fourth doses of COVID-19 vaccine in early April as public health indicators tick up across Canada.

That's set to come amid growing concerns about hospital capacity as the country enters what some are characterizing as a sixth wave.

A spokeswoman for the Public Health Agency of Canada said Thursday that the agency expects to publish NACI's advice on fourth doses in the coming days.

"NACI has been asked for advice on the potential use of second booster doses in elderly populations at higher risk of severe disease. PHAC is expected to publish NACI advice on this in early April," Anna Maddison said in an email.

NACI previously recommended that people who are "moderately to severely immunocompromised" receive a fourth dose of the vaccine six months after getting their third shot. Earlier this week, U.S. regulators approved a fourth dose for Americans 50 and older if it's been at least four months since their last vaccination.

The question of extra boosters has become more pressing to some due to concerning public health indicators.

Hospitalizations have started rising in some regions and wastewater trends suggest cases are too, after many provinces ditched their vaccine passports and mask mandates this month.

Some – including officials in Quebec – say the nation is on the precipice of a sixth wave of the pandemic that could once again see hospitals stretched thin.

"At some point we're going to have to stop putting numbers to (the waves)," said Dr. Susy Hota, an infectious disease specialist and hospital epidemiologist at the University Health Network in Toronto.

"A reality that we're going to have to get used to is that cases will go up and down. The real question is, what are we willing to do to try and keep them from rising at a pace where we can't keep up?"

Hota said some COVID-19 patients have been unable to leave the hospital system after developing complications, adding strain to the system that's not captured in the publicly reported numbers.

"And when you combine all of it with the need to catch up on surgeries and delayed and deferred care of a variety of natures, it's just a lot for the health-care system to be handling," she said.

Colin Furness, an epidemiologist and professor at the University of Toronto, said burnout in the health-care field and staff absences due to COVID-19 have made the issue even more challenging.

"We're hearing really quiet but urgent SOSes from the front line saying, 'We don't have this capacity that the government has been saying we have,'" he said.

He urged people to continue wearing masks and take other precautions to safeguard not only their personal health, but also the hospital system.

"'Everyone take off your mask, and we'll have a hospital bed when you need it' is a really bad idea," Furness said. "First of all, because COVID is not a disease you want. But more importantly, I don't know if that bed is going to be there."

The British Columbia government said it is preparing to provide an update on Tuesday on potentially making a fourth COVID-19 dose available to vulnerable people in the province.

Health Minister Adrian Dix said that discussions are underway about providing a second booster shot to clinically vulnerable people such as those in long-term care.

B.C. reported two more COVID-19 deaths on Thursday, bringing its toll to 2,998 people. There were 281 people in hospital, including 42 in intensive care.

The Ontario Hospital Association has noted that hospitalizations are trending upward, with the province reporting 807 patients in hospital with COVID-19 on Thursday, compared to 661 a week earlier.

As of Thursday, 786 health workers in that province were off the job because they either have tested positive for COVID-19, are awaiting test results or were exposed to a member of their household who tested positive.

Nova Scotia also reported 53 new hospital admissions for COVID-19 in the past week, with 16 patients discharged and 11 patients in intensive care.

Quebec – which started offering fourth doses to seniors over 80, immunocompromised people and residents of long-term care homes this week – saw 1,238 people hospitalized with the virus Thursday.

Health Minister Christian Dubé said outlying regions in Quebec that were spared when the highly contagious Omicron variant tore through the country are now being hit hard by what he characterized as the pandemic's sixth wave.

"There is no reason at the moment … to change the strategy we have, because people have to learn to live with the virus, to continue to protect themselves," he said.

In Ontario, Health Minister Christine Elliott also said there was no current plan to bring back any COVID-19 measures that were lifted earlier this month despite rising virus trends.

"If we need to take any further measure we will, but so far it doesn't appear that we need to do that," she said.

Ontario lifted indoor masking rules in most spaces earlier this month, along with a majority of other measures aimed at limiting spread, like proof-of-vaccination rules and crowd capacity limits.

This report by The Canadian Press was first published March 31, 2022.