By Barry Saxifrage | Analysis, Climate Solutions Reporting | April 5th 2022
#1977 of 2170 articles from the Special Report: Race to a Safer World 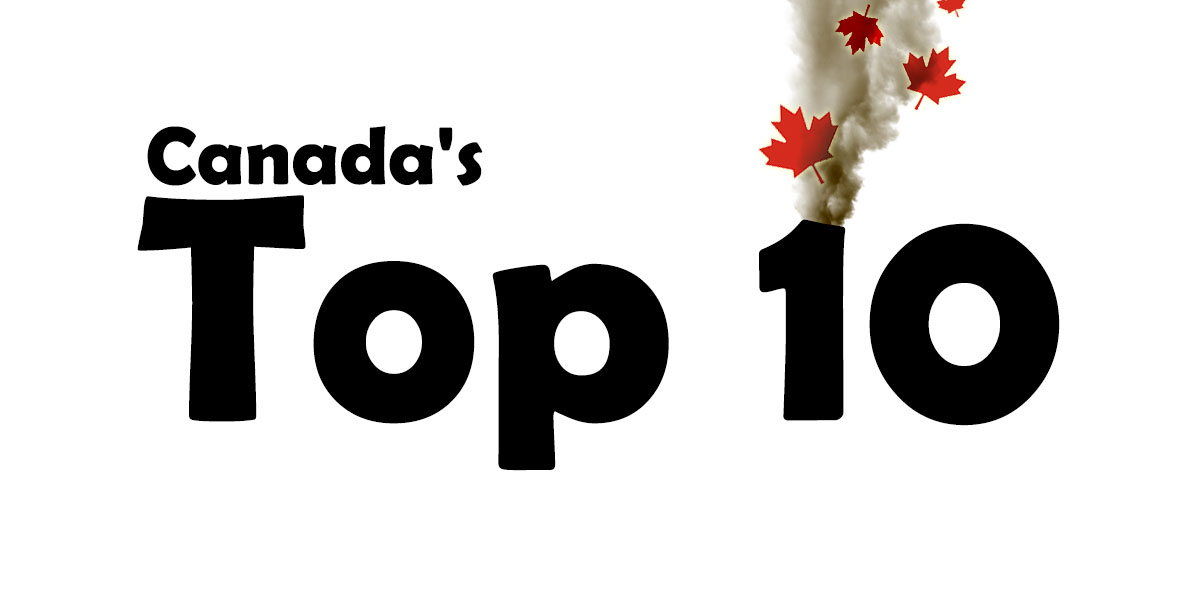 To paraphrase Winston Churchill, those who fail to learn from their climate polluting history are doomed to repeat it.

The Canadian climate discussion is once again abuzz with yet another round of future promises and plans. We've been through this many times over the past three decades. Canada promises to reduce emissions, yet the results have always been the same — emissions continue to rise.

Failure to cut our oversized emissions has left us far behind our peers in the Group of Seven (G7) nations. As of 2019, the most recent data available, Canada was the only one still emitting far above their 1990 level.

Equally worrisome, over the last decade — as the climate emergency started hitting with increasing fury, and we pledged to act faster under the Paris Agreement — Canada was the only one in the group whose emissions went up. That's shown by the solid lines on this chart.

So, with an eye to avoiding the same mistakes yet again, I dug into Canada's historical record to find the specific areas where our emissions changed the most since 1990 — either up or down.

What I found is that out of the dozens of Intergovernmental Panel on Climate Change (IPCC) subcategories, just 10 account for the lion's share of Canada's emissions increases and decreases. And several were surprises to me.

For those interested in a quick tour of our biggest climate shifts, and what's behind them, here are Canada's Top 10 in order. In the accompanying charts, emissions changes are shown in millions of tonnes of climate pollution per year (MtCO2). Red shows increases since 1990; blue shows decreases.

The first five are by far the largest, so let's start with those.

#1 — Dirtier barrels and lots more of them (up 74 MtCO2 since 1990). Fossil crude extraction has nearly tripled in Canada since 1990. Adding climate insult to injury, emissions per barrel also went up. As a result, the oil and gas industry now pipelines a billion barrels more every year into our atmosphere — while emitting an extra 10 per cent with each barrel.

#2 — Overharvesting Canada's forests (up 67 MtCO2). In another major climate loss, logging has remained high despite a steady decline in net growth from Canada's managed forests. This growing imbalance between harvesting and re-growth has tipped Canada's land use sector from a big CO2 sink into a CO2 source. (Note: This doesn't include the even larger rise in emissions from climate-fuelled wildfires, droughts, and insects. See endnotes.)

#3 — Freight trucks (up 38 MtCO2). Trucking emissions have nearly tripled in Canada since 1990. A major cause has been a shift to more CO2-intensive "just in time" supply chains, "next day" delivery, and the expanding use of trucks as rolling warehouses.

Analysis: To paraphrase Winston Churchill, those who fail to learn from their climate polluting history are doomed to repeat it, writes columnist @bsaxifrage.

#4 — Dirtier passenger vehicles and lots more of them (up 33 MtCO2). Canada's relatively weak climate policies in the transportation sector have allowed the number of gas-guzzling pickup trucks, minivans, and SUVs — a.k.a. "light-duty trucks" — to quadruple since 1990. Canadians used to drive mostly the cleaner sedan-style cars. Now we mostly drive these big climate hammers. Environment Canada says our light-duty truck fleet emits 31 per cent more CO2 every kilometre than our sedan-style cars do.

#5 — Cleaner electricity and more of it (down 26 MtCO2). Rounding out our five biggest emissions changes is the only one heading in a climate-safe direction: electricity generation. This has been Canada's only big climate success so far. Strong climate policies pushed total electricity emissions down significantly, even as the amount of electricity generated rose by a third. Canada now has some of the world's climate-safest electricity. One of the major climate tasks facing Canadians and the rest of humanity is to "electrify everything" as fast as possible. Most Canadians can now power rapid and deep emissions cuts by shifting their fossil burning to locally made electricity.

The remainder of Canada's Top 10 are relatively smaller, but they add up. And as a welcome climate relief, most of these are emission reductions.

#6 — Cleaner off-road recreational vehicles and fewer of them (down 12 MtCO2). I was surprised that Canada's second-largest emissions reduction is from an area I knew nothing about: "Off-Road Other." I asked Environment Canada about it, and they said the big emissions cuts here are mostly from a reduction in the number of off-road recreational vehicles — along with a shift from 2-stroke engines to cleaner 4-strokes. This is an example of how cleaning up toxic air pollution reaped climate benefits along the way.

#7 — Ozone hole versus climate change (up 11 MtCO2). Ozone-destroying chemicals, called CFCs, were used in refrigerators, air conditioners and heat pumps. These have been replaced with ozone-safe alternatives known as HFCs. But the most common and least expensive HFCs are more powerful greenhouse gases. A global Kigali Agreement signed in 2019 aims to replace these with climate-safer alternatives.

#8 — Factory closed (down 10 MtCO2). Canada's third-biggest emissions reduction was caused by the closure of the nation's only adipic acid factory. Yeah, I had to look that up too. Adipic acid is a chemical used mostly to make nylon. Producing it emits N2O, which is a greenhouse gas.

#9 — Cleaner metal production and less of it (down 10 MtCO2). Emissions cuts here came from a combination of cleaner processes and reduced production in Canada.

#10 — Cleaner small cars (down 9 MtCO2). As mentioned above, the IPCC has two categories for passenger vehicles. SUVs, minivans, and pickup trucks discussed above are listed under "light-duty trucks." The smaller sedan-style cars discussed here get listed under "light-duty vehicles." In Canada, the number of sedan-style cars has increased since 1990. And so has the number of kilometres they are driven. But their total climate pollution has fallen. That's because this class of passenger vehicle has been getting cleaner per kilometre faster than kilometres driven have gone up. Unfortunately, this small climate step forward with cars got wiped out three times over by the switch to much more CO2-intensive alternatives of SUVs and pickup trucks.

One step forward, three steps back.

This has also been the consistent pattern of Canadian climate failure across the Top 10, as well as across all the IPCC subcategories combined. For every tonne of emissions reduced in one area, three more tonnes were added to another area.

Another troubling pattern seen in this Top 10 tour has been the shift by industries and individuals to more CO2-intensive alternatives.

With such huge climate policy loopholes, it's no wonder Canada's emissions keep going up.

Our decades of foot-dragging have burned up much of the time we had to act. And it is locking in deep structural emissions sources that will run out the clock even further. If we want any shot at preventing a full-blown climate crisis, we need a new set of climate policies this time around. Policies that will finally target the root causes driving our biggest emissions increases.

Here are some additional details about a few of the Top 10 changes discussed in the article:

Canada calls itself a climate

Canada calls itself a climate leader. If people around the world lived like us, global emissions would skyrocket.

Prime Minister's Office: "As a climate LEADER, Canada has put in place measures to reduce pollution to work toward meeting our Paris commitments, and achieving a net-zero economy by 2050. As the world shifts to a cleaner and greener economy, Canada will continue to take a LEADERSHIP role in the fight against climate change, so we can keep creating new middle class jobs across all sectors and building a better future for everyone."
"Prime Minister Trudeau announces enhanced and ambitious climate action to cut pollution at the COP26 summit" (November 1, 2021)
https://pm.gc.ca/en/news/news-releases/2021/11/01/prime-minister-trudeau...

"Trudeau has been hailed as a climate LEADER internationally, pledging to cut Canada’s emissions and invest in cleaner energy." (Aljazeera, 29 Mar 2022)
https://www.aljazeera.com/news/2022/3/29/canada-unveils-multi-billion-do...

"mostly from a reduction in

Where I live, ATVs and OHVs seem to be multiplying. Wreaking havoc in the backcountry.
Are Canadians really buying fewer OHVs and using them less?