Wrong-way Canada emitting more while our G7 peers clean up

By Barry Saxifrage | Analysis, Climate Solutions Reporting | March 23rd 2022
#1968 of 2168 articles from the Special Report: Race to a Safer World 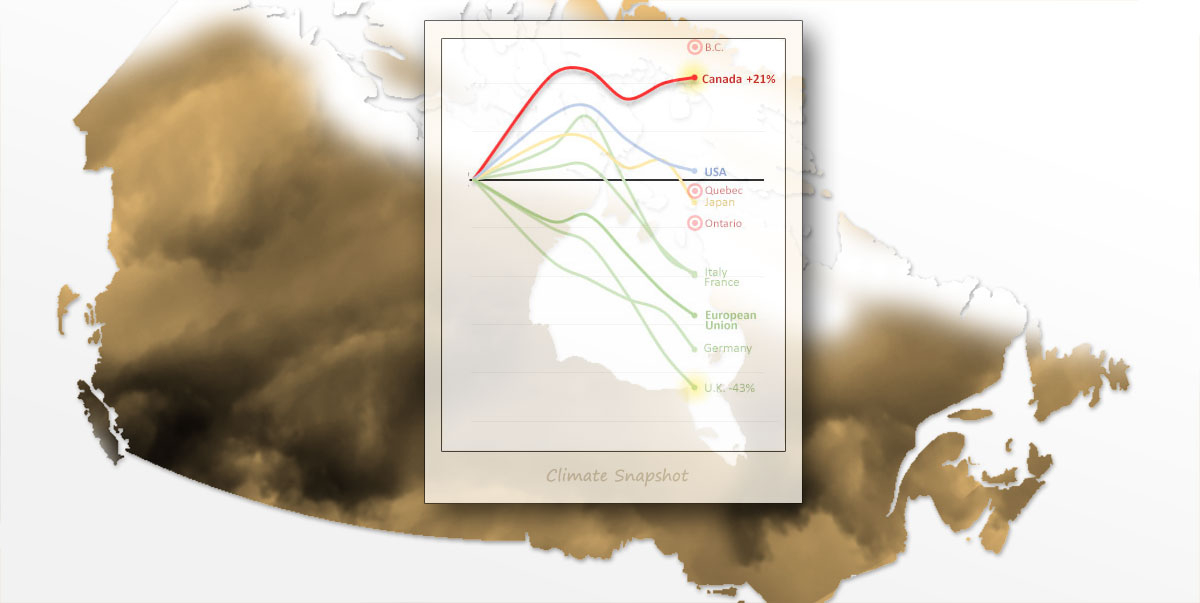 Canada is the only G7 nation emitting far above 1990 levels — and Alberta, Saskatchewan and B.C. are the main drivers of this climate failure.
Previous story
Next story

Humanity is hurtling towards a full-blown climate crisis. To avoid this dystopian future, climate pollution must rapidly plunge to zero.

Canada and its peer nations in the Group of Seven (G7) — the United States, United Kingdom, Germany, France, Italy and Japan, plus the European Union — are some of the world's largest emitters. Combined, these nations emit one-third of global climate pollution. And in each nation, emissions per person are above the global average.

These are also the world's largest advanced economies, controlling half the world's wealth and producing half the world's GDP. In short, if the world is going to prevent a climate tragedy, these nations with the most resources, talent, technology and capacity will need to lead the way. So how much climate progress have Canada and its G7 peers made so far? Let's take a look.

My chart below shows what each nation has done with their climate pollution since 1990. That's the international baseline for measuring climate progress. The chart ends with 2019 because that is the most recent year for which emissions data is available. As you can see, Canada has been the rogue climate polluter in the group.

Canada first promised to cut our oversized climate pollution in 1988. More than 30 years later, we're the only G7 nation that is still emitting far above our 1990 levels.

Even more troubling has been our failure to act during the last decade. Since 2010, as the climate crisis has started to hit with increasing fury, every other G7 nation has made significant cuts in its emissions — except Canada. Ours went up instead.

If the British can do it, surely Canadians can, too. The difference so far has been that the British passed laws that required their emissions to go down. We haven't. In particular, they passed their innovative Carbon Budget law — way back in 2008 — that required legally binding targets covering all emissions in every year. We could have adopted a version of this proven policy package at any point. We still can.

Canada's five biggest provinces emit 90 per cent of the nation's climate pollution. To let you compare their climate progress — or failure — to our G7 peers, I've added a dot for each province on the chart. Three have dramatically increased their emissions. These three provinces have been the primary drivers of Canada's climate failure.

Analysis: Canada is the only G7 nation still emitting far above 1990 levels — and we are still heading in the wrong direction, writes columnist @bsaxifrage. #ClimateCrisis #FossilFuels #Emissions

British Columbia's emissions are 27 per cent higher than in 1990. The fact that B.C. has allowed its emissions to surge so high surprises many people I talk to. That's because B.C. was seen as a climate policy leader way back in 2008 when it introduced Canada's first economy-wide "carbon tax."

As you may remember, that was the same year the U.K. introduced its Carbon Budget law. But unlike the British, who followed through, British Columbians quickly slammed the brakes on their climate policy and have allowed their emissions to keep rising instead.

Alberta emits 61 per cent more than in 1990. Its climate polluting has been turbocharged by skyrocketing extraction of fossil fuels — combined with its aggressive hostility towards effective climate policy.

Saskatchewan emits 73 per cent more than in 1990. Like Alberta, this province has been cranking up the climate burner like there is no tomorrow.

In contrast, Canada's two most populous provinces have reduced their annual emissions since 1990.

Quebec's record, though, is a mixed bag. A few years ago, its emissions had fallen to nine per cent below 1990. But rising emissions since have wiped out two-thirds of that progress. Three steps forward, two steps back.

Ontario reduced emissions to nine per cent below 1990. The big caveat here is that all of this — and more — can be attributed to a single policy enacted in 2007: Cessation of Coal Use Regulation. The provincial government calls this the "single largest greenhouse gas (GHG) emissions reduction action on the continent." This one policy eliminated 27 million tonnes of carbon dioxide (CO2) per year. That's substantially more than the province's overall reduction since 1990 of 17 million tonnes of CO2 per year. Without the coal phaseout, Ontario's emissions would be five per cent higher than 1990, instead of nine per cent lower. Now that all its coal-fired power has been shut down, the province will need to introduce strong policies for the other sectors.

We don't have long to wait to see how serious Canada's current federal government is about joining the climate fight. By the end of this month, the Liberals have promised to release their 2030 Emissions Reduction Plan.

Canada's climate pledge for 2030, under the global Paris Agreement, is to cut our oversized climate pollution at least 40 per cent below 2005 levels. That works out to 26 per cent below our 1990 level. As my chart above shows, the British, the Germans and the Europeans overall have already done that much — and more.

But decades of Canadian foot-dragging and broken promises, instead of pollution cuts, have left us still far behind and still heading the wrong way. To finally reverse course and try to catch up to our G7 peers, Ottawa will need to enact strong new climate policies. Our peers, like the U.K., have shown us clearly what kinds of climate policies work. How much worse are we going to let the climate crisis become before we start to act, too?

Well, if you plan to fail,

Well, if you plan to fail, you may as well fail big.
Canada's support (Liberal/Conservative/NDP, take your pick) for fossil fuel expansion ensures that Canada will continue to fall short of its inadequate targets for decades.

Canada's O&G industry also grossly under-reports its emissions of all types.
All emissions stats in the analysis above for Canada's O&G-producing provinces and for the nation as a whole are fictional. Actual emissions are far higher.
If you thought it was bad, it's actually worse.

I believe that optimism can

I believe that optimism can lead to higher quality critiques and policies. Why be optimistic when the messages, both in published articles like Barry's and the related rebuttal, are so often in the negative that they do not motivate or inspire people, except to throw our hands up in the air?

Because there are very real alternatives, enough of them to be very positive indeed.

On the policy side, not as much, but there is still hope. Strategic voting has lead to the Liberal-NDP agreement and four years of stability after two successive minority governments. Strategic voting gives politicos -- especially those who want to build a legacy -- a powerful message that has the capability of overcoming incessant corporate lobbying until such time as we have proportionality in the national electoral system. We also need a truly viable national Green Party that bins its immature infighting in favour of working to influence a government under the such agreements. German Greens lead by example, and no doubt got to their position in government by consensus and compromise, not by demanding perfection.

I will not listen to those who advise me not to vote for either of the two largest progressive parties because they are flawed and have some (but not all) failed climate and environmental policies. The only choices left after that are to either split the vote by casting a ballot in the direction of absolute perfection or to not vote at all, meaning the worst of all governments can then seize power and decimate not just recent gains in climate and environmental policy but that will send Canada back to the 1950s or into extremism on social policy.

Furthermore, promoting ongoing advances in things like offshore wind, a national smart grid, better Hydro credits for independent solar and wind projects, green steel and cement, geothermal power, green hydrogen-powered fuel cells (Ballard still exists; Germany has submarines that run on this tech), regenerative forestry and agriculture (these alone are orders of magnitude better and much cheaper in capturing and sequestering atmospheric carbon into soils than traditional CCS), knowledge and human resources over 18th Century natural resource exploitation, efficacious urbanism ... these are the positive, inspirational and genuinely affordable on-the-ground projects that will get us to net zero quickly. Comparing the proven positive emissions and economic results of real projects like these to the fantasies of CCS, SMRs and the fossil subsidies = jobs myth is a more professional, illustrative approach than succumbing to a descent into a purely negative narrative.

Unfortunately, doomerism sells. So let's do the comparative charts and research on the economics, social attributes and science of the known policies, methodologies and technologies that are the most appropriate to lower our emissions and provide a counterpoint to the negation of hope.

Optimism needs to be grounded

Optimism needs to be grounded in reality. False hope is worse than doomerism, because it leads to complacency.
I do not find Mr. Saxifrage's data-based analyis negative or "doomerist". He presents the bare facts, plain and simple. And inarguable.
If the facts are grim and the outlook is bleak, the report on the facts will be grim and bleak. Anything else misrepresents reality.

Mr. Botta suggests that the analysis does not motivate or inspire people, but only makes them want to give up. On the contrary, the profound failure of climate leadership in this country should make Canadians angry. Anger is an excellent motivator for change. Get progressives out of their armchairs and into the streets. Demand change. Don't take no for an answer.

Botta: "Strategic voting gives politicos -- especially those who want to build a legacy -- a powerful message that has the capability of overcoming incessant corporate lobbying until such time as we have proportionality in the national electoral system."

Fuzzy logic. What message does "strategic voting" give PM Trudeau that would overcome the pressure of corporate lobbying? This presupposes that Trudeau wishes to free himself from corporate pressure. That he is not in fact their willing servant, hand-picked to do Corporate Canada's bidding. Any evidence?

Is proportionality in the offing anytime soon? Any realistic hopes for PR? Hope is nice, but this hope is empty. What would make the Liberals change their minds? Why would the Liberals make electoral changes that dim their chances of majority govt?

Botta: "these are the positive, inspirational and genuinely affordable on-the-ground projects that will get us to net zero quickly"

This ignores the elephant in the room. As long as the Liberals pursue fossil-fuel expansion, none of these small-ticket items bring us near net-zero. This prescription offers false hope.

The only way out of this trap is to terminate the Liberals' contract. Yes, even if it means going several steps back under the Conservatives for a term.
How else to get the message across to that climate failure, a litany of broken promises, betrayals, cynicism, and Trudeau's mockery of First Nations, etc. are unacceptable?
If you reward failure, betrayal, and broken promises, expect more of the same.
If progressives wish to encourage Liberals politicians to ignore them, by all means, keep voting Liberal.
If you want to break them of the habit, park your vote elsewhere or stay home.

The Liberals have progressive voters over a barrel. Progressives must re-assert control of nominally progressive parties, set them on the right track, and keep leaders and government accountable. There is no hope otherwise.
Short-term pain for long-term gain.