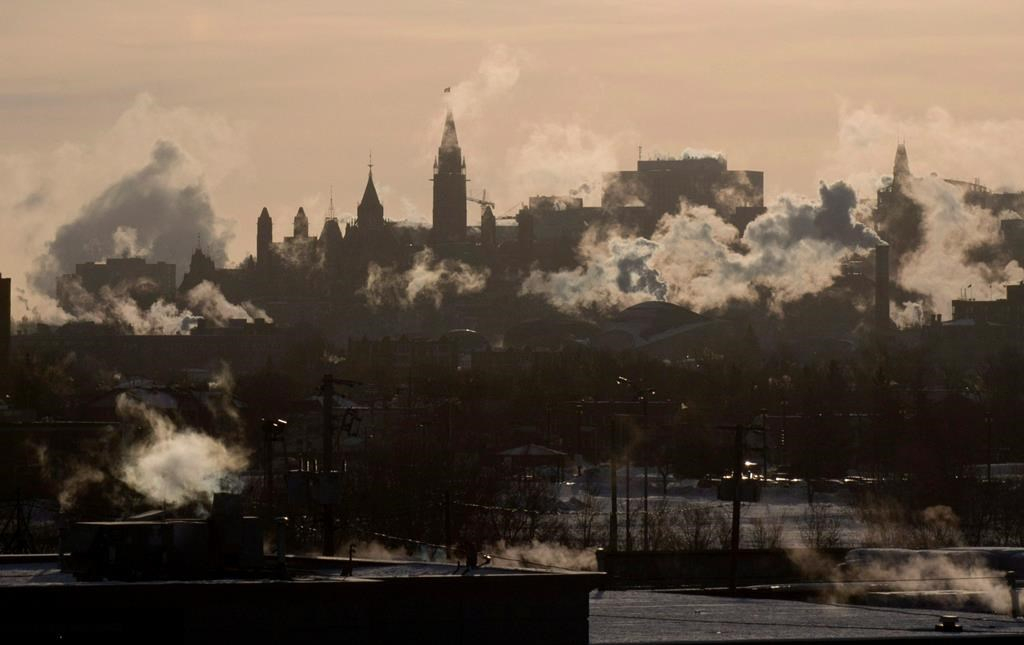 Winds blow vapour from buildings on the Ottawa skyline as temperatures hovered near -40C with wind chill in Ottawa, Thursday, January 24, 2013. Photo by: The Canadian Press/Adrian Wyld
Previous story

OTTAWA — Direct greenhouse gas emissions from federal departments are down almost 41 per cent in the last 17 years, hitting a target for 2025 well ahead of schedule.

But in an audit of Ottawa's "greening government" strategy, environment commissioner Jerry DeMarco said Canada still isn't reporting on its indirect emissions, nor does it include Crown corporations in its reporting or planning.

"Five years into the strategy, efforts to reduce emissions are not as complete as they could be," he said Tuesday.

The strategy unveiled five years ago aims to get to net-zero emissions by 2050 across federal operations. The plan includes energy-efficient upgrades to buildings, buying electric vehicles and encouraging suppliers to report on and cut their own carbon footprint.

The first target is to get emissions from federal departments with substantial building or fleet operations down by 40 per cent compared to 2005 levels by the end of 2025. There are now 27 departments included in that list.

The Treasury Board Secretariat, which is overseeing the plan, reported in mid-March that emissions in that bucket fell to almost 1.1 million tonnes in 2020-21, down 40.6 per cent from more than 1.8 million in 2005-06.

That means federal emissions are already below the first target, though the numbers may rebound this year because pandemic-related lockdowns and slowdowns are largely over.

Emissions from natural security and safety operations within the Department of National Defence, the Canadian Coast Guard and the RCMP are included in a different bucket. Those emissions were 844,000 tonnes in 2020-21, down slightly from 849,000 in 2005-06.

Together, direct emissions of 1.9 million tonnes put the federal government among the top 30 single-biggest greenhouse gas emitters in Canada, representing about 0.3 per cent of the country's total emissions.

Indirect emissions, including business travel, those produced by companies doing work for the government and commuting by employees, are in a third category. They do form part of the government's plan, with policies to encourage workers to use transit or work remotely, for example. But within that bucket, the government has only reported on government business air travel.

DeMarco said cutting direct departmental emissions 40 per cent is great, but that's just a "small portion of the pie."

"There's two big things missing, and this constitutes the majority of the federal government's emissions," he said. "The two things that are missing are indirect emissions from those departments as well as Crown corporations."

Crown corporations are only asked to voluntarily report their emissions. DeMarco's audit found Canada Post, Trans Mountain and Via all did so, and collectively emitted 397,000 tonnes.

DeMarco is also concerned about a lack of clear reporting on exactly how the government is achieving its reductions and at what cost.

Only eight of the 27 departments involved in the strategy had created an emissions reduction plan. Those departments cover 81 per cent of departmental emissions, including Defence, which accounts for more than half of the government's direct emissions.

"We looked at National Defence, the largest emitter in government, and found that there was no clear information about how the department's efforts were contributing to the overall reduction target," DeMarco said.

He said the lack of detail makes it hard for Canadians and members of Parliament to track progress "and whether Canada is actually being the global leader in greening government that it has set out to be."

The government takes issue with DeMarco's assertion that it doesn't track costs and savings. In its reply to the audit, the Treasury Board of Canada Secretariat said departments report capital expenses in the government's estimates and public accounts reports, and it analyzes the costs before a project begins.