By Becky Rynor | Opinion | April 27th 2022
#3 of 7 articles from the Special Report: One small thing: Taking action in the climate crisis 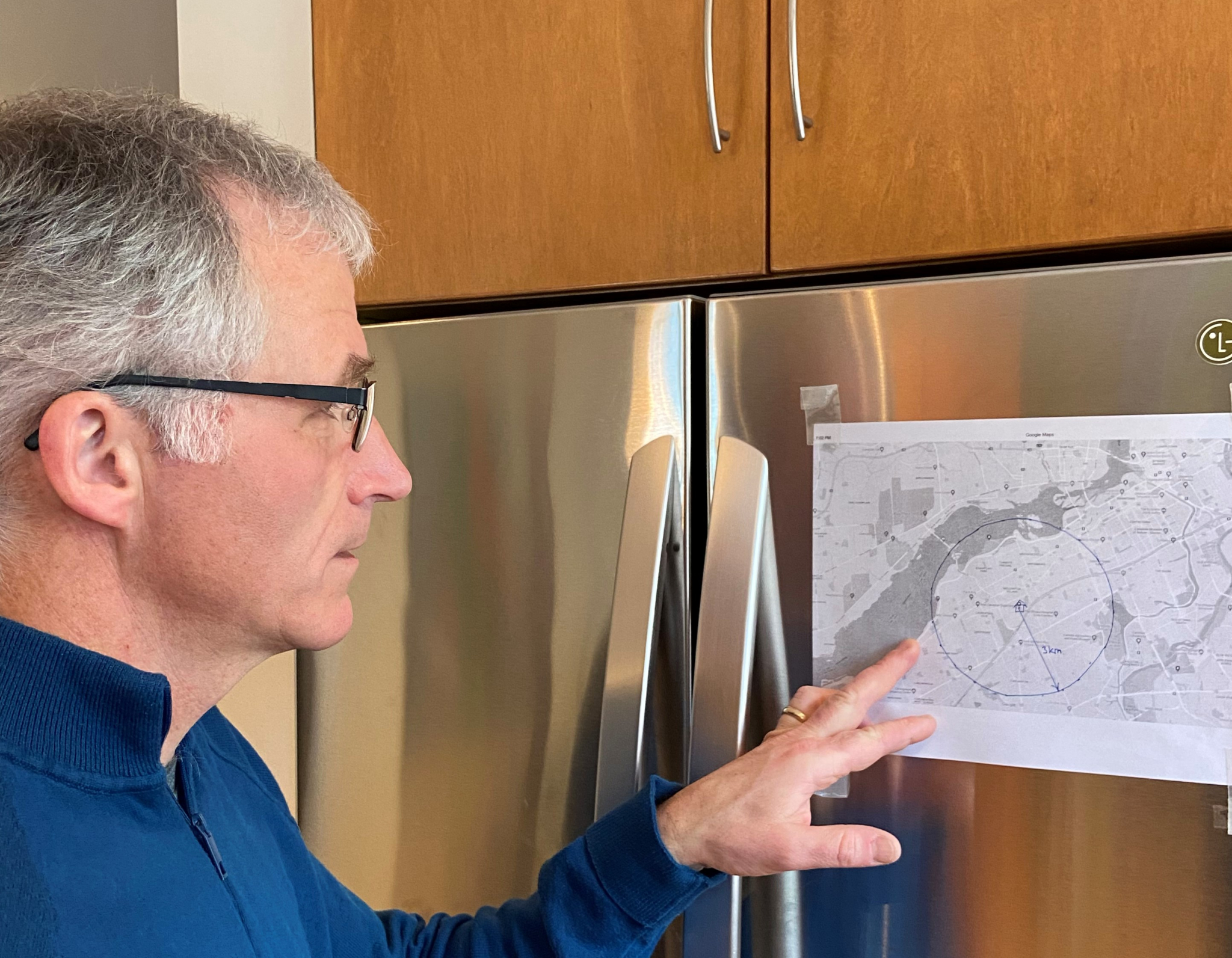 Alisdair McLean is not looking for directions. The map marks off a three-kilometre radius around his Ottawa home. If his destination is in that circle, he leaves his car in the driveway and walks. Photo supplied by Alisdair McLean
Previous story

Whenever Alisdair McLean heads out to do errands, meet colleagues or grab coffee with a friend, he checks the map prominently posted on his refrigerator.

He’s not looking for directions. The map marks off a three-kilometre radius around his Ottawa home. If his destination is in that circle, he leaves his car in the driveway and walks.

“Just the other day I discovered that Preston Street (in Ottawa’s Little Italy) is closer than I thought: 2.4 kilometres,” he says. “So, I walked there to meet someone for coffee. It’s funny how for years I thought it was so much farther away.”

Although he admits he’s “not 100 per cent compliant.”

“If I’m doing a big grocery run, I drive. Once I walked home with a 35-pound bag of dog food. I doubt I’ll do that again!”

But since posting the map on his fridge, McLean says his shopping routine has also changed.

“I’m less likely to depend on one really big excursion to the grocery store every once in a while,” he says. “Now I’m more likely to walk and pick stuff up as we need it.”

Environment and Climate Change Canada estimates there were more than 25 million light-duty/passenger vehicles — cars, light-duty pickups, minivans and sports utility vehicles — on Canadian roads in 2019. That makes them a huge contributor to air pollution, which the federal department says “has major adverse impacts on the environment and the health of Canadians.”

According to the Criteria Air Contaminants Summary list of common air pollutants, passenger vehicles account for a considerable proportion of the total national transportation emissions, including:

More exercise and spiralling gas prices provide added incentives to leave the car at home. However, McLean says posting the map on his fridge “was entirely driven by trying to do something for the environment.”

Alisdair McLean is not looking for directions. The map marks off a three-kilometre radius around his Ottawa home. If his destination is in that circle, he leaves his car in the driveway and walks. #OneSmallThing #ClimateCrisis

“We can all find something doable and make it part of our lives,” he says. “This is habit-forming. It’s like you check the weather before you put on a coat or boots to go outside. Likewise, you check the map to see if your destination is within that 3K radius.”

The additional walking has also had an unanticipated benefit. “Because I am a runner, I don’t stop and talk to people. I just run,” McLean says. “It’s a very isolating exercise. But to walk to the grocery store more often, the pharmacy, or wherever, you run into other people. You stop and chat. There’s a social component to it which I appreciate.”

Heres how to make one of

Heres how to make one of those 3 K or whatever distance you like maps. Goggle your area of town - Copy the page you are on by Screen capture. Look down at the very bottom left side and you will see: [_____] 500m thats the measurement for distance symbol. 1 Kilometere in this case would be 2 of those measures. Take a ruler and figure out the distance you want. Cut a string to that same measure. Then simply put a pin in the point of the map where you live - use the string with a pen on the end to go round in a circle. Thats your map!