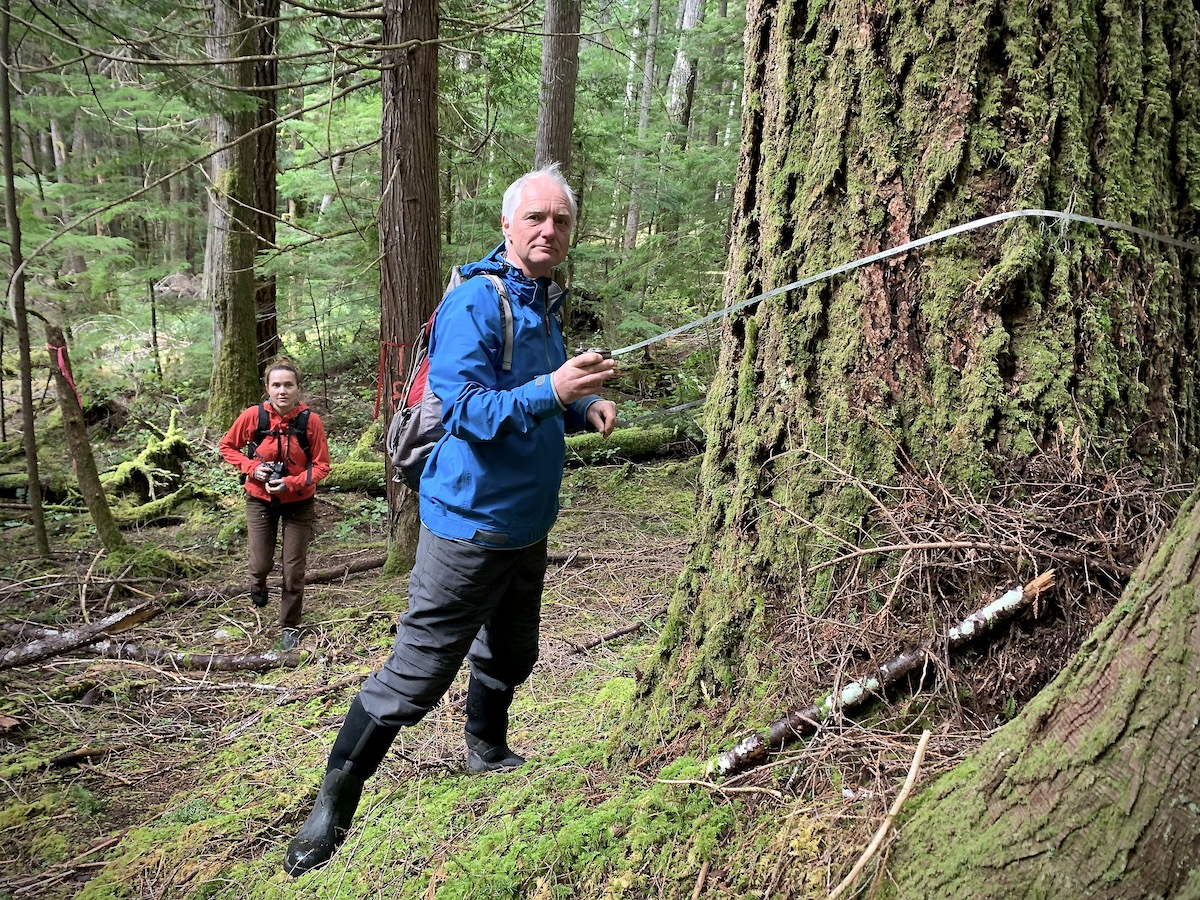 Cortes Islanders Kai Harvey and Mike Moore are mapping and measuring big trees in an attempt to save them from being logged by Mosaic Forest Management. Photo by Rochelle Baker
Previous story
Next story

Lisa Ferentinos wades through underbrush and clambers up a rock bluff before descending into a small ravine dominated by a cluster of old-growth cedars cloaked in moss and lichen.

“I get sad thinking they might be gone soon,” Ferentinos said. “But then I decide that’s just not going to happen.”

She’s one member of a tiny B.C. island community preparing for a potential tussle with logging giant Mosaic Forest Management, which recently announced a three-year plan to restart harvesting timber on Cortes after a prolonged absence.

Slogging through the brush, Ferentinos is part of a small advance team ground-truthing Mosaic’s privately owned cutblocks — counting and measuring the biggest trees and mapping them along with important wetlands, water courses and other sensitive habitat.

“We’re doing an inventory of what’s at risk of being lost,” said Mike Moore, a longtime naturalist on the B.C. island who is also surveying the forests.

Big trees and contiguous mature forest on the island are scarce because most of the best and easily accessible timber has been stripped away over 130 years of logging, he said.

“Having so little of that large second-growth, and occasionally first-growth, left on the island, that stuff’s precious and we need to know where it is,” Moore said, noting Mosaic has promised not to log old-growth groves of more than one hectare.

“We need to know where those stands are because there’s no point trying to hold Mosaic to account after they’ve logged it,” he said.

The company has provided rough locations and draft maps of the cutblocks it intends to log and also promised not to harvest trees that are more than 200 years old, avoid individual old-growth trees if operationally possible, and meet or exceed the more stringent provincial regulations around wetland setbacks normally reserved for logging operations on Crown land.

However, the company hasn’t yet provided specifics on its harvesting plans, and protecting trees two centuries and older is cold comfort as very few of those trees remain, said Moore.

Cortes, with its rocky bluffs and thin topsoil, needs to retain large swaths of mature second-growth at the heart of the island, he said. Not only to cultivate ancient trees and ecosystems it sorely lacks, but to maintain the island’s core watersheds and aquifers while also protecting wildlife and biodiversity.

Ferentinos agreed, noting the forests act like sponges to protect watersheds vital to the community.

“This is a small rocky island. If we mess up our water sources, we won’t have agriculture (and) we destroy fisheries.”

There are certainly two areas of long-standing concern for the islanders, Moore said.

One is the deliciously named the Delight watershed. It features a namesake lake, a tranquil beaver pond, a respectable selection of large Douglas firs, red cedars and the occasional Sitka spruce, as well as birdsong and bright yellow skunk cabbage flowers thrusting up from black mud and water in ravine bottoms.

The other — a former flashpoint of protest — is the Basil Creek watershed, which feeds one of the four remaining salmon-bearing streams on the island.

The community, in partnership with the province and the federal Department of Fisheries and Oceans (DFO), has invested a lot of time, money and effort to enhance and restore Basil Creek, Moore said.

And islanders have shown they’re willing to go to great lengths to protect imperilled salmon streams.

The last time industrial logging was slated in the watershed by Island Timberlands in 2012 — now managed by Mosaic — islanders blockaded the roads into the cutblocks — with some protesters lying directly in the way of trucks, he said.

“Island Timberlands walked away saying Cortes was socially inoperable, and things have been relatively quiet since,” Moore said.

However, islanders aren’t necessarily preparing to do tree-sits or roadblocks just yet, he said. They are waiting to hear more details from Mosaic, which said it plans to hold open houses in coming weeks and give cutblock tours.

“There are a lot of cards on the table right now,” Moore said, noting there is some community support for timber harvesting as long as it's done more sustainably, holistically and addresses ecosystem concerns.

“Ideally, we are looking for solutions that are acceptable to everyone,” he said.

The best alternative might be for the community to buy the land, protect old-growth and sensitive ecosystems and merge areas appropriate for harvesting with the Cortes Community Forest, said Moore and Ferentinos. But that likely involves a very big price tag.

In the meantime, hundreds of residents have sent a community letter to Mosaic outlining the minimum conditions under which they’d support timber harvesting on the island.

The missive calls on Mosaic to preserve any trees older than 140 years, noting they are “irreplaceable.” The company also shouldn’t harvest or build roads in areas where winter water collects or that would harm wetlands.

And lastly, Mosaic should drop its yearly cut to less than 20 per cent of the volume of wood growing annually in the island’s harvest land base to allow forests to increase and age over time.

The island community only boasts a population of around 1,000 residents, but 480 people have sent off a letter, Moore said, adding a community meeting outlining the island’s vision of forestry has been organized and Mosaic representatives are invited.

“It’s being pitched as a celebration and respectful conversation. It’s not a shouting match,” Moore said.