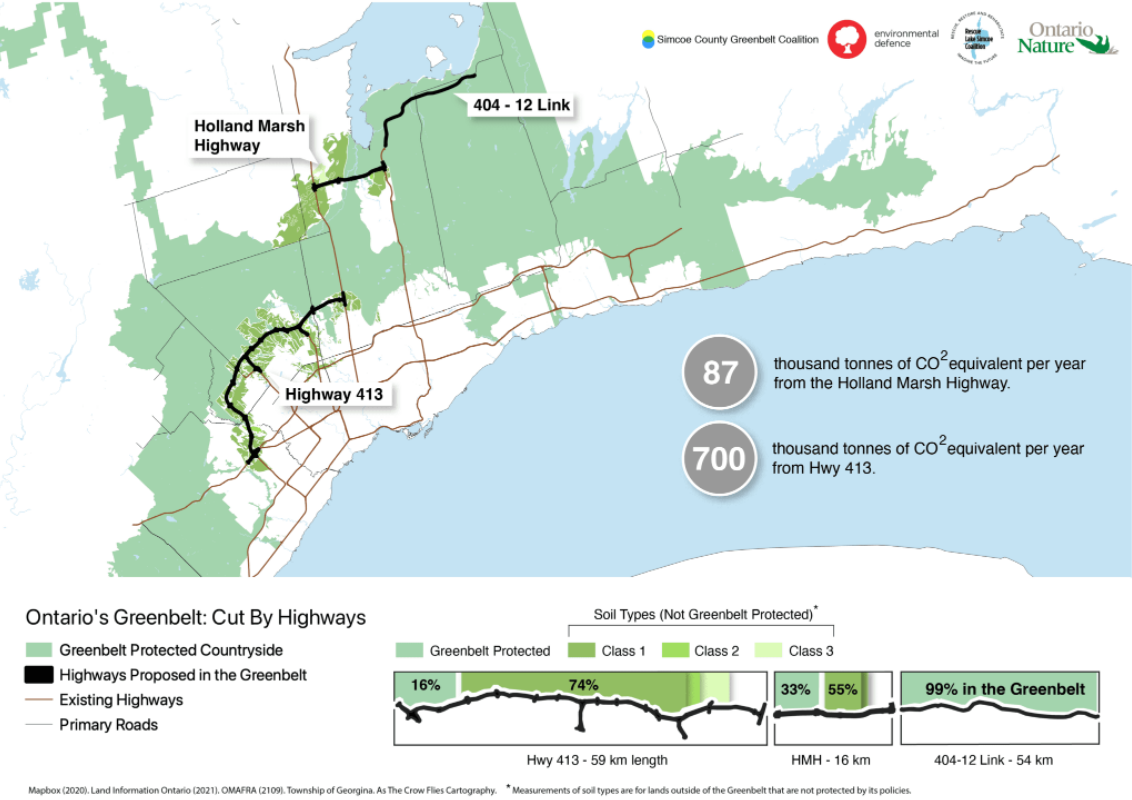 A coalition of Ontario environmental groups is calling on provincial parties vying for power in the upcoming election to make it illegal to pave over the Greenbelt.

Premier Doug Ford has vowed to see through major highway construction projects, including the Bradford Bypass south of Lake Simcoe and Highway 413, which would run from Vaughan to the border of Brampton and Mississauga. The Progressive Conservative government has also slated Highway 404 for an extension along the southeast shores of Lake Simcoe.

The current law protecting the Greenbelt allows for infrastructure construction, including highways.

Environmental Defence, along with Ontario Nature, the Wilderness Committee and two community groups dedicated to protecting Lake Simcoe said in a statement that “superhighways” threaten farms, forests and wetlands along the Greenbelt.

“These highways would also increase pressure to allow new industrial, commercial and residential development along them, while also crossing and polluting hundreds of waterways, fragmenting forests and farms, filling in wetlands and creating a death trap for many wildlife species,” a joint statement noted.

“Ontario drivers are tired of sitting in bumper-to-bumper traffic every time they go to work or drive their kids to hockey practice,” Ford spokesperson Ivana Yelich said in an email. “Gridlock grinds our roads and highways to a halt, costs our economy billions of dollars, and keeps commuters idling in congestion and away from their families.”

Studies by the previous Liberal government, which considered and then scrapped the projects, suggested the highways would only shave seconds or minutes off, in part because bigger highways tend to simply draw more vehicles and become gridlocked again.

A coalition of Ontario environmental groups is calling on provincial parties vying for power in the upcoming election to make it illegal to pave over the Greenbelt. #ONpoli

In a request for comment, the Ontario Liberals said the Ford government's “record on the environment is abysmal.”

“Their priority is letting their rich buddies bulldoze the Greenbelt and build highways like the 413 that will only lead to more greenhouse gas emissions and congestion. We do not believe that building new multi-lane highways through the Greenbelt are the answer to relieving gridlock and keeping people moving,” read a statement that promised to stop Highway 413 and invest $10 billion in schools.

“We are committed to making Ontario a place to grow again by protecting and expanding the Greenbelt and we will have more to say about our environmental plan very, very soon,” the statement read.

“We need to stop the sprawl and protect the nature that protects us from the impacts of the climate crisis,” said Schreiner in a statement.

The NDP did not respond by deadline.

The rule of law means nothing

The rule of law means nothing as long as Ford is in power.

If he/they don't like it, they manufacture a way to subvert it.

There's a protected wildlife area up here, just outside of North Bay--endangered species. So, no construction allowed, in law.

There's a brand-spanking enormous new casino sitting on that land now. One of their AZOs, or whatever they call them--Ontario: open for any damned business you want, and to hell with the environment and the people.