How an Indigenous-led conservation effort saved a caribou herd 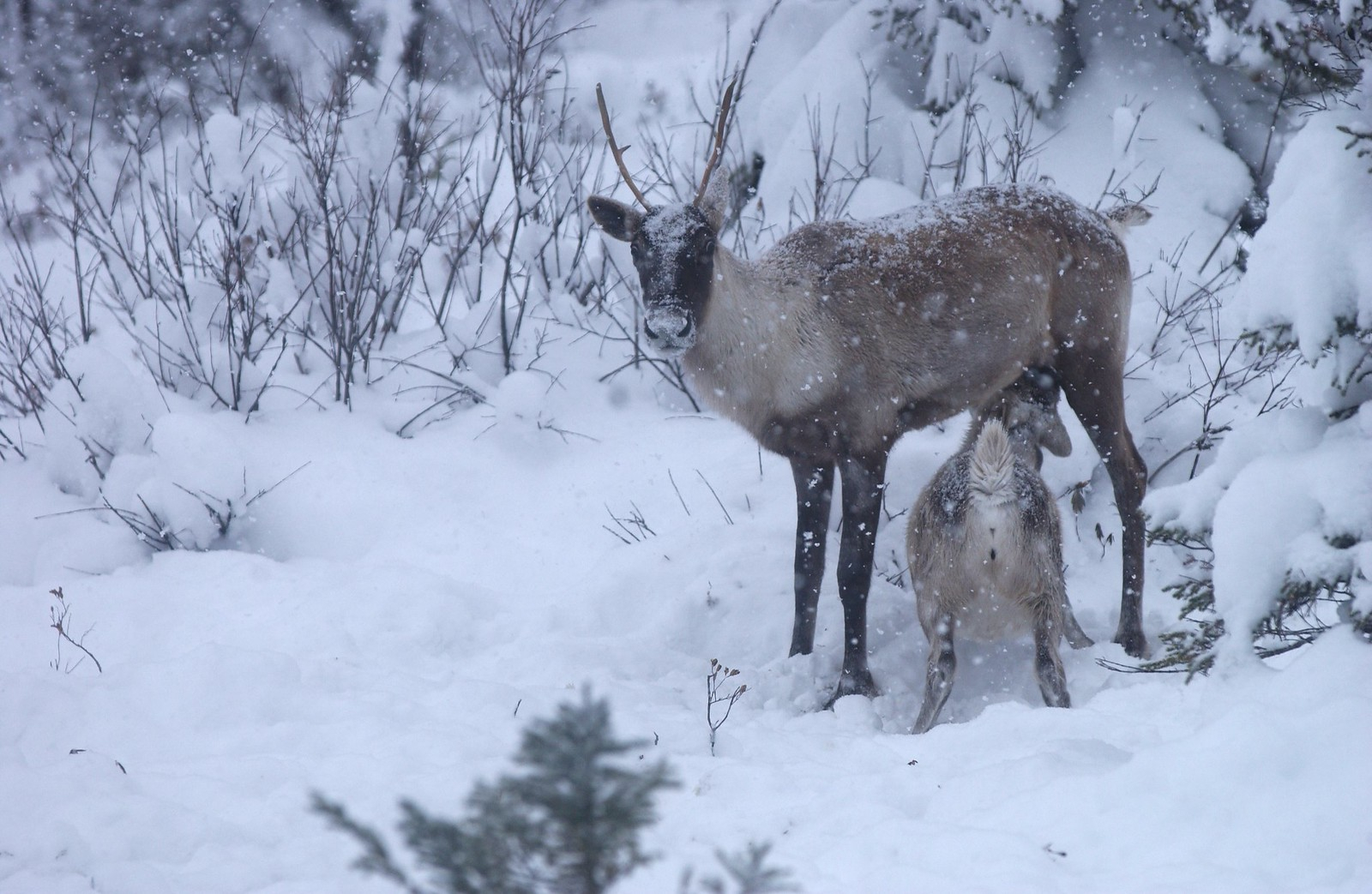 Caribou herds, once plentiful in the region, have been decimated by habitat fragmentation and an increase in predators due to loss of old-growth forests. Photo by peupleloup / Flickr (CC BY-SA 2.0)
Previous story

Caribou, it turns out, can be fussy. “They’re picky about what they eat,” says Carmen Richter, a biologist and citizen of the Saulteau First Nation in British Columbia. “They definitely let us know what’s acceptable.”

For nine years, Richter has been a part of an intensive caribou recovery effort, a collaboration spearheaded by the Saulteau and West Moberly First Nations, neighbouring communities that live across a lake from one another, a few miles north of Chetwynd, B.C.

Richter is in charge of gathering lichen for the caribou cows and calves that spend each spring in maternal pens, enclosures where they are kept safe from predators during the vulnerable weeks leading up to and after birth. Each year, members of the Saulteau deliver a semi-truck trailer full of lichen to the 30-acre pen to supplement the animals’ diets, and over the years they’ve learned about the animal’s predilections. “They love mushrooms,” Richter says. “Mushrooms are a big bonus for them.”

While the maternal pens have brought the animals and humans closer together than ever before, the relationship between the area’s Indigenous people and the caribou is millennia-old. “We have always been a part of each other’s lives,” says Roland Willson, chief of the West Moberly First Nation. “If you couldn’t find an elk or a moose, you could always get a caribou.” The caribou have provided much more than meat for his people, he adds: “In our culture, just about the whole caribou is used. Bones are made into fleshing tools, hide is used to make clothing and drums, and velvet from the antlers is a powerful medicine.”

“A sea of caribou” once flowed across this region, according to West Moberly elders, but the extraction of natural resources — coal, oil, gas, and timber — has sliced up caribou habitat with pipelines, power lines and roads. Old-growth forests have been replaced by young, grassy ecosystems, attractive to white-tailed deer and moose, animals that in turn attract more predators like wolves, bears, and cougars to the landscape.

According to a paper published last month in Ecological Applications about the Indigenous-led recovery effort, “increased predator populations is a leading cause of caribou declines.” Between 2000 and 2017, 10 subpopulations of North American caribou were extirpated, or wiped out, including the last herd in the Lower 48 states.

But for the Saulteau and West Moberly First Nations, caribou declines have been obvious since at least 1968, when construction was completed on a hydroelectric dam. The reservoir it created — the third-largest manmade lake on the continent — scattered caribou herds and disrupted migration routes. By the 1970s, both nations had passed a traditional law not to hunt the animals. “We thought maybe if they were left alone, they would come back,” Willson says.

An innovative collaboration between two First Nations in B.C. protects the most vulnerable animals. #KlinseZa #CaribouGuardians

But they didn’t come back. Caribou numbers fell so precipitously during the latter half of the last century that what had once been a “sea of caribou” was more like a smattering of puddles. In 2013, the last surviving member of a herd known as the Burnt Pine died after falling into a coal pit. Around the same time, an aerial count revealed the nearby Klinse-Za herd had dwindled to 38 animals.

For the nations, that moment was a turning point, according to Naomi Owens-Beek, a biologist and the treaty rights and environmental protection director for the Saulteau First Nation. “Either we were going to see another herd extirpated,” she says, “or we were going to do something.”

That something started with the first-ever caribou forum that brought together government and industry representatives, University of British Columbia scientists, and citizens of the nations, including elders, to discuss what could be done to save the Klinse-Za. The group devised a plan that incorporated both short- and long-term strategies. They would work to recover the population of the Klinse-Za herd through wolf reduction and maternal penning while also beginning a years-long campaign to create a federally protected habitat for the caribou.

The first phase, predator reductions, began in 2013. The provincial government hired contractors to carry out wolf culling from helicopters (a method unpopular with the general public) while the nations tackled wolf reductions on the ground. “We trap and we use the fur,” says Willson. “It’s not our way to just destroy something.” With wolf populations thinned to a more sustainable level, the team got to work on the maternal penning phase of the project.

In March 2014, the relocation effort began. First, a team of wildlife experts tranquillized, trapped and then transported via helicopter as many caribou cows as they could. The 10 animals were carefully delivered one-by-one to a staging area and then loaded onto a sled attached to a snowmobile to be introduced to the maternal pen without the disruptive wind and roar of a helicopter.

Owens-Beek’s job was to sit in the sled and hold the caribou still in case it began to wake from its sedation before the ride was over. “The whole time, I’d just be praying that she would have a good life — and that she would be pregnant,” the biologist says.

Once the cows were safely in the pen, Indigenous team members known as “caribou guardians” kept watch over the enclosure 24 hours a day, living in pairs for one week at a time in an austere alpine cabin. The guardians monitored the animals’ health, checked the fence line for predators, and fed the caribou from the many bags of lichen that Richter and her crews had gathered.

As calves were born, guardians measured and collared them, and ensured cows recovered properly. When the calves were six weeks old, the team released the animals and their mothers back into the wild.

The first year, 10 calves ambled out of the enclosure. The next, six. Today, the herd numbers 110 caribou, a three-fold increase since the project began less than a decade ago. While the effort has been a success for the Klinse-Za subpopulation, maternal penning remains an expensive and time-intensive method that might not work for every herd, says Layne Adams, a research wildlife biologist with the United States Geological Service-Alaska. According to Adams, only two of the four penning projects that have taken place in the U.S. and Canada have been successful.

“There is a lot of randomness involved in maternal penning,” he says, such as a severe weather event, a predator break-in, or the number of pregnant cows that can be captured. “That randomness can play in your favour or not.”

While maternity penning can be effective for a herd “really on the ropes,” Adams says that “habitat protection has to be the crux of any recovery effort. Maternal penning and wolf control are just keeping them on the landscape until it can be recovered.”

To that end, the long-term goal of the Klinse-Za project came to fruition in February 2020, when the governments of the Saulteau and West Moberly First Nations, British Columbia, and Canada signed a landmark agreement to preserve more than 3,000 square miles of caribou habitat in central B.C. The agreement also guaranteed funding for the ongoing caribou guardian program. Chief Willson says there’s still a lot of work to be done when it comes to land-use policy as well as other caribou herds currently on the brink of extirpation, but that the agreement “gives us hope. It means that help is on the way.”

It may take many more years for the Klinse-Za herd to be self-sustaining, and for the nations to be able to once again hold a caribou hunt, a practice that’s not just a cultural tradition but a treaty right guaranteed to them under provincial law. Still, Willson says his community is ready to do whatever it takes to save the species, for no other reason than it’s the right thing to do.

“Caribou have always been there for us when we needed them,” he says. “It’s time to be there for them.”