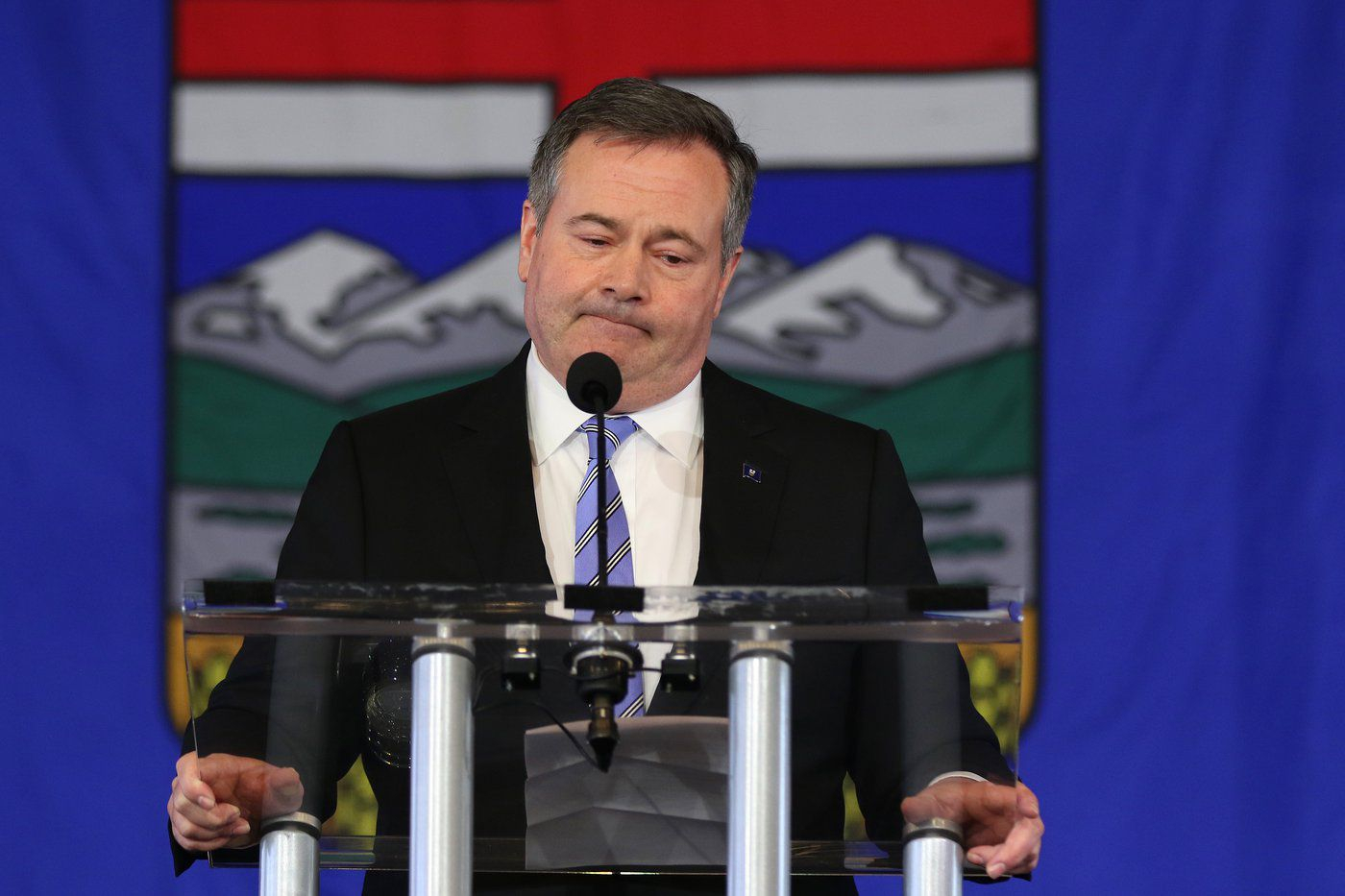 Alberta Premier Jason Kenney speaks in response to the results of the United Conservative Party leadership review in Calgary on Wednesday, May 18, 2022. Photo by The Canadian Press/Dave Chidley
Previous story
Next story

Premier Jason Kenney threw Alberta politics into a tailspin Wednesday when he narrowly won a United Conservative Party leadership review vote only to announce he was quitting the top job anyway.

To gasps of surprise from a few hundred supporters at an invite-only event in Calgary, Kenney said the 51.4 per cent support he received was not enough to stay on.

“The result is not what I hoped for or frankly what I expected,” Kenney said at the Spruce Meadows equestrian centre before a crowd that included several cabinet ministers.

“While 51 per cent of the vote passes the constitutional threshold of a majority, it clearly is not adequate support to continue on as leader.

“That is why tonight I’ve informed the president of the party of my intention to step down as leader of the United Conservative Party.

“We need to move forward united. We need to put the past behind us. And a large number of our members have asked for an opportunity to clear the air through a leadership election.”

His press secretary, Justin Brattinga, said Kenney is to remain as party leader until an interim leader is chosen. A caucus meeting is to be held Thursday.

Brattinga added that Kenney plans to keep his legislature seat.

Kenney has said anger from party and caucus members over decisions he made to limit personal liberties during the COVID-19 pandemic ignited the anger against him that led to open criticism of his leadership and ultimately the underwhelming vote of support in the review.

'Not adequate support:' #Alberta Premier @jkenney to step down as #UCP leader. #ABPoli

“It’s clear that the past two years were deeply divisive for our province, our party and our caucus, but it is my fervent hope that in the months to come we all move on past the division of COVID,” he said.

Kenney has been premier for three years and was the driving force behind the creation of the United Conservatives.

A former Conservative MP and cabinet minister in Stephen Harper’s government, Kenney quit federal politics to win the leadership of Alberta’s Progressive Conservatives. He then joined his party with the fellow right-centre Wildrose Party in 2017 to create the United Conservatives.

The UCP went on to defeat the NDP in the 2019 provincial election, with Kenney as premier.

Brian Jean, the leader of the Wildrose who lost to Kenney in the inaugural UCP leadership race, returned to the house earlier this year as a backbench UCP MLA on a promise to try to oust Kenney as leader.

Jean said last week Kenney needed a strong endorsement in the review to stay in the top job. On Wednesday, he tweeted: “No one understands political traditions and conventions more than Jason Kenney and I want to thank him for his decent and honourable concession.”

I want to thank Jason Kenney for his quarter century of public service for Albertans & Canadians. As I have said for several weeks now, no one understands political traditions and conventions more than Jason Kenney and I want to thank him for his decent and honourable concession.

Jean previously announced he would run for the top job if Kenney quit, as has another former Wildrose leader, Danielle Smith.

Smith, in a statement, said, “The result we have witnessed today is a truly grassroots resolution. The membership of the United Conservative Party is hungry for a leader that will be responsive and fight for the interests of Alberta."

Todd Loewen, the first UCP member to publicly call for Kenney to quit over a year ago, said the party now has a chance to renew itself and mend some fences.

“Now it’s time to get things back on track in Alberta,” said Loewen.

Erika Barootes, the founding president of the party, said it will be a difficult and expensive process picking a new leader, with a year to go before the May 2023 provincial election. “It leaves a lot of uncertainty on the table."

In Calgary, Whitney Issik, the associate minister of status of women, said, “The premier has spoken, the results have come in, he's made his wishes known. No other decisions can be made until we have a caucus meeting."

“At this time, we are united in the fact that ... Albertans priorities are the most important priorities for all of us.”

Political scientist Lori Williams said it became clear to Kenney that with 51 per cent support he didn’t have the moral authority or political clout to bring his opponents to heel.

“I think he just saw, even for tenacious Jason Kenney, it was just not going to happen. The fights were going to continue. It was going to get worse.”

Kenney received 17,638 votes of support from 34,298 ballots cast. If he had received less than 50 per cent plus one, he would have had to quit under party rules.

Normally, leaders consider 75 to 80 per cent or higher the minimum credible mandate to continue leading their party.

Kenney had long suggested he would accept a slim majority, saying the voting pool was skewed by last-minute members interested in scuttling his big-tent conservative party.

The review took on heightened importance over the past year as Kenney was buffeted by poor polling numbers, sluggish fundraising and open dissent from some in his party and caucus.

It was also punctuated by controversy. It had already been delayed by a year when it was set for an in-person ballot on April 9 in Red Deer, Alta.

When 15,000 members signed up — five times more than expected — the party said it couldn’t handle the logistics and moved to a mail-in ballot open to all 59,000 members.

Critics said the change was made to give Kenney the edge, as it appeared he was going to lose the in-person vote.

Elections Alberta is also investigating allegations of illegal bulk buying of memberships in the review. And the party remains under investigation by the RCMP over allegations of criminal identity fraud in the 2017 contest that saw Kenney elected leader.

Kenney had made it clear that the vote and open dissent had become a "soap opera" distracting the party from preparing for the election.

Two backbenchers who openly criticized Kenney last year —Loewen and Drew Barnes — were voted out of caucus and sit as Independents. In recent weeks, backbenchers Jason Stephan, Peter Guthrie and Jean had been the most vocal. They openly urged the premier to resign for the good of the party.

Opponents in caucus have said the dissatisfaction was not just over COVID-19 policies, but also over Kenney’s management style, which they deemed to be top-down, dismissive and undemocratic. They said Kenney had not done enough to gain a better deal for Alberta with the federal government on shared programs.