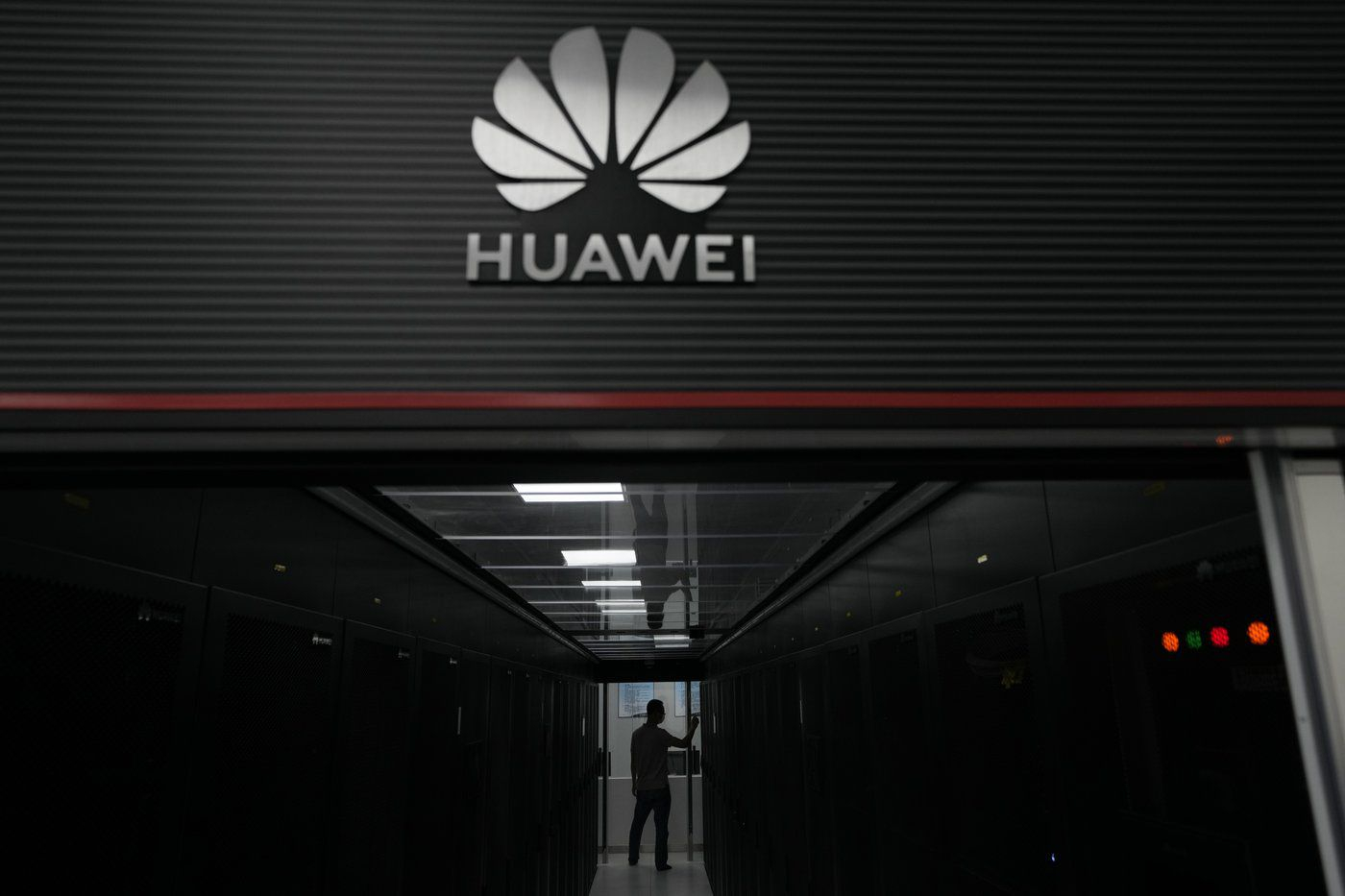 A technician stands at the entrance to a Huawei 5G data server centre at the Guangdong Second Provincial General Hospital in Guangzhou, in southern China's Guangdong province on Sept. 26, 2021. File photo by The Associated Press/Ng Han Guan
Previous story

"Telecommunication companies in Canada will not be permitted to include in their networks products or services that put our national security at risk," Innovation Minister François-Philippe Champagne said Thursday in Ottawa.

"Providers who already have this equipment installed will be required to cease its use and remove it under the plans we are announcing today."

Beijing is condemning the move as a form of "political manipulation" carried out in coordination with the U.S., which was aimed at "suppressing" Chinese companies in violation of free-market principles.

China will comprehensively and seriously evaluate this incident and take all necessary measures to safeguard the legitimate rights and interests of Chinese companies," the Chinese Embassy in Canada said in a statement posted on its website.

China commonly employs such language in commercial disputes, which often does not lead to a firm response from Beijing.

The development of 5G, or fifth-generation, wireless networks will give people speedier online connections and provide vast data capacity to meet ravenous demand as more devices link to the internet and innovations such as autonomous vehicles emerge.

The Opposition Conservatives and other critics have long pressed the Liberals to deny Huawei a role in building the country's 5G infrastructure.

They have said it would allow Beijing to spy on Canadians more easily.

Some say Huawei's participation could give it access to an array of digital information gleaned from how, when and where Canadian customers use internet-connected devices.

In turn, the theory goes, Chinese security agencies could force the company to hand over the personal information.

Huawei has steadfastly insisted it is a fiercely independent company that does not engage in espionage for anyone, including Beijing.

ZTE is a partially state-owned Chinese technology company that specializes in telecommunications.

"We will always protect the safety and security of Canadians. And we'll take any actions necessary to safeguard our telecommunication infrastructure."

Three of Canada's partners in the Five Eyes intelligence-sharing alliance — the United States, Britain and Australia — have already taken decisive steps to curb the use of Huawei gear in their countries' respective 5G networks.

The Liberal government and officials have been asked repeatedly over the last few years about Ottawa's 5G intentions.

"This has never been a race," Champagne said Thursday. "This is about making the right decision. This is about providing a framework to protect our infrastructure."

Rogers Communications, which is partnering with Ericsson, said Thursday's decision would not affects its plans.

Even so, the federal policy forbids the use of new 5G equipment and managed services from Huawei and ZTE. Existing 5G gear or services must be removed or terminated by June 28, 2024.

Any use of new 4G equipment and managed services from the two companies will also be prohibited, with existing gear to be pulled out by Dec. 31, 2027.

Champagne said the federal government will not compensate companies that need to remove the equipment from their networks.

The government plans to introduce legislation soon to formally implement the measures.

Alykhan Velshi, Huawei Canada's vice-president of corporate affairs, said the government wanted a headline saying it had banned the company from 5G.

"I think they got that headline," he said.

"But it hasn't changed the fact that there's still an extensive amount of Huawei equipment in the network now, there will be for the foreseeable future, and the mechanism by which they propose to implement that ban is a piece of legislation that not only has not been passed, it has not even been introduced."

On Thursday, the Conservatives criticized the Liberals for taking so long.

"Justin Trudeau's delay in banning Huawei has damaged our allies' confidence in Canada as a reliable ally and damaged the public's confidence that this government will defend the national interest," Conservative MPs Raquel Dancho and Gerard Deltell said in a written statement.

The New Democrats also said it was long overdue.

"During this time, the domestic telecom market has also been severely impacted as they were left in the dark about the future of 5G in Canada," NDP innovation critic Brian Masse said in a written statement.

"This new legislation will establish a framework to better protect the systems vital to our national security and give the government a new tool to respond to emerging cyberthreats."

Many believe the government delayed its 5G decision because of the dispute surrounding China's imprisonment of Michael Spavor and Michael Kovrig following the RCMP's arrest of Huawei executive Meng Wanzhou.

The two Canadians were arrested, imprisoned, charged and eventually convicted of spying in apparent relation for Meng's arrest on Dec. 1, 2018, on a U.S. extradition warrant. The Liberal government was clearly not interested in making a 5G decision that would anger Beijing and create any additional risk for the two men.

Meanwhile, the Trudeau government clung to the talking point that it was embroiled in a comprehensive security review of 5G that crossed departmental lines from Public Safety Canada to the Canadian Security Intelligence Service, the Communications Security Establishment, Global Affairs Canada, and Innovation, Science and Economic Development. Throughout it all, the government maintained that the safety and security of Canadians was its top concern.

Kovrig and Spavor remained in separate Chinese prisons until Sept. 24, 2021, when a U.S.-brokered deal led to their freedom after the U.S. Department of Justice abandoned its extradition case against Meng. She flew back to China from Vancouver on the same day as Kovrig and Spavor were released. Their respective airplanes took off at literally the same moment.

Throughout the affair, the Trudeau government had been under pressure by the Trump administration to ban Huawei because it viewed the Chinese company as a threat to U.S. national security. The Obama administration first flagged the company as a security risk more than a decade ago. Biden has maintained his country's aggressive posture toward China.

In 2017, the Donald Trump administration flagged China's national intelligence law as a major 5G security issue, saying it would allow Chinese communist leaders to compel companies such as Huawei to conduct cyberespionage on behalf of Beijing. Security concerns included allegations that Huawei equipment contained so-called back doors that could give Beijing the ability to meddle in the American power grid, banking system or other key infrastructure.

Huawei and the Chinese government have vigorously denied the accusations, saying the company poses no security threat. They maintained the U.S. was simply trying to stop the rise of China's premier telecommunications company.

Britain banned Huawei in stages. In January 2020, it allowed Huawei partial access to its 5G network, but said it still considered the Chinese telecom company a security risk that required special attention.

The U.S. tightened the screws in May 2020 when the Trump administration blocked non-U.S. companies from using U.S. components, including processor chips, in Huawei products without American approval.

In July 2020, Britain opted to exclude Huawei from its network, saying U.S. sanctions made it impossible to ensure the security of Chinese-supplied equipment.

— With files from Mike Blanchfield and Mia Rabson