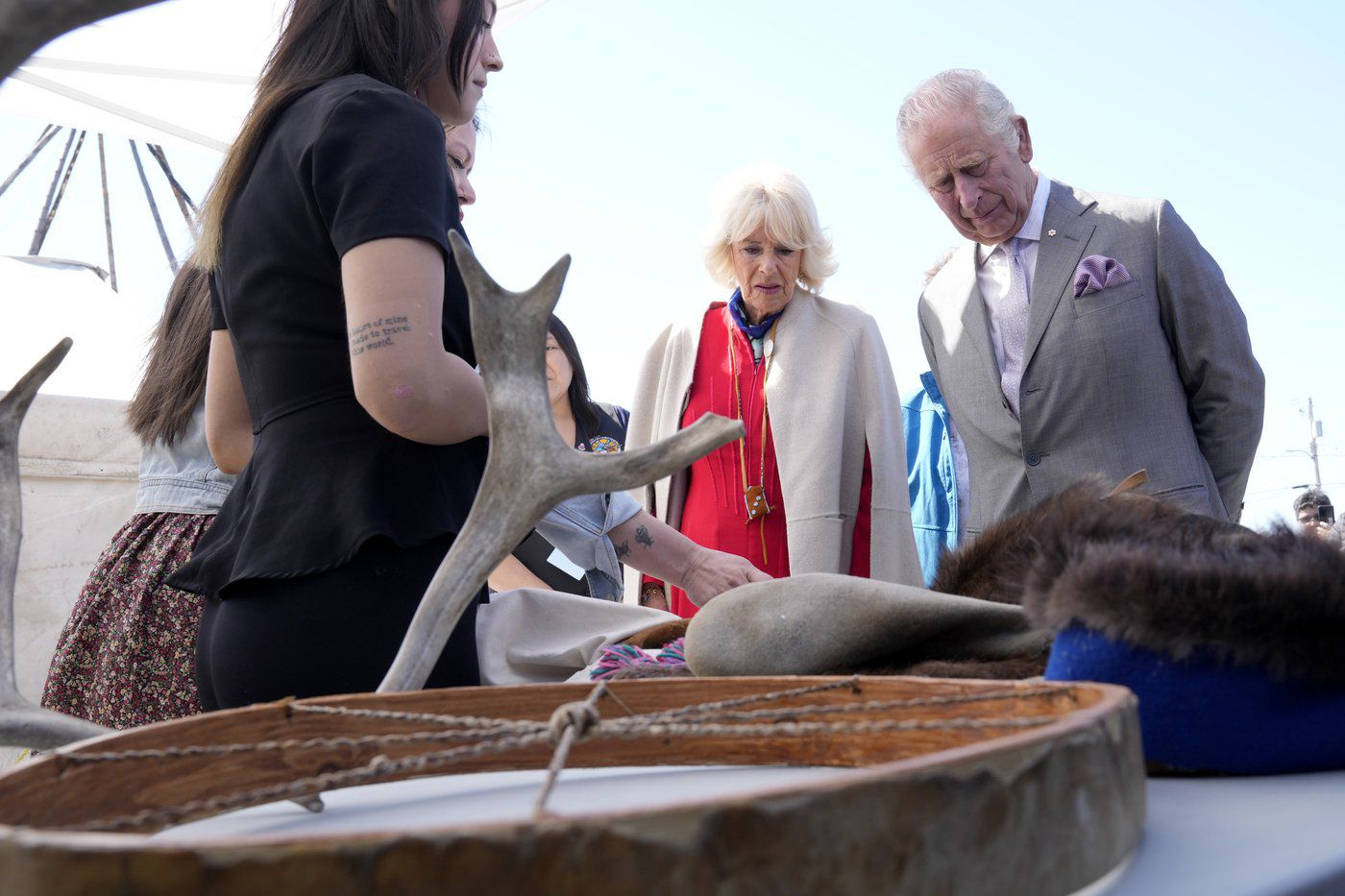 Prince Charles and Camilla, Duchess of Cornwall, second from right, look at a display of traditional hunting tools and clothing after arriving in Yellowknife, NWT, during part of the Royal Tour of Canada, on May 19, 2022. Photo by The Canadian Press
Previous story
Next story

Prince Charles says he and Camilla, the Duchess of Cornwall, were departing Canada with "heavy hearts" and a deeper understanding of residential schools after their royal visit wrapped in the Northwest Territories.

Charles said he was deeply moved by conversations with survivors who courageously shared their experiences of the schools during the three-day tour.

“I want to acknowledge their suffering and to say how much our hearts go out to them and their families,” Charles said Thursday night in Yellowknife in front of hundreds of people.

The couple recognized that their visit came at an important time for Canada, he said. The country has been reckoning with its history as possible graves continue to be found at the sites of former residential schools.

Earlier in the visit, leaders with the Assembly of First Nations and the Métis National Council requested an apology from the Queen, as head of the Church of England.

While not addressing that request, the prince said community members and leaders at every stop emphasized the importance of reconciliation.

“We all have a responsibility to listen, understand and act in ways that foster relationships between Indigenous and non-Indigenous people in Canada," he said.

It was a sentiment echoed by N.W.T. Premier Caroline Cochrane during a celebration to honour the Queen's Platinum Jubilee. She said she hoped the royal couple had the opportunity to learn and reflect on the culture and history of Indigenous people

"A key aspect of reconciliation is listening to each other," the premier said.

Crown-Indigenous Relations Minister Marc Miller said earlier in the day that while all effective power rests with the government, not with the Queen, he understands comments from the royals could be important to some Indigenous people.

"It's nuanced," he said. "There are some Indigenous Peoples ⁠ — much like non-Indigenous people ⁠ — who couldn't care less. There are many who have a profound deep connection to the Royal Family."

Charles and Camilla took part in ceremonies, cultural events and learned about Indigenous language as their visit wrapped up in the territory.

They were greeted by a large group at the Yellowknives Dene First Nation community of Dettah. The First Nation east of Yellowknife has a population of just over 200 people and dozens came out to shake hands with the couple and partake in a fire lighting ceremony.

Drygeese said her parents and grandparents would tell stories about when they met the royals during a tour in the 1970s when Prince Charles was a teen. She gave Camilla a medicine bundle to represent women in her family and their history together.

Some First Nation members did not support the visit, Drygeese said, but added that they understand the power of showcasing their community and culture.

Many of those who came wore orange clothing and other items with the words "every child matters" representing the legacy of residential schools.

Throughout the tour, the couple focused on connecting with Indigenous people and discussing climate change.

Charles walked along the partially melted shores of Great Slave Lake, the second-largest lake in the N.W.T., for an event highlighting the impacts of climate change on the Dettah Ice Road, which connects the First Nation to Yellowknife in the winter.

Climate change experts were there to explain how warming temperatures have shortened the seasons for ice roads, which are vital to isolated communities.

Dahti Tsetso, the deputy director of the Indigenous Leadership Initiative, told the prince how practising Dene culture takes care of the land.

“The land is a part of us and we are a part of the land," Tsetso said.

Charles said he had witnessed the devastating impact of climate change during his time in the North. It's clear that urgent and decisive action must be taken by all leaders, he said.

"We simply must learn practical lessons from traditional knowledge, through deep connections to land and water, about how we should treat our planet.

"And, above all, recognize the vital importance of taking into account the seventh unborn generation."

Earlier, Robin Weber opened a door to the Prince of Wales Northern Heritage Centre for Charles, just as she did more than 40 years ago when she was 11. The prince opened the museum and archival building in 1979.

“Welcome back,” she said to Charles with a smile.

Charles was also made an honorary Canadian Ranger at an event in Yellowknife. Rangers are a part of the Canadian Army Reserve in northern and isolated areas, and Prince William was bestowed the same honour during a previous visit.

The last royal visit to N.W.T. was in 2011, when William and Catherine, Duchess of Cambridge, were welcomed by large crowds during a one-day stop in the North.

Charles and Camilla began their tour Tuesday in Newfoundland and Labrador before they headed to Ottawa for a reception at Rideau Hall on Wednesday. The couple also attended a church service at a Ukrainian Orthodox cathedral and met with a family displaced by the Russian invasion.

Before leaving Yellowknife, the prince said he appreciated the warm welcoming across Canada.

"We will be closely following the next chapter in this country’s remarkable story – and doing so with the greatest affection and admiration for everything that Canada and Canadians stand for in the world."