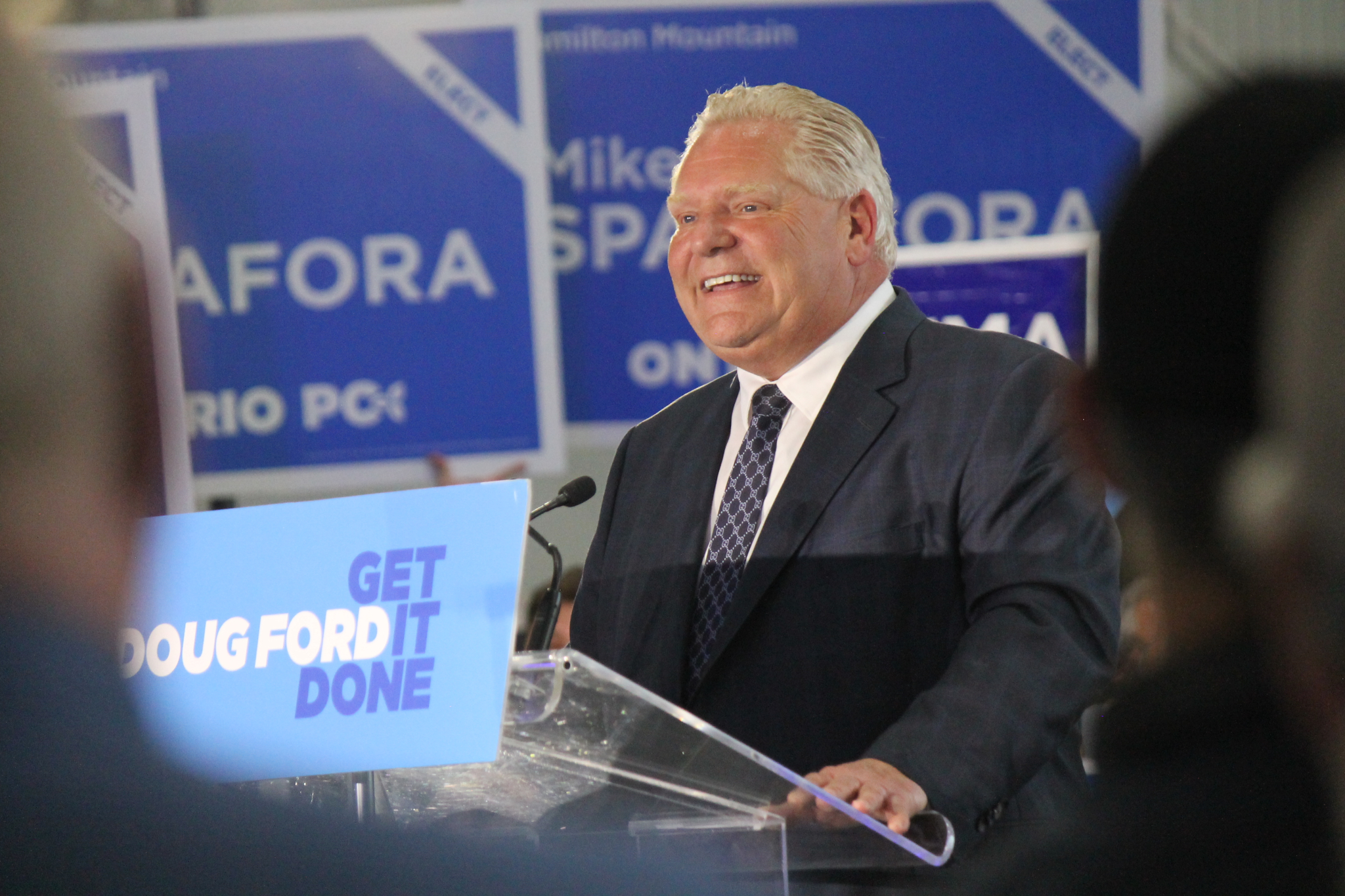 An airplane hangar is a very large place, one that is difficult to fill with people, and even more difficult to have appear full with only a couple hundred of them.

Progressive Conservative Leader Doug Ford closed out Thursday with a rally “to get it done” at a CargoJet hangar that abuts the airport in Hamilton, a traditionally labour-minded town and NDP Leader Andrea Horwath’s home turf.

The doors to CargoJet’s cavernous hangar opened at 6:30 p.m. but there was almost no one inside, save staff. Ford was not scheduled to speak until 7:30 p.m. and over the next hour, people arrived slowly, in ones and twos, some carrying Ford signs or wearing hoodies emblazoned with his election campaign mantra: “Get it done.” Upbeat music echoed through the hangar, where a very large plane was parked to one side.

One staffer rushed by, speaking urgently into his radio: “Guys! Where are they? I need bodies to come into the space!”

Attendees were shepherded to one side of the area roped off for the event, and supporters, plied with blue signs for Ford and local candidates, were ushered onto risers behind the podium where Ford would speak (and in front of the cameras that would capture his words).

Staff hustled people toward the podium, trying to move them closer together, though the odd person declined, citing COVID concerns. Those on the risers practiced a few cheers as 7:30 p.m. came and went.

It was the last event in a day during which Ford, vying for another round as Ontario’s premier, toured the Hamilton area. Ford made appearances in ridings where his presence could make a difference: Hamilton East, which erstwhile NDPer Paul Miller won in 2018 before being ousted from the party for what it termed a “pattern of troubling behaviour” that Miller refutes. Miller is now running as an independent against the NDP’s just-announced new candidate, 28-year-old Zaigham Butt.

Progressive Conservative Leader Doug Ford closed out Thursday with a rally “to get it done” at a CargoJet hangar that abuts the airport in Hamilton, a traditionally labour-minded town and NDP Leader Andrea Horwath’s home turf. #ONpoli #ONelxn

The hangar itself sits in the Flamborough-Glanbrook riding of PC Donna Skelley, who beat out the NDP candidate in the last election by fewer than 5,000 votes.

Prior to the rally, protesters blocked traffic heading into the hangar, waving signs at an intersection that read: “Doug Ford’s policies smell like farts,” “stop the sprawl” and “people before profits.” A generous contingency of Hamilton police showed up to help get traffic through.

Kaz Chrapka, of Hamilton, stood near the back of the hangar awaiting the leader’s arrival with a blue Ford sign. He said he came to support Ford, who’s “doing a good job.”

Diane Byron, also from Hamilton, echoed those sentiments. Ford, she said, has kept his word, fulfilled his promises and supported people when they needed it. During the COVID-19 pandemic, he was there every day on TV, updating the province and supporting those who needed it.

“He’s just always been there,” said Byron, a bartender. “Our bars went dark and he was there to back us up financially.”

She wants the premier to win a second term. “It would be nice to see how much further he’d go.”

“It’s been pretty exciting, to finally be able to participate,” said Lavell. She’s always supported the conservatives, following in the footsteps of her parents, long-time PC supporters. And she likes Doug Ford.

“He’s done a really good job,” said Lavell. “With COVID, he didn’t walk away, he stood up for people.”

At long last, with perhaps 200 people in the hangar, Ford’s bus pulled in as the custom-written campaign theme song that repeats the lyrics “get it done” — a lot — blasted and blue flood lights swirled.

Ford strode out, shaking hands, grinning, before taking the stage. He looked tired, and hot — it was in the mid-20s and humid — and he was sweating and a little hoarse as he began his speech.

As he has repeated so often on the campaign trail leading to the June 2 election, Ford vowed that his government is “saying yes” to building electric vehicles and batteries, highways and infrastructure. He mentioned the recent scrapping of license plate sticker fees, a pre-campaign move that will cost Ontario more than $1 billion. He said his government would get it done.

And then his nine-minute speech was over. The “Get it Done” song came back on and people filed out, walking along the East Cargo Road to their vehicles.

Durham votes to develop housing on 9,000 acres of farmland

What ever happens in this

What ever happens in this provincial election all I want is it to be peaceful and as honest as possible.
The Fact Checking so far by this and other media has be great to see.
Thank you for that CNO.