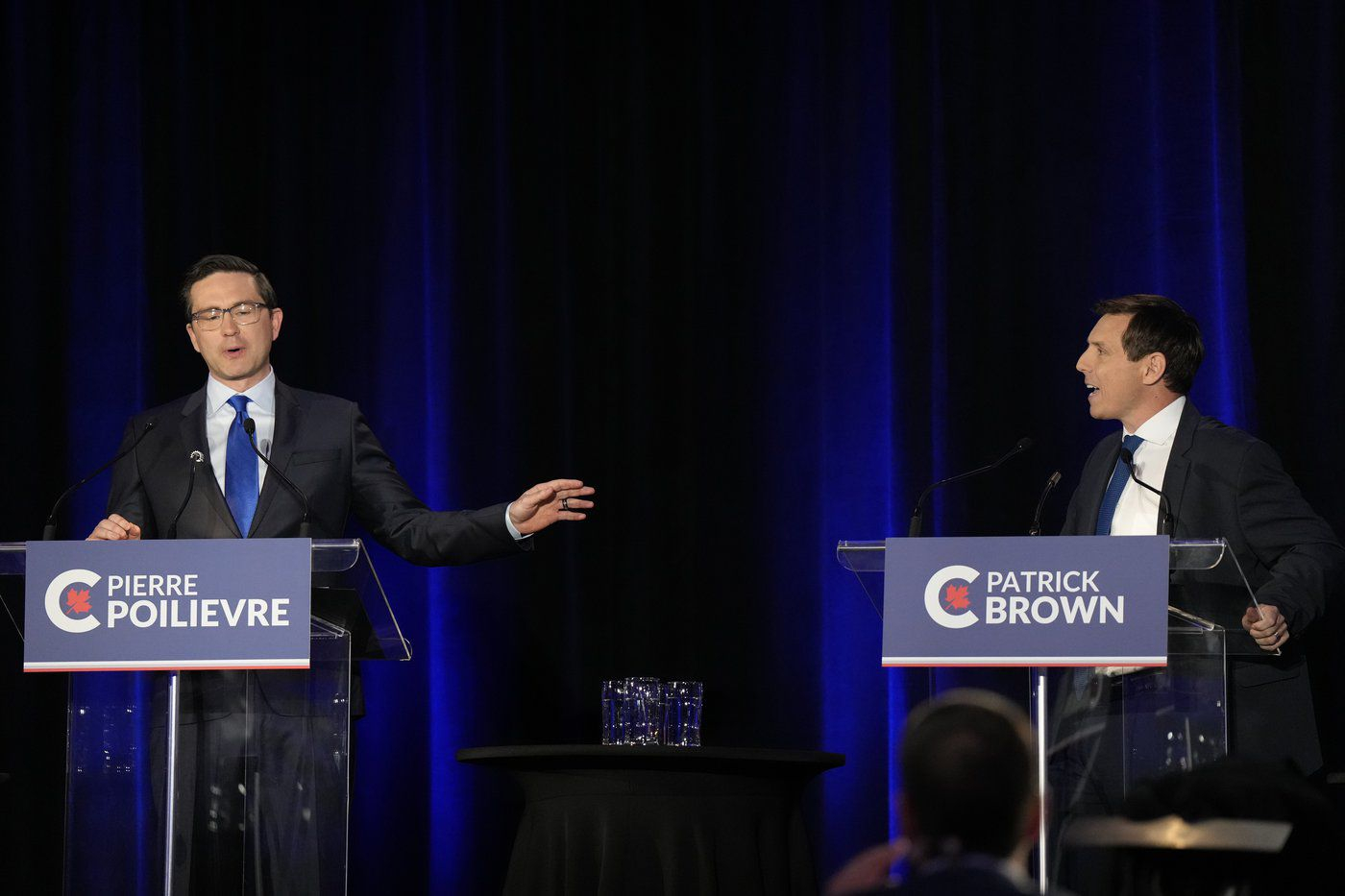 Conservative leadership hopefuls Pierre Poilievre, left, and Patrick Brown share an exchange during the Conservative Party of Canada French-language leadership debate in Laval, Quebec on May 25, 2022. Photo by The Canadian Press/Ryan Remiorz
Previous story
Next story

Candidates competing to lead the federal Conservatives traded barbs over contentious language laws, inflation and the trucker convoy in the race's only French-language debate Wednesday night, with Pierre Poilievre finding himself on the defensive through parts of the evening.

The debate took place in Quebec, a crucial region that has proven instrumental in the party's last two leadership races, despite only 10 of the 119 current Conservative MPs being based in the province.

"I am against Bill 21," longtime Ottawa-area MP Pierre Poilievre said on stage before several hundred Conservatives gathered in Laval, Que.

The legislation prohibits certain public servants in positions of authority from wearing religious symbols on the job.

Poilievre insisted he would not overturn the stance of federal Justice Minister David Lametti, who said earlier Wednesday that Ottawa would join a challenge to the law should it reach the Supreme Court.

Charest said that a prime minister "shouldn’t be neutral" on the legislation, while stressing Quebec's right to make laws within its jurisdiction.

Brown has spent the race campaigning against the religious symbols law, which he calls an affront to religious freedom.

Candidates took the stage one day after a contentious language reform bill passed Quebec's legislature. Bill 96 seeks to limit the use of English in the courts and public services, grant powers of search and seizure without a warrant to Quebec's language regulator and cap enrolment at English-language junior colleges, called CEGEPs, where students would have to take more courses in French.

Asked after the debate whether he would fight the legislation, Charest told reporters he would "speak to it" if elected prime minister, but held back on denouncing it.

Leadership candidate Scott Aitchison, an MP from rural Ontario, released a statement ahead of Wednesday's event pledging that a government led by him would work with Quebecers to see the new language bill and province's religious symbols law repealed, calling Premier François Legault's reforms "divisive."

The debate took place as a key deadline approaches.

The six candidates have until June 3 to sign up supporters as party members eligible to vote in the leadership contest.

The former Progressive Conservatives dominated in Quebec under former Brian Mulroney. The Conservative Party of Canada, which formed in 2003, has never elected more than a dozen MPs in the province. That high-water mark came in 2015, when former prime minister Stephen Harper led the party in the election but then stepped down after losing to the Liberals.

During the 2021 election, then-leader Erin O'Toole tried to change that, including by promising to enter into a new contract with Quebec that would better respect its areas of jurisdiction.

The new leader will be announced Sept. 10 at an in-person gathering of party members at a convention centre in downtown Ottawa.

On inflation, Charest jabbed Poilievre for having stated during the English-language debate earlier this month he would fire the Bank of Canada governor if he were elected prime minister.

Ontario MP Leslyn Lewis also joined Brown in attacking Poilievre for his embrace of the cryptocurrency Bitcoin as a solution to inflation.

"Il est dans les patates," she said in French, which got a laugh from the audience. The expression translates literally to mean that someone is in the potato patch, but is used to chide someone for being wrong.

Lewis was often reading from her notes during a debate where she said she is learning to speak French.

At one point, Brown said Poilievre's position on Bitcoin was similar to that of the leadership in El Salvador, which adopted Bitcoin as legal tender.

The International Monetary Fund urged the Central American country to drop Bitcoin as its official currency earlier this year, citing its volatility.

Roman Baber, who was an Independent Ontario lawmaker before the province headed into an election, also admitted he struggles in French.

“I know it’s very important for a prime minister to speak both languages," he said, adding he's had French lessons "almost every morning — I got up at 7 a.m. to do that." He requested patience from the audience.

Asked about organized crime in the province, Charest deemed it "ironic to hear Mr. Poilievre talk about law and order," citing his support for the protests that gridlocked downtown Ottawa for three weeks in February.

“Remember the Charbonneau Commission?" Poilievre said later in the debate.

He was referring into an investigation into corruption in the province's construction industry that was launched by Charest's government near the end of his nine years as Quebec premier.

Asked during the debate how to curb illegal arrivals into Quebec at the unofficial border crossing at Roxham Road, Poilievre said he is "against illegal entries, but at the same time I am for immigration," noting his wife came to Canada as a Venezuelan refugee.

Should he become prime minister, Poilievre pledged to reach agreements with provinces within 60 days to recognize professional qualifications for newcomers to Canada.

Charest stressed the need to renegotiate the Safe Third Country Agreement, which allows Canada to turn back potential refugees who show up at land ports of entry along the Canada-U.S. border.

The agreement says they must pursue their claims in the U.S., the country where they first arrived, but it only applies at official border crossings. Those entering at irregular crossings such as Roxham Road, near Hemmingford, Que., must be processed in Canada.

"You have to clean up the department to give a decisive boost," he said.

Brown attacked Poilievre by accusing him of not publicly condemning the "white replacement" conspiracy theory espoused by Pat King, a leader of the Ottawa convoy protest. (Poilievre denounced both the conspiracy theory and King in a statement to The Canadian Press last week.)

— With files from Stephanie Taylor in Ottawa