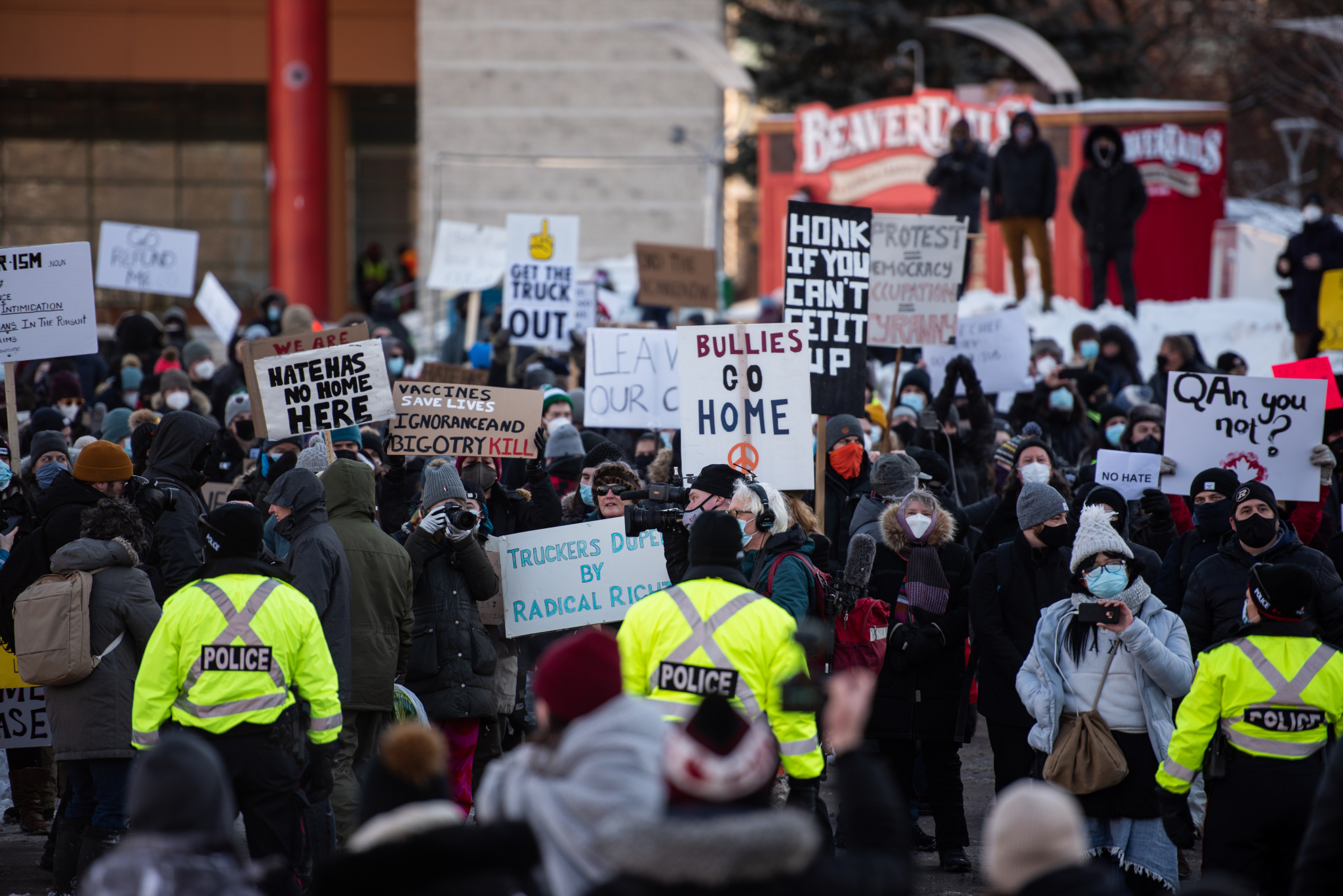 Counter-protesters are seen during a rally against the trucker convoy in Ottawa on Feb. 5, 2022. Photo by Spencer Colby / Canada's National Observer
Previous story
Next story

The streets of downtown Ottawa are no longer blocked with trucks and peppered with hate symbols, but residents are not ready to rest while the extreme rhetoric of the so-called “freedom convoy” permeates Canadian politics and society.

“This will emerge again,” said Andrea Harden, an Ottawa resident who participated in many counter-protests against the month-long occupation. “The question for me is when and where?”

Less than one month ago, a convoy of motorcyclists continued the work of the “freedom convoy” by protesting public health measures in Canada’s capital, but unlike the demonstration that inspired the motorcycle convoy, they did not linger.

One protester carried a noose attached to two flat sticks printed with the words "treason" and "Trudeau." Trudeau says the safety of Canadians participating in democracy should never be jeopardized by the kinds of racist insults and threats of violence witnessed at the fundraiser.

Federal NDP Leader Jagmeet Singh faced verbal abuse in Peterborough, Ont., earlier this month when protesters shouted expletives at him and called him a "traitor."

The freedom convoy’s extended stay in the nation's capital and police inaction led many citizens to push back with counter-protests, a class-action lawsuit and mutual aid. When a protest in solidarity with the freedom convoy rolled into Vancouver, it was met by a group of cyclists who blocked the road to try to keep the convoy from disrupting access to hospitals.

Harden believes that if armed with the right tools, communities can come together to challenge the rise of the far-right exemplified by the freedom convoy. She recounts a successful counter-protest in Ottawa — dubbed the “Battle of Billings Bridge” — where a few dozen neighbours decided to block an intersection to prevent more trucks from joining the convoy. Over the course of the day, a small but determined group of 30 grew into a community-wide resistance of over 1,000 frustrated people saying “enough is enough,” Harden said. Throughout the roughly 10-hour event, counter-protesters managed to turn trucks away and got protesters to give up their flags, jerry cans and other “various paraphernalia.”

A national movement was birthed out of citizen resistance to the Ottawa freedom convoy and now the Community Solidarity Project wants to arm communities with the resources to challenge far-right rhetoric and push for systemic change. #FreedomConvoy

The community’s spontaneous resistance to the convoy inspired a national project seeking to arm communities with tools to challenge individualistic far-right rhetoric and long-standing systemic issues. In Ottawa, organizers were teaching people how to conduct themselves peacefully and how to be legal observers during rallies to make sure folks are protected, said Diwa Marcelino, national organizing lead of the Community Solidarity Project and member of the Council of Canadians board of directors.

“Looking at the experiences of folks in Ottawa, Toronto (and) Winnipeg, we have found ways that we can peacefully talk to folks … across the divides,” said Marcelino. “We have more in common with the people protesting on the other side of the street than folks like Elon Musk, who is promoting the convoy.”

At the Battle of Billings Bridge, Harden and community members were able to engage with members of the convoy and discovered many were apparently shocked at the frosty reception. Many expected to be welcomed with open arms, which lends insight into the social media echo chambers where the convoy was organized, said Harden.

The national project will seek to provide communities with resources to directly respond to events and address underlying systemic issues that contribute to the rise of the far-right. The Council of Canadians is supporting grassroots organizing in communities by sharing contacts and offering webinars and other forms of political education. There are also ready-made templates for posters to be used at rallies so grassroots groups can tailor the message to the event. Ottawa organizers put these posters around the city in anticipation of the “Rolling Thunder” motorcycle convoy.

To speak across the divide and penetrate those echo chambers, people need an alternative message to rally around, said Harden, who got involved with the Community Solidarity Project as a senior strategist with Emdash, a progressive strategic communications firm.

The slogan “together we can” cuts to the root causes of why people are struggling and acknowledges that while there are problems in our society, the answer isn't hate or putting folks in a position where the vulnerable are sacrificed to the COVID-19 pandemic, she said.

By coming together to demand economic justice, climate justice, health care for all, affordable education or reconciliation, communities can challenge the individualistic narrative of movements like the freedom convoy, said Marcelino.

A goal of the national project is to make sure people aren't left in the far-right echo chambers, said John Cartwright, chair of the Council of Canadians. Giving people who are frustrated about the pandemic, cost of living or other issues a space to put their energy into hopeful and inclusive work instead is key, he said.

Cartwright says the current situation is “a huge battle of ideas” and that the coming years will be a time of “deep uncertainty” in Canada.

Creating spaces where people can voice their unhappiness and work toward real solutions without dividing and scapegoating is paramount, he said. The Community Solidarity Project lays the groundwork to pursue systemic solutions.

The national project is uniting countless social justice groups, from health-care coalitions to student groups to unions. “It's very inspiring to see all these groups coming together of all faith backgrounds, of all demographics, to work together towards this,” Marcelino said.

Ariel Troster is an Ottawa resident who took part in the Battle of Billings Bridge and other local events.

“It felt incredibly empowering to hold those trucks back from entering our downtown neighbourhoods for a day,” said Troster, who intends to run for Somerset Ward city councillor. After three weeks of complete police inaction, this spontaneous citizen movement stepped up when the city, police and all levels of government failed to, she said.

At the Battle of Billings Bridge, Troster felt “very worried” because there were “violent and criminal elements associated with the convoy” and “a lot of white supremacist extremism.”

As a queer Jewish woman, Troster was deeply uncomfortable seeing swastikas and Confederate flags on display in the city.

“We know that racism is very much alive and well in Canada, but this is just this extreme explosion,” she said.

Though the convoy is long departed, communities are dealing with residual trauma, said Troster.

“My daughter's school was right in the middle of where the convoy was gathering. There were people parking trucks and carrying jerry cans of fuel right behind her school. There were people yelling at kids in the schoolyard, and it was terrifying for her,” said Troster. She added that schoolchildren in the area — many of whom are immigrants, refugees or have disabilities — were terrified by protesters hurling hateful slurs at them on their way to school.

Her nine-year-old daughter, Daphne, had a “really significant” panic attack after hearing the convoy was going to target schools, said Troster.

It was “incredibly upsetting” to see her daughter’s mental health deteriorate so profoundly, and Troster had to pull her from school for a few days.

It took weeks for Daphne to feel safe walking down the street again.

“I hope that this is a lesson for other communities to stand up to and stop white supremacy when you see it, to not welcome it into your communities, to not allow it to fester and take up residence,” said Troster. Citizens took care of each other, both on the front lines at counter-protests and behind the scenes. “There was a lot of queer and trans people and disabled people and people of colour who were taking care of each other, delivering meals, checking in, doing safe walks,” she said.

This “hate-filled, conspiracy-filled movement” is deeply concerning, Troster said, pointing to the federal Conservative leadership campaign as an example of “racist dog whistles being adopted by mainstream politics.”

The recent verbal attacks on NDP Leader Singh are just one example of the temperature heating up, but we can cool things down by fighting for better social safety nets so people are supported and less likely to be driven to extremes, she said.

Part of this is fighting the simplistic Conservative messaging that promises freedom for all and one-off rebates to put a few hundred dollars in our pockets, said Troster. She said a few bucks here or there means nothing compared to an actual pharmacare program, dental care program, paid sick days and investment in other social supports for people.

Although the convoy was a “horrible experience,” Troster said gathering at counter-rallies and solidarity picnics was “really comforting because it was nice to be together in the community again, and in a community that was opposed to this kind of extremism.”

One continuing damage that

One continuing damage that the so-called Freedom Convoy has caused is that it has stolen the sense of quiet pride I and many Canadians have always felt about the Canadian flag. When I see one now I wonder: A convoy supporter? July 1 is coming up. I feel constrained showing the flag, for fear I'll be taken as one of them.