By Natasha Bulowski | Analysis, Politics, Ottawa Insider | May 31st 2022
#3 of 6 articles from the Special Report: The Influencers 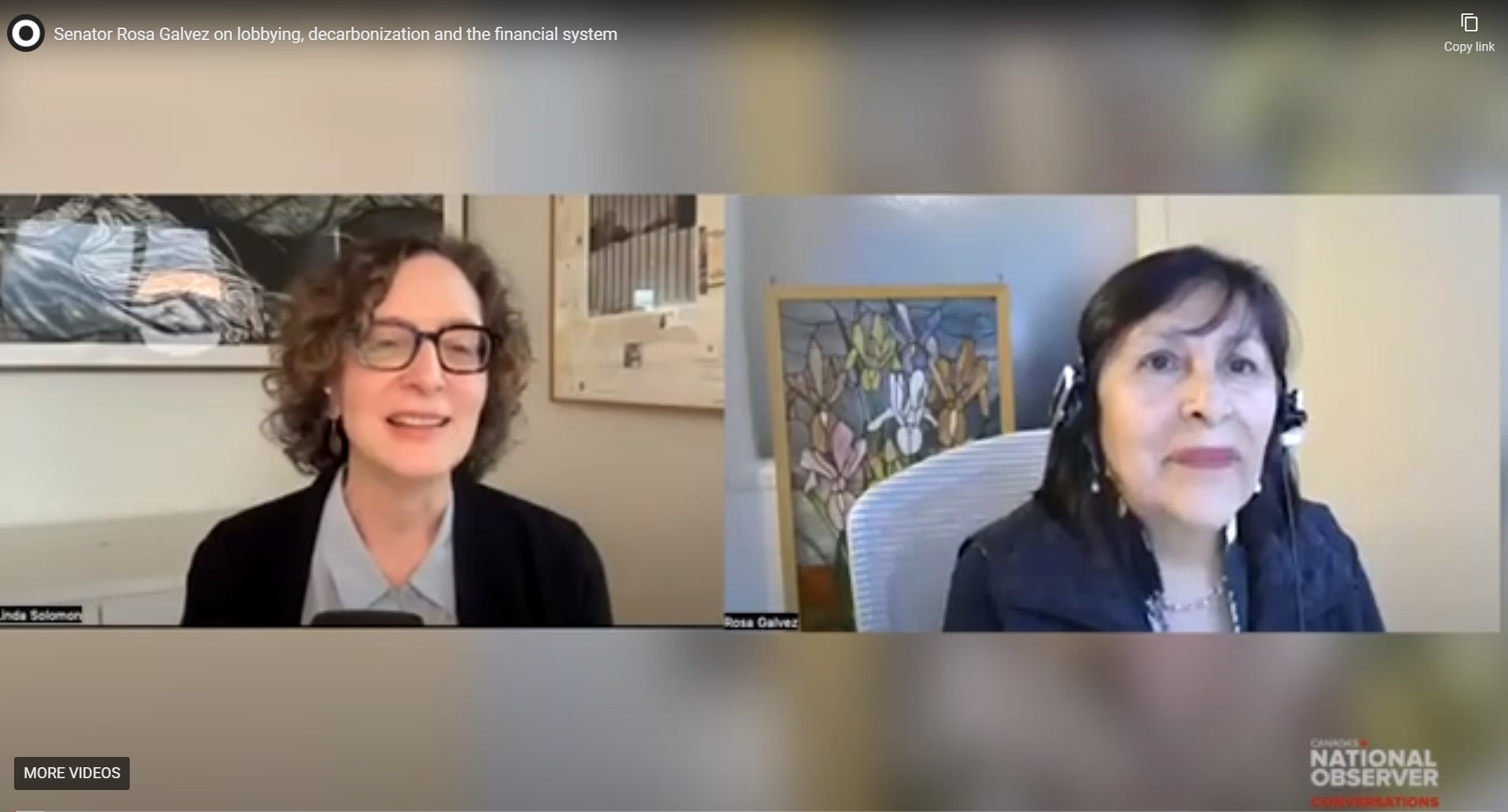 When she joined the Senate in December 2016, Galvez was struck by the influence lobbyists have on environmental regulation and the imbalanced nature of government consultations.

“The people that have a stronger presence (are) people from the big corporations, polluter corporations, and they come with a big group of lawyers, ready-made amendments, and they dominate the dialogue,” Galvez told Canada’s National Observer editor-in-chief Linda Solomon Wood. Wood hosted Galvez in a live Conversation on May 26 to talk about lobbying, decarbonization and the financial system.

An expert in pollution control and its effect on human health, Galvez serves on both the standing Senate committee on energy, the environment and natural resources and the national finance committee. As it stands, Canada’s environmental regulations don’t prevent pollution — they legalize it, the former environmental engineer and current University of Laval professor told Wood.

Part of the reason for this is industry lobbying, said Galvez.

Sometimes, she said, the federal government consults with a wide variety of businesses, organizations, citizens and other stakeholders. But not all the time.

“The government (has) this tendency to think that the industry, the sector that is going to be regulated, has more experience, has expertise, and so, therefore, they know more,” said Galvez. Over time, there has been a reduction of ministers’ scientific expertise or specialties and this can lead to the government allowing industries to mostly regulate themselves, she said.

The 2013 Lac-Mégantic train disaster — which killed 47 people — exemplifies the danger of letting industry “auto-regulate” itself, Galvez told listeners on Thursday evening. Similarly, she said the oil and gas industry is failing to deal with oilsands tailings — a thick, toxic, sludge-like mixture created through the mining and extraction of bitumen.

In Galvez’s experience, when bills impacting environmental regulations are moving through Parliament, the fossil fuel lobby works tirelessly to influence the outcome. Galvez described frequent visits from oil and gas lobbyists when a piece of legislation designed to make impact assessments for major energy and transportation projects more stringent was making its way through the Senate.

@SenRosaGalvez sat down with @Linda_Solomon to discuss the outsized impact industry lobby groups have on federal policy. The remedy? Galvez says the Lobby Act needs an update and policy consultations must include voices outside industry.

Earlier this year, Galvez tabled a bill that would require financial institutions to align with Canada’s international climate commitments. Some people compare her mission to the story of David and Goliath, but as Galvez points out, David emerged victorious. Because the bill is based on evidence and aligned with international science, lobbyists opposed to her bill will have to think carefully about how to go against it, she told Wood.

“We have to find ways of having a more democratic way of consultation with all the stakeholders,” said Galvez. This means listening to people and groups with different worries and priorities than industry.

“The lobbying approach evolves with time, and we need to keep up with this evolution,” said Galvez.

To do this, we must modernize Canada’s Lobbying Act, said Galvez. Hopefully, the government will do so, but if not, “the senators must take the leadership and do it,” she said.

Her assertion is backed up by a 2019 Corporate Mapping Project report that warned the fossil fuel industry has a clear advantage over environmental non-governmental organizations because of its financial resources.

“Some people have megaphones and they can speak louder, and the common citizen can't,” said Galvez, adding that Canadians can write to their representative or contact her office to get ideas and information on how to make their voices heard by the government.

The full interview is available to view here.

Senator Galvez is right on.

Senator Galvez is right on. lobbyists, parasitic "action" committees, funded by the ultra rich are doing their utmost to sink representative and responsible governance , sometimes known as democracy.

Every great fortune is founded on a great crime. Never forget the origins of the crass, clumsy, greedy would- be rulers of the universe. Nothing will satiate their lust but total destruction.