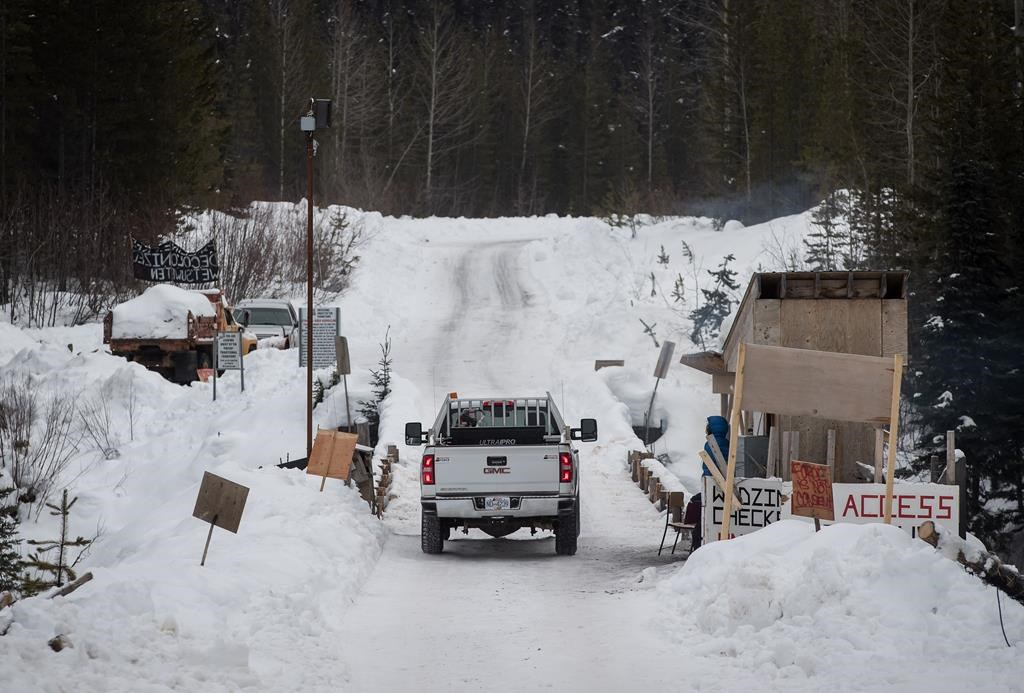 A Coastal GasLink contractor drives over a bridge on a remote logging road near Houston, B.C., on Thursday, Jan. 17, 2019. File photo by The Canadian Press/Darryl Dyck
Previous story

The British Columbia Prosecution Service says 15 people are being charged with criminal contempt of court following protests last fall over a natural gas pipeline being built near Houston in northern B.C.

The prosecution service says it will take four more weeks to decide if there’s enough evidence to charge an additional 10 people, while two others who were arrested won’t be prosecuted.

Court documents say all 27 people were arrested over six days between September and November along a forest service road leading to a work site for the Coastal GasLink pipeline.

Those charged are alleged to have breached a B.C. Supreme Court injunction granted to Coastal GasLink in 2019 that prohibited blockades or interference with the company’s construction activities.

The 670−kilometre pipeline is expected to carry natural gas across northern B.C. to the LNG Canada terminal in Kitimat.

The project has sparked protests across the country in recent years by those in support of Wet’suwet’en hereditary chiefs who say it violates their traditional laws, while the elected council of the Wet’suwet’en First Nation and others nearby have agreed to the project.

In a statement read in B.C. Supreme Court on Wednesday, the prosecution service says it worked closely with RCMP to obtain investigative materials and considered correspondence from both a lawyer for some of the defendants and the Union of B.C. Indian Chiefs.

The review concerning the 10 defendants whose fate has yet to be determined will focus on their knowledge of the terms of the injunction, it says.

There wasn’t enough evidence to show the two people who won’t be prosecuted were aware of the terms of the injunction, it says, even if their conduct had potential to infringe upon it.

"Because of the way matters arose, police did not have a copy of the injunction at the time of the arrests and were only able to paraphrase it orally after the protesters had been arrested," the prosecution service says in the court documents.

The guidelines the Crown uses to determine charges in cases of civil disobedience say it’s not always in the public interest to pursue criminal contempt charges.

Factors favouring prosecution may include, but aren’t limited to, violent conflict resulting in physical harm, serious property damage, an assault on an officer, or less serious but persistent offences that significantly obstruct public access.

The Crown must prove beyond a reasonable doubt that the accused defied or disobeyed a court order in a public way.

A statement from the Gidimt’en checkpoint, a logging road camp that’s led by members of one of five clans within the broader Wet’suwet’en Nation, alleges they are experiencing an escalation of harassment and intimidation on the territory.

The camp issued a call to supporters last week saying it needs help to prevent Coastal GasLink from drilling under the Wedzin Kwa river, also known as the Morice River, which it says violates Wet’suwet’en rights and title.

Coastal GasLink says in a statement that it has dealt with numerous violations of B.C. Supreme Court injunctions since 2018 that are meant to allow safe access and construction of the project.

It says its work is fully authorized and permitted by the federal and provincial governments, with local Indigenous support, and the company agrees with the charges.

"It [CGL] says its work is fully authorized and permitted by the federal and provincial governments, with local Indigenous support, and the company agrees with the charges."

Why can't CGL, other fossil fuel companies / projects, provincial and federal governments, and the judiciary stop being so disingenuous? 1) "Fully authorized and permitted" doesn't make it safe; they know their line of business is dangerously disrupting the climate and destroying ecosystems.

2) When it comes to "local Indigenous support," they can no longer claim ignorance of the difference between reserve governments and traditional territorial governance. A friend of mine calls it "pignorance": pretend ignorance.

3) "and the company agrees with the charges." I guess so, eh? After all, the charges were laid by their own personal (though taxpayer-funded) police force and prosecution service.

My gawd, we settlers are a nervy bunch. It wouldn't be so bad except that we're literally destroying the life-sustaining gifts of the biosphere. Shame, shame, shame on us ... and thank you to those brave enough to get arrested for defending their Mother.

p.s. Won't it be a fascinating day when a judge, a prosecutor, a police officer or an elected official says, "Hell, no, I'm not going to arrest that person. They're trying to safeguard my child's future."