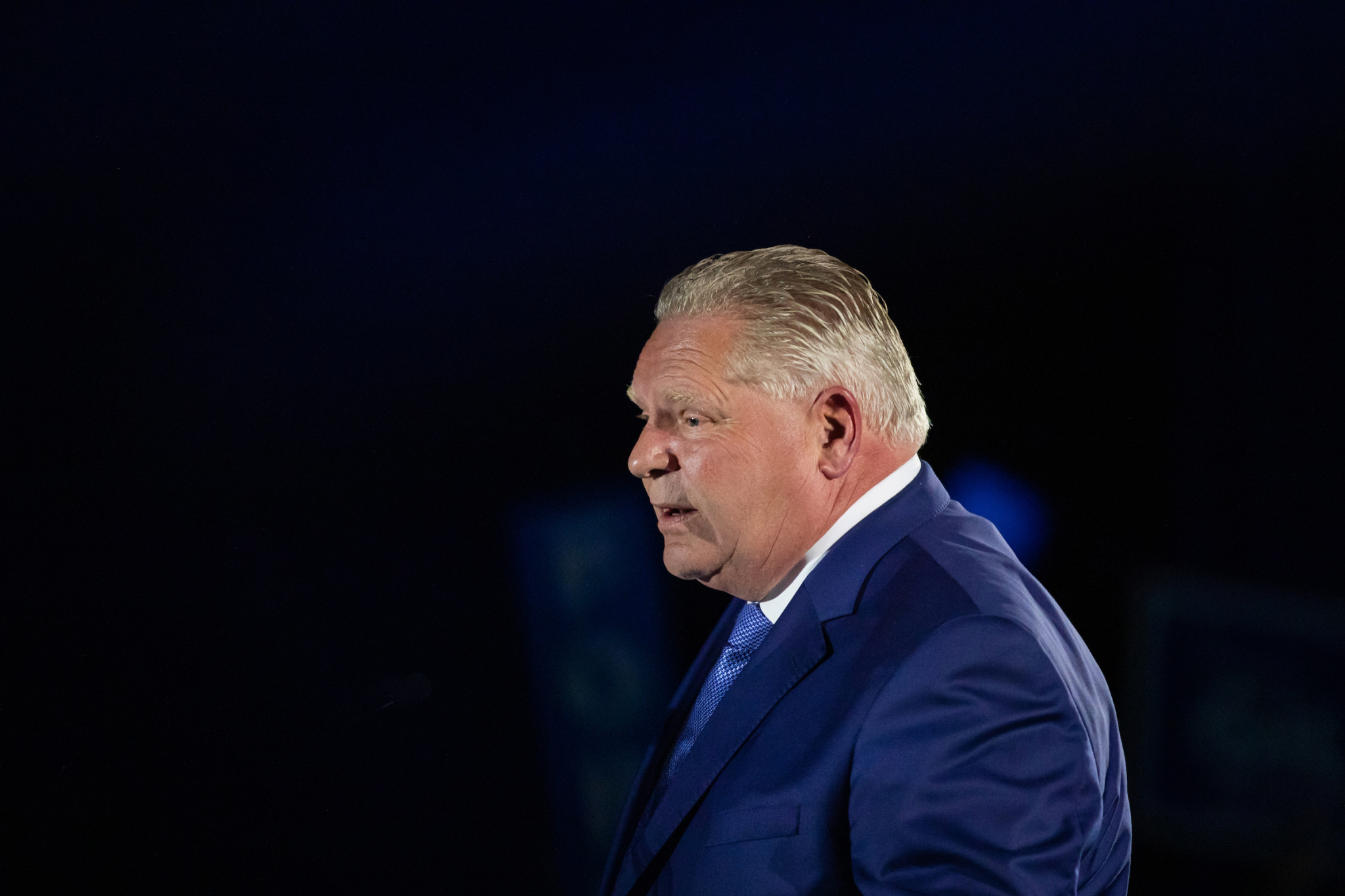 For most people, the last two-plus years of the COVID-19 pandemic are ones they’d just as soon forget. As it turns out, they’ve also been a gift for Ontario Progressive Conservative Leader Doug Ford.

In the process of trying to forget the pandemic, the public seems to have also forgotten who Ford was going into it: an incompetent bully who treated the premier’s office like his personal fiefdom. Now, he’s emerged with the new political image of a kind and empathetic (and yes, still incompetent) leader who’s helped the province weather a difficult storm. That collective amnesia looks like it will propel him to an easy re-election win on Thursday.

The two main opposition parties bear some responsibility for that, of course. Both have seemed far more interested in fighting each other for second place than trying to knock the Progressive Conservatives out of first, and neither has presented the sort of sustained critique of the last four years that would make enough voters think carefully about giving the PCs another four in power. If the results are anything close to the PC majority most polls are previewing right now, both NDP Leader Andrea Horwath and Ontario Liberal Leader Steven Del Duca should begin updating their respective resumes.

The media hasn’t exactly helped them over the last few weeks, mind you. Most of the coverage has been conspicuously favourable to the governing party, with the Toronto Star — under new management, it bears repeating — suddenly acting as a pro-Ford mouthpiece. Its decision to run a puff piece on his “evolution” in the midst of a campaign, much less put it on the cover (and above the fold, no less), was a telling decision. A column by David Olive on the last Saturday before the election, in which he suggested Ford “could be one of the most capable economic managers in Ontario history,” read like an in-kind donation to the PC campaign. And the less said about the bizarre amount of attention paid to The Keg, the better.

Most of this, though, is about Ford and his unique ability to distract the public from his government’s high-profile failures. It has failed to track $4.4 billion in COVID-19 spending, allowed the pandemic to run rampant through the province’s long-term care homes and lost 14 court cases on everything from the carbon tax and his government’s gas pump stickers to its refusal to release mandate letters for its cabinet ministers. Heck, it couldn’t even get the new provincial licence plates right — and that’s coming from someone whose family made its money in the label and printing business.

Even during this mostly sleepy campaign, Ford has done things that might have woken up the public in other provinces. When asked how his government intends to address climate change, he said the PCs would do it by building new and bigger highways. “One of the worst examples of pollution, go stand on the bridge of the 401 and watch bumper-to-bumper traffic,” he told reporters at a May 24 event. “That’s why we’re building roads and bridges and highways to get people home quicker. They don’t have to sit in gridlock and smell someone else’s fumes.”

That sort of obvious idiocy pales in comparison to the arrest of a lawyer and journalist at one of his own events. Caryma Sa’d, who extensively documented the occupation of Ottawa earlier this year, was quickly arrested at a Ford rally near the Hamilton airport — an event for which she RSVPed. Ford’s response, when asked about the incident? “I want to thank the Hamilton police. They always have a challenging job — all our police officers do — and I just want to thank them for their support and how they handled things.”

And yet, according to a recent Abacus Data poll, two-thirds of Ontarians rate him as a “great,” “good” or “OK” premier. As CEO David Coletto said, “incumbents don’t lose with these kinds of numbers.”

It’s a stark contrast to how quickly and decisively the public turned on Alberta Premier Jason Kenney, whose personal popularity is only slightly higher than the COVID-19 virus itself. While Kenney has shown a talent for turning his personal strengths into political weaknesses, Ford manages to do the opposite. His lack of intellectual polish and near-total indifference to policy has endeared him to as many voters as it’s repelled, and it’s made him — a son of obvious personal and political privilege — seem far more relatable than he has any right to be.

In other words, Ford is the Billy Madison of premiers. He has managed to take everyone’s comically low expectations of him and turn them into an asset. But while Billy Madison was a comedy, what Ford could do with a second majority term is no laughing matter.

His government will build Highway 413, which will destroy local wetlands and greenspace and increase Ontario’s greenhouse gas emissions, all in the name of shaving a few seconds off the commutes of drivers. (Oh, and adding millions of dollars to bank accounts of Ford-friendly developers.) It will continue its attack on public services like health care and education, as well as the people charged with delivering it. And it will continue to be a government that privileges business above almost every other consideration.

So why is his party sailing towards another majority? As Matt Gurney said in a piece for TVO, “maybe we’re all just tired.” Maybe. But Ontarians might find another four years of Ford’s mediocrity even more exhausting when it’s all said and done.

When the pandemic started and

When the pandemic started and Doug Ford split with Trump and took it seriously he got a big boost. That's how low the expectations were. He has done a lousy job - horrific in the LTC homes - and the "movement" ideologues around him are waging war on teachers and the union's etc. (In service of their Pope, Charles Koch) Not to mention the obvious idiocy of these highways. The author's right that the opposition have not glued Fords failings to him. Andrea Horwath may be a nice lady but I watched one campaign stop the other day and she stumbled over her words and is quite uninspiring. Del Duca, who hid out until the writ dropped, is in trouble in his own riding. At least he seemed to revitalize the Liberal Party somewhat but that won't pay off until the next election. In short, it's not looking good for Ontario for the next few years...unless you're a developer!

Thanks to inflation, it might not be looking good for developers, either.

Memory problems amongst Ontarians abound. Loads of the worst voters see not having to pay for license plates from now on to be a fair and reasonable solution since Ford can't seem to make them right - twice. And, can anybody at all remember why we were in a rush to punish Kathleen Wynne for not being perfect like Dougie?

At this point, Ontario

At this point, Ontario residents cannot reasonably accuse the west of moving right, nor can Atlantic Canadians. Northern Ontario might be an exception to this.

(On the opposite end, BC and Saskatchewan residents are unable to claim that eastern Canadians are moving left, but that's for another time.)

Doug Ford's winning this time for the same reasons he won last time:
He lied about everything, and did most of his "communicationss" through his own TV channel.
People live busy and tired lives. When they're not keeping body and soul together, for the most part they prefer entertainment to anything else.
Very few people are ecological or political "junkies." Fewer still have any idea how the systems of governments or elections work, let alone how "news" works, how to guess what's true amongst all the competing exaggerations, lies and denials, who leaders answer to and why ...
How are they expected to make sense of anything except to assume everything is correct that supports their first knee-jerk reaction to whatever they suspect might be the author of their "unhappiness": whoever'll stick it to their favorite scapegoat is their go-to guy.
But remember, they have no basis of fact against which to measure things. I considered making a chalkboard of my garage door, changing the fact-checking daily. But I got lazy, I guess.
Maybe next time.